It’s human nature to be friendly and trusting, we want to assume people are generally good, and we want to help out others where we can.

However this makes us prime for social engineering attacks – from calling up pretending to be the IT help desk asking for passwords, to not questioning people who we don’t know walking around the office carrying laptops.

Computer geeks tend to be a little more security minded, but even we’ll do stupid things like open the door for the pretty girl who smiles at us without a keycard from time to time, whereas we might question that seedy looking guy in a hoodie due to incorrect assumptions we all make.

Living in an apartment complex in Auckland has been interesting, since the complex is quite security minded and there is camera surveillance at the entrances and magnetic card access to the building.

Whilst an apartment complex means your neighbor count increases dramatically, you rarely ever meet or talk with any of them, resulting in little idea whether or not someone is a neighbour or a stranger trying to sneak in. In contrast, when living in a housing suburb you might not know everyone, but there’s a lot less foot traffic normally, and having someone sneaking around peering into windows gets noticed pretty quickly.

With this in mind, I’m one of those annoying few people who refuses to let people tailgate me into the complex unless I can clearly see their access card & key already in hand.

You get some interesting stories from people trying to explain why I need to let them in, such as “My mum/dad/husband/wife isn’t home so she can’t buzz me in”, to which one must wonder what good getting into the building will do if they don’t have anyone at home to let them into the apartment itself (also get a key sorted people!).

At times this leads to feeling a bit like the apartment nazi, however earlier this week I got my approach validated: 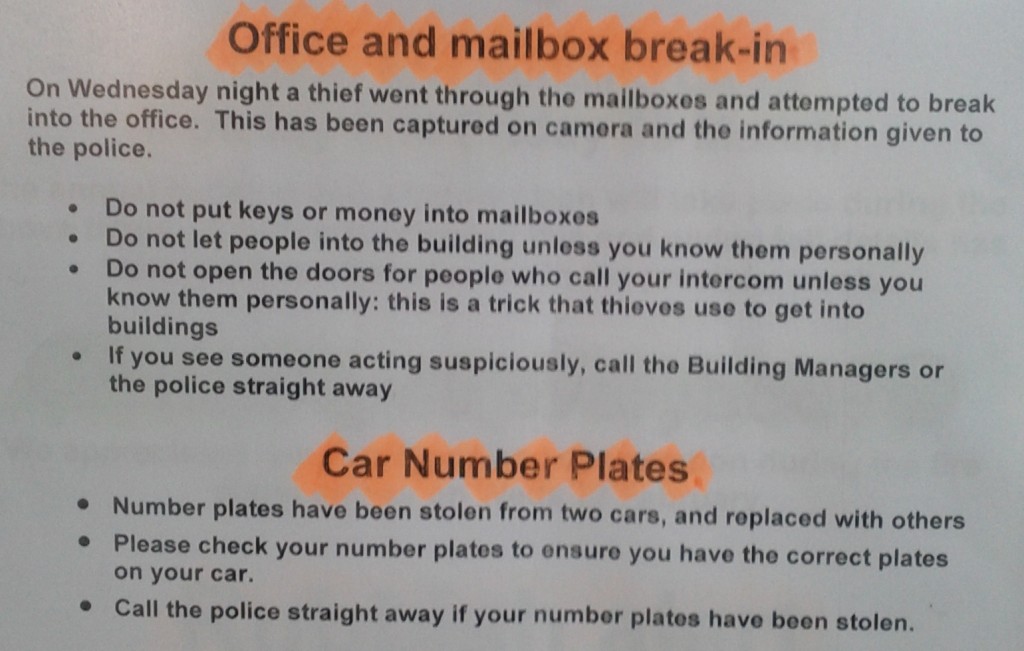 An A4 sheet on the wall is what appears to pass for an incident report these days.

The car one is particularly annoying, the problem with the garage door system is that they take forever to open or close, leading to a large window for anyone to follow through after a car has already gone.

However maintaining door entry security is a lot easier and just requires a bit of forcefulness with people who just attempt to tailgate in, even it seems a bit mean at times.

It’s a good reminder that these exploits do happen in daily life and that we should be aware of them and keep mindful.