On my final day in Christchurch Lisa’s parents were heading off in the morning, so we decided to take our rental car and explore the city a bit before heading to the airport in the early evening. 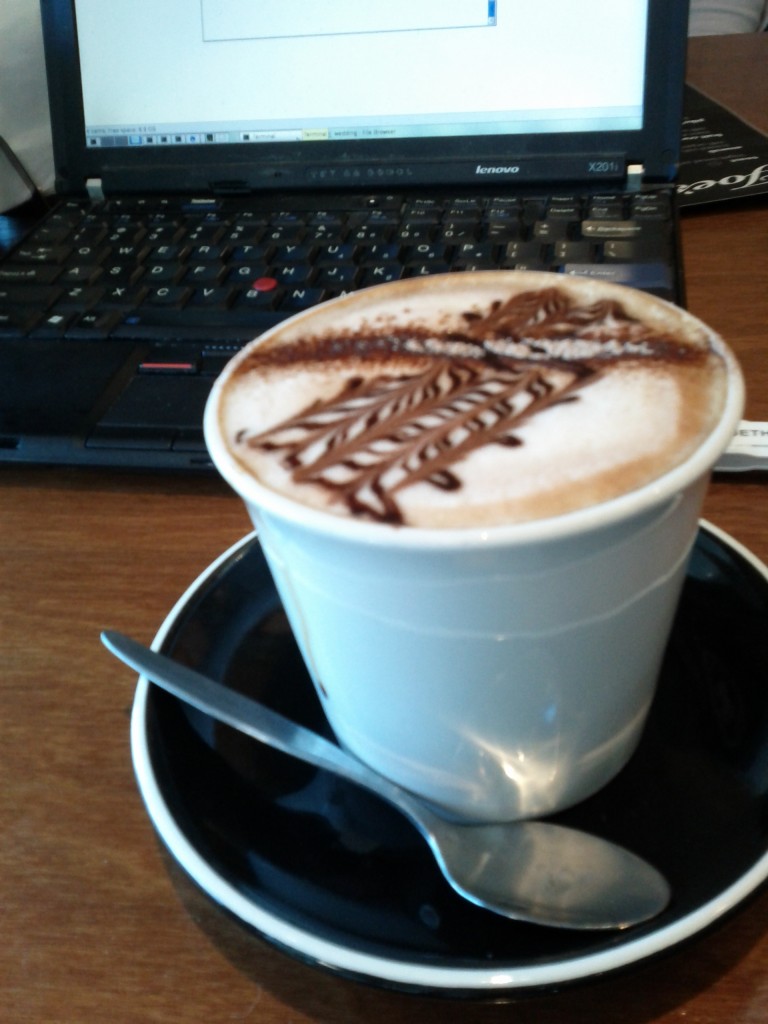 Coffee. Linux. All systems are go!

After brunch, we headed up the Cashmere hills to Victoria Park to stop for some touristy viewing and photographing of the city. After living in Wellington, it’s so weird seeing such a flat city for a change. Flat land, then snowy mountains, as far as you can see. View of the CBD itself.

Panorama from Victoria Park looking out over suburbs and mountains.

Panorama from Victoria Park looking out over the CBD. 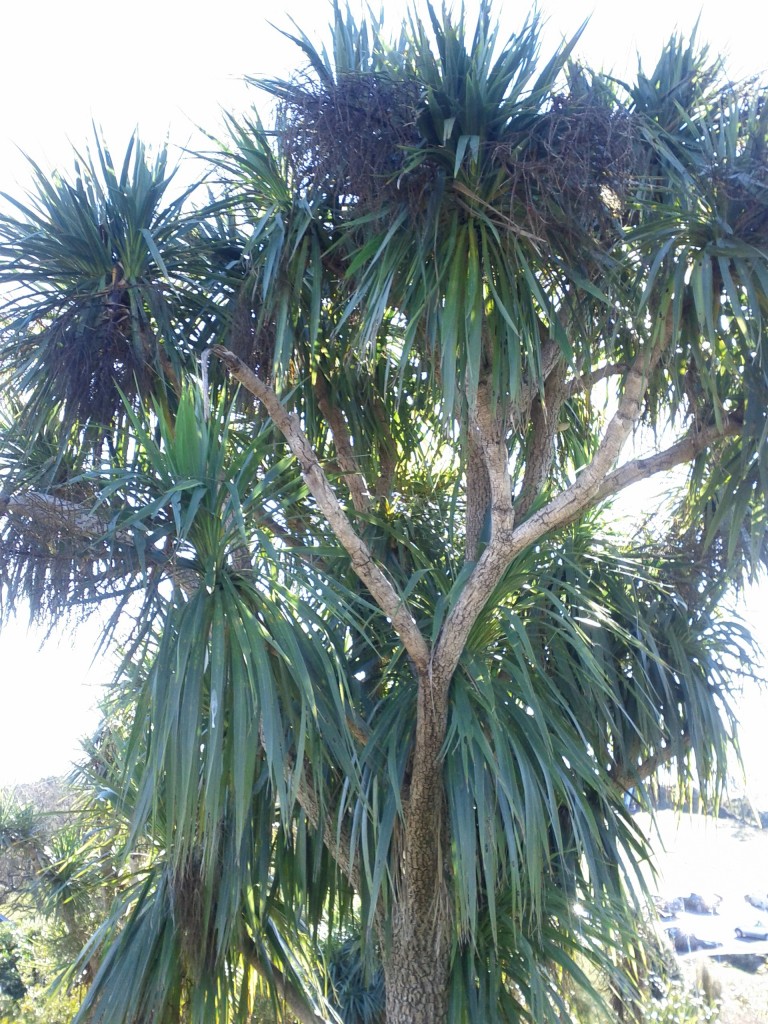 After stopping at the park, we headed off and down around the coast to Port Lyttelton, a commercial port supplying Christchurch and the greater South Island region. Whilst it was interesting to go take a look, there’s not really a lot in Lyttelton other than the port, lots of heavy trucks, the longest road tunnel in NZ and one pretty dead looking town. 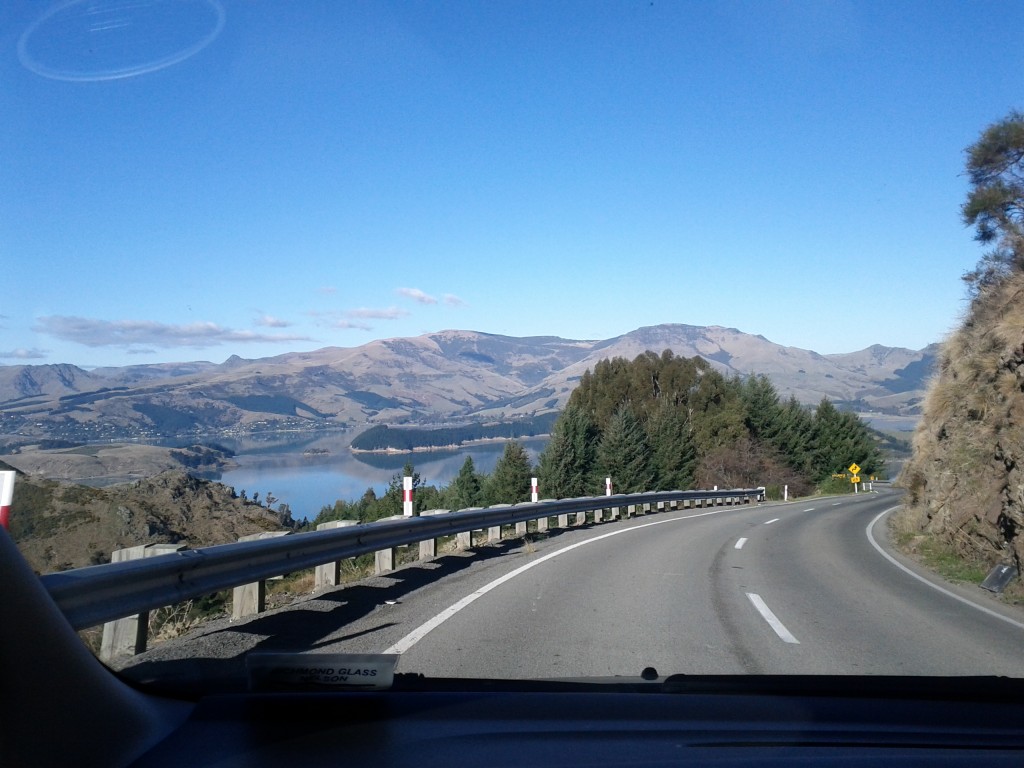 Heading down towards Lyttelton Harbour 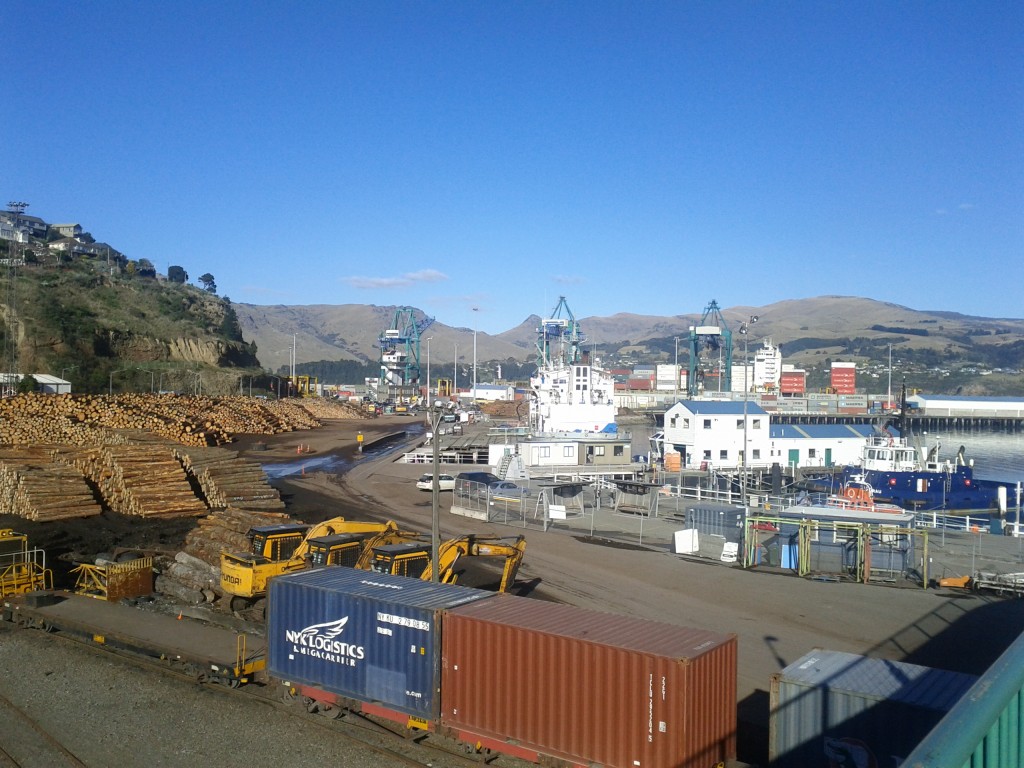 Trains! Boats! All the win!

After cruising through Lyttelton and not finding much, we headed through the road tunnel full of loud thundering trucks, before making our way around to Sumner. Looks like the Matrix had a rendering glitch and clipped the right side of the traffic light off.... 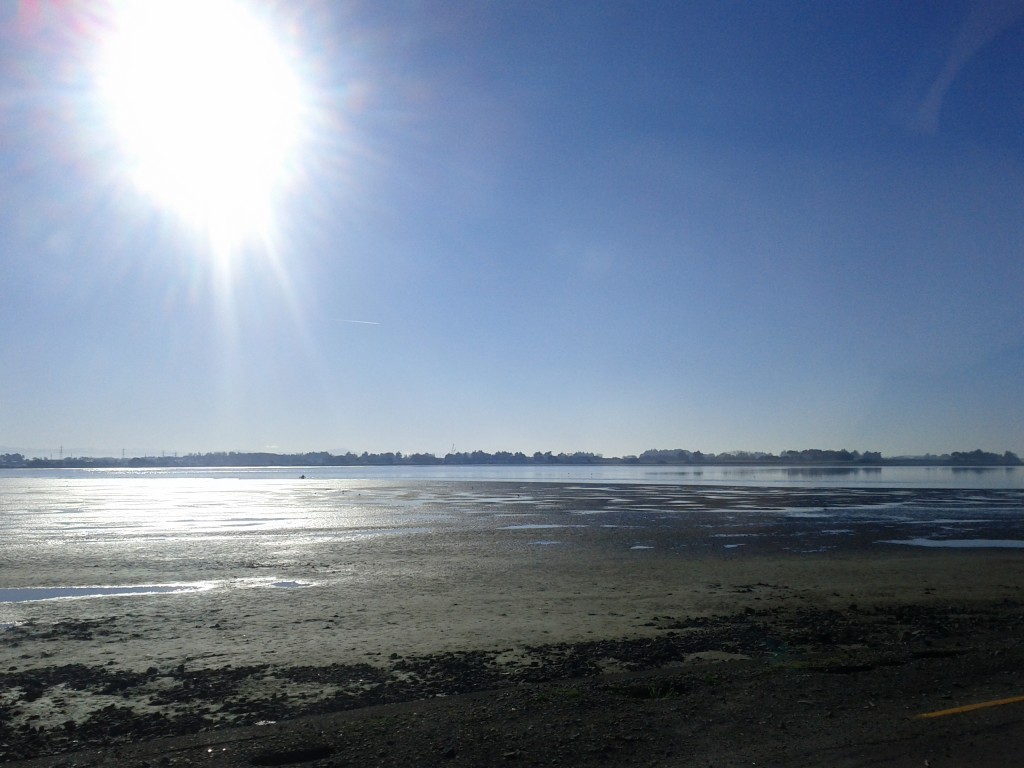 Shipping containers make a great wall to hold up the cliffs - assuming the top container doesn't fall on your car. ;-)

Along a number of sections, shipping containers have been used to hold back the cliff and to stop any falling rubble hitting cars. It appears that the locals have taken to doing art installations on the sides of them, we say a number of walls like the above covered with giant paintings. 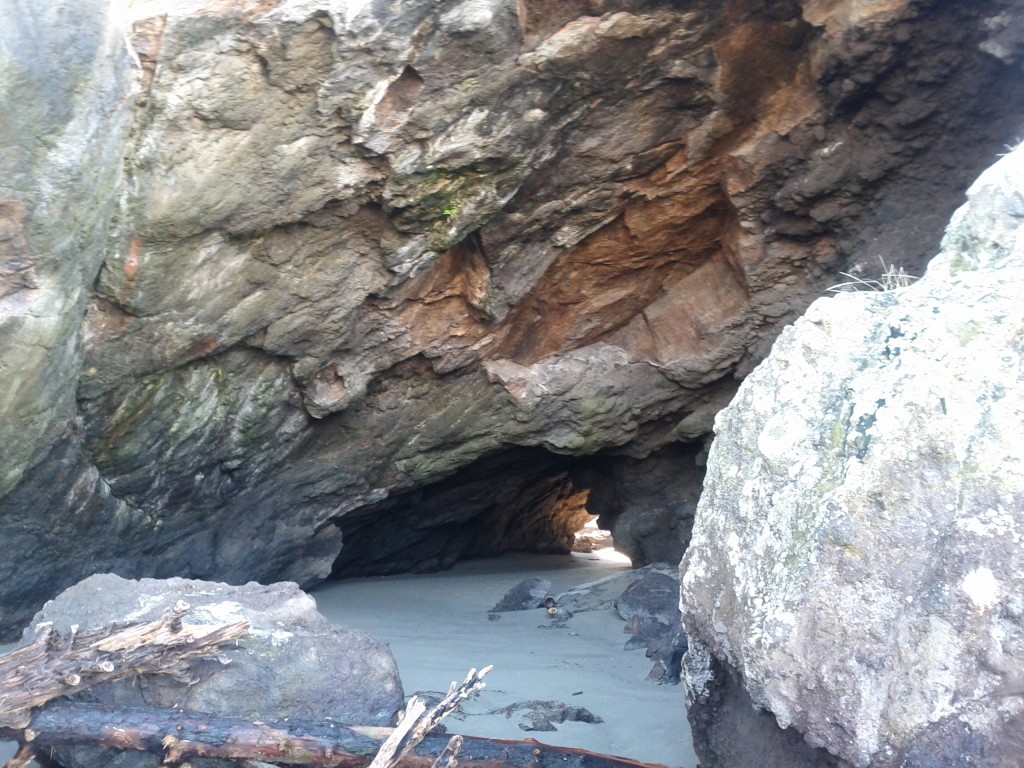 Cave in Sumner (can a cave have two open ends? Or is it some kind of funky tunnel?) 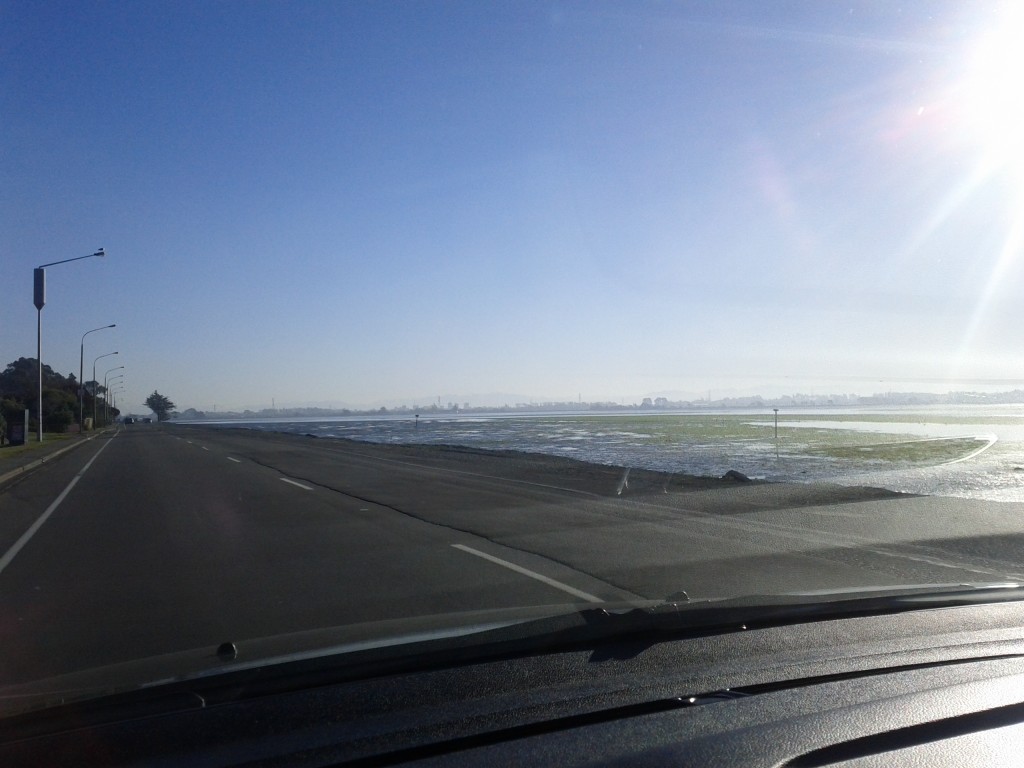 Fishing pier in New Brighton... seems kind of pointless, but the locals appear to enjoy it. Brighton is the first suburb (other than the CBD of course) where I really started noticing clear sights of residential buildings having suffered heavily in the quakes –  numerous buildings were badly damaged, not to mention the roads and foot paths. 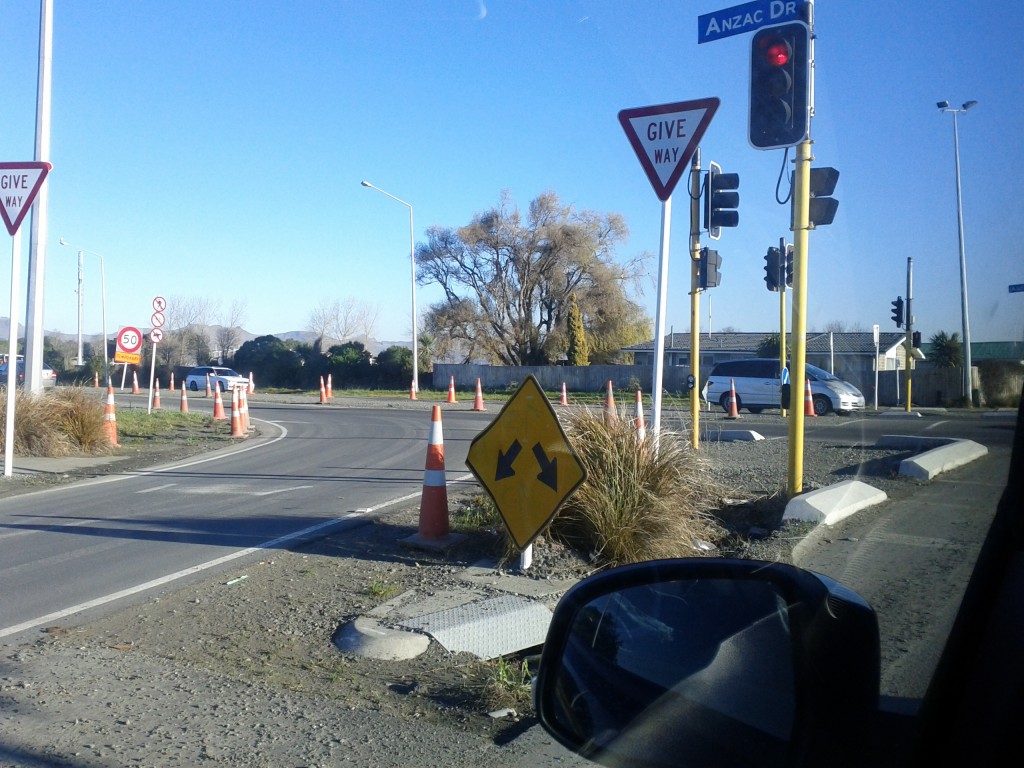 What happened to this traffic island? :-/

Heading back into Christchurch in the afternoon, we passed yet another demolished church – whilst churches are by no means the only victims of the quake, there’s very few that haven’t suffered a lot of damage from what I’ve seen, and their distinctive construction styles make for some interesting photo shoots. 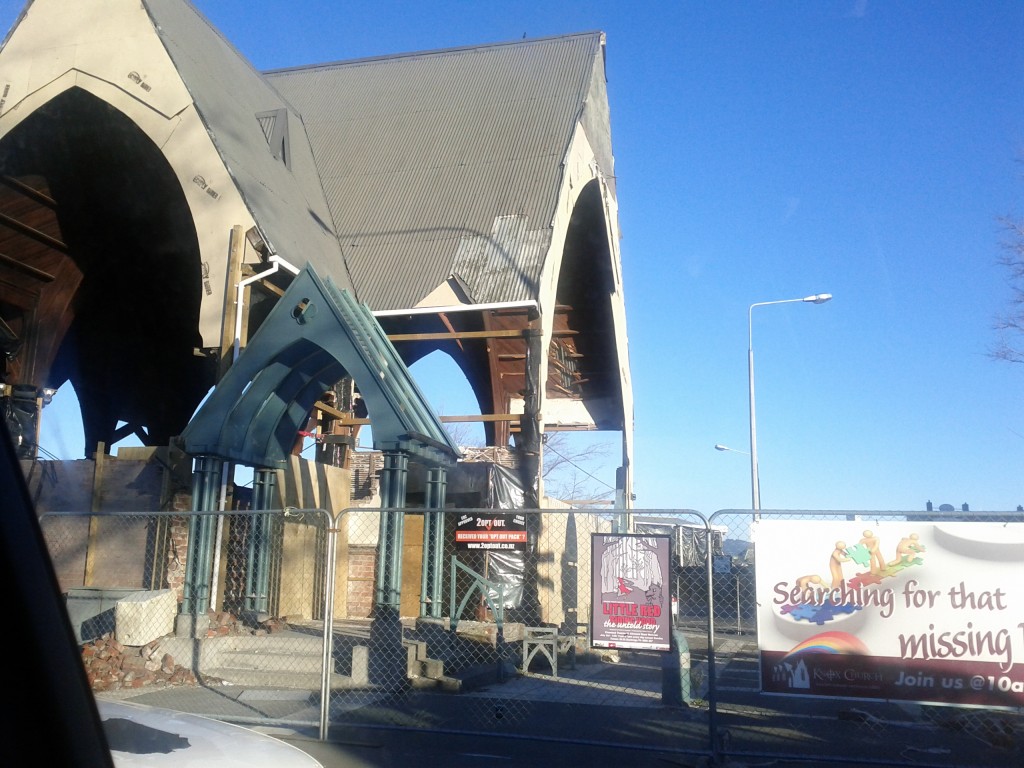 We ended up having dinner with some of Lisa’s friends by getting some pizza from Spagalimis in Riccarton and then heading out to the airport. One thing I did notice lots in Christchurch are the numerous hacky heating solutions for bathrooms – a number of houses tend to have small fan heaters bolted to the wall, with the power feed wired into a switch on the wall – I guess it gets cold in the winter…. 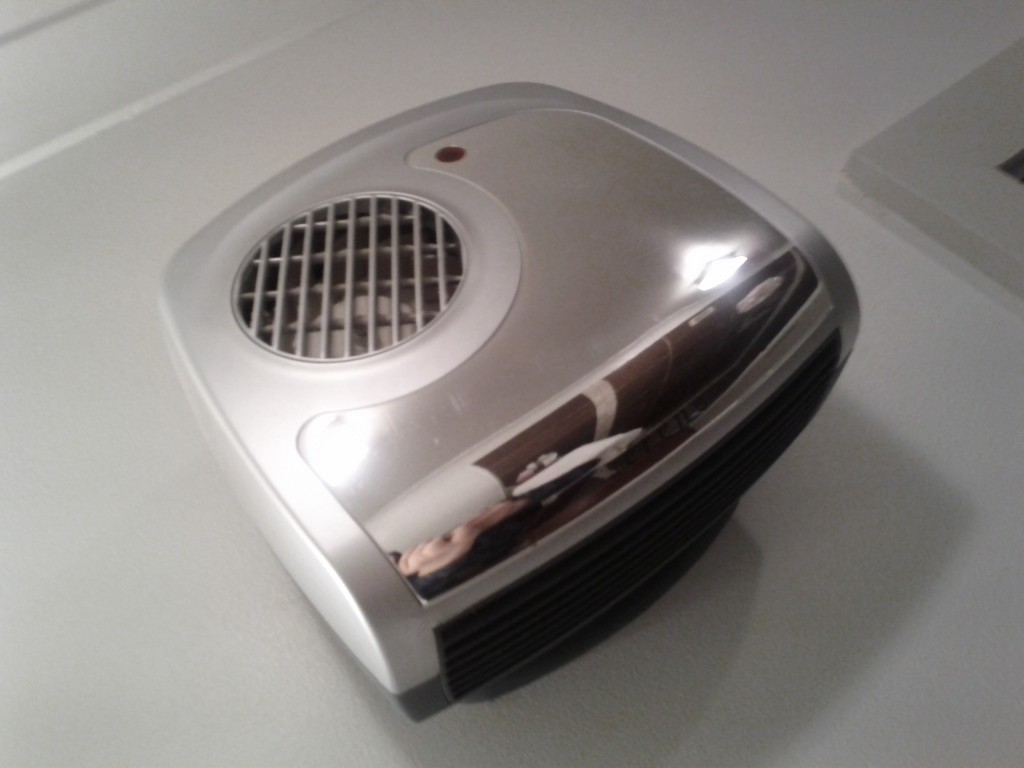 Returning the rental car was interesting, we pulled into a parking space and a guy in a high viability vest approached offering to take our key – to which I gave him an education about social engineering and how could I validate the identity of some random guy approaching me in the carpark?

If you want a brand new car, I highly recommend going and hanging around the rental car lot in the evening when hurried travelers are pulling in to park, wearing a high visibility vest and offering to take their keys for them.

Lisa thinks I’m a nut, and sure I agree, the probability of such an occurrence in NZ is low, but it doesn’t mean it can’t happen…

Overall it was a good trip to Christchurch – not sure I’d live there at this stage, I do love my cities and with the main CBD being down, I think I might get a little bored –  but that being said, it’s got a nice cold climate and isn’t Auckland, which gives it some pretty high points. ;-)

This entry was posted in Uncategorized and tagged christchurch, coffee, lyttelton, roadtrip, travel. Bookmark the permalink.