I decide to take a visit to Sydney for a weekend earlier this month and haven’t had a chance to get around to putting up the information just yet – so here’s my overdue blog post so that people stop nagging me about it ;-)

In 2011 so far I’ve been to Brisbane and Melbourne, so I wanted to add Sydney to the list of cities I’ve visited – part of me is still toying with a change of scenery and AU would certainly offer that, along with better weather.

First up, I flew in on Friday evening and meet up with my exploring buddy @chrisjrn who also decided that a lone New Zealander would threaten the people of Sydney too much, so came along to keep me under control.

We took the airport train in to the CBD, which is pretty fast and cost effective at around $15 per person, although the trains could do with a bit of cleaning and de-gettoing. :-/

After dumping bags at our dodgy Park Regis hotel, we started off having dinner at the City Extra restaurant down at Circular Quay – the food was mediocre, but the fact it’s 24×7 and right at the waterfront is pretty awesome. 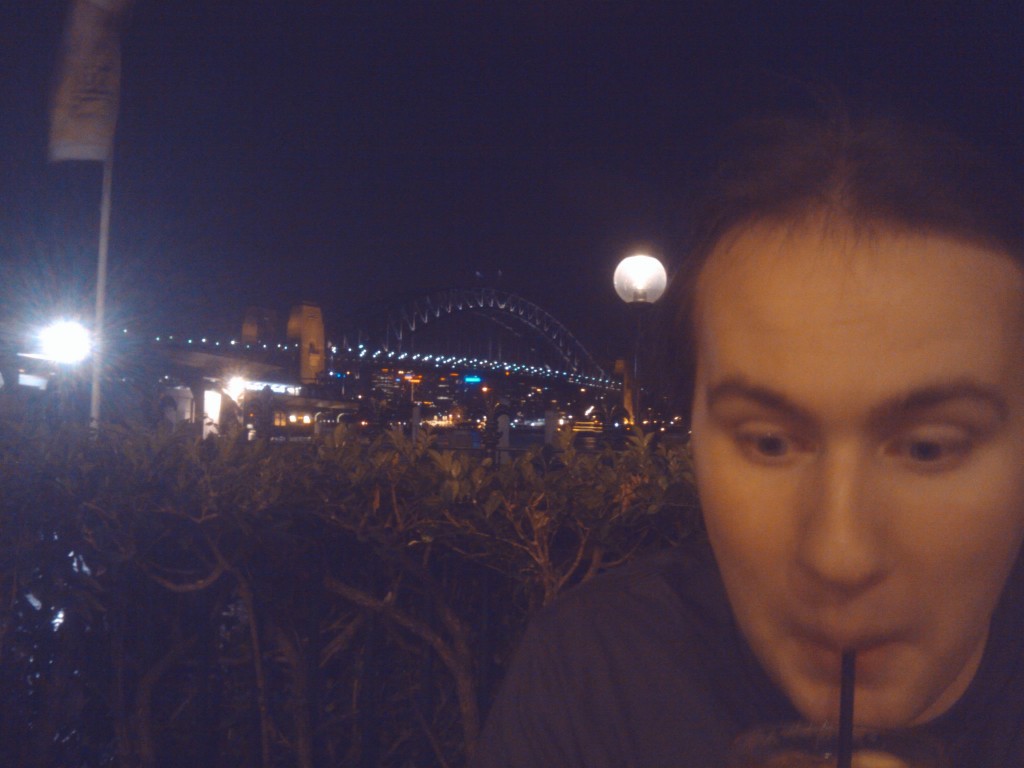 Here's a dodgy looking @chrisjrn with the Sydney Harbor Bridge in the background.

One thing that I always find different about AU, is the cultural practice of paying for dining at the end of the meal, rather than upfront like we do at a lot of New Zealand cafes – it’s handy in that you can easily order more drinks/snacks, but it also means you can’t just get up and go afterwards like you do in NZ.

The first proper day of exploring was Saturday morning – after waking up and leaving our hotel, we headed out for a coffee from some random in-the-wall place followed by a walk down to Circular Quay to attend the well known “Pancakes on the Rocks” resturant. 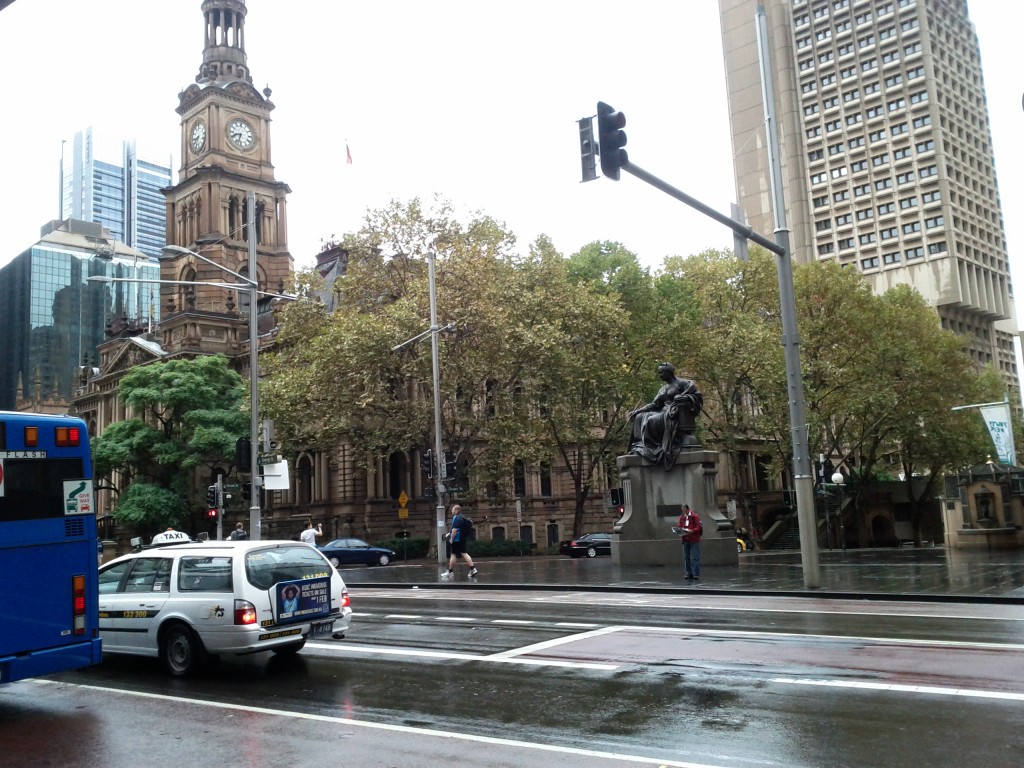 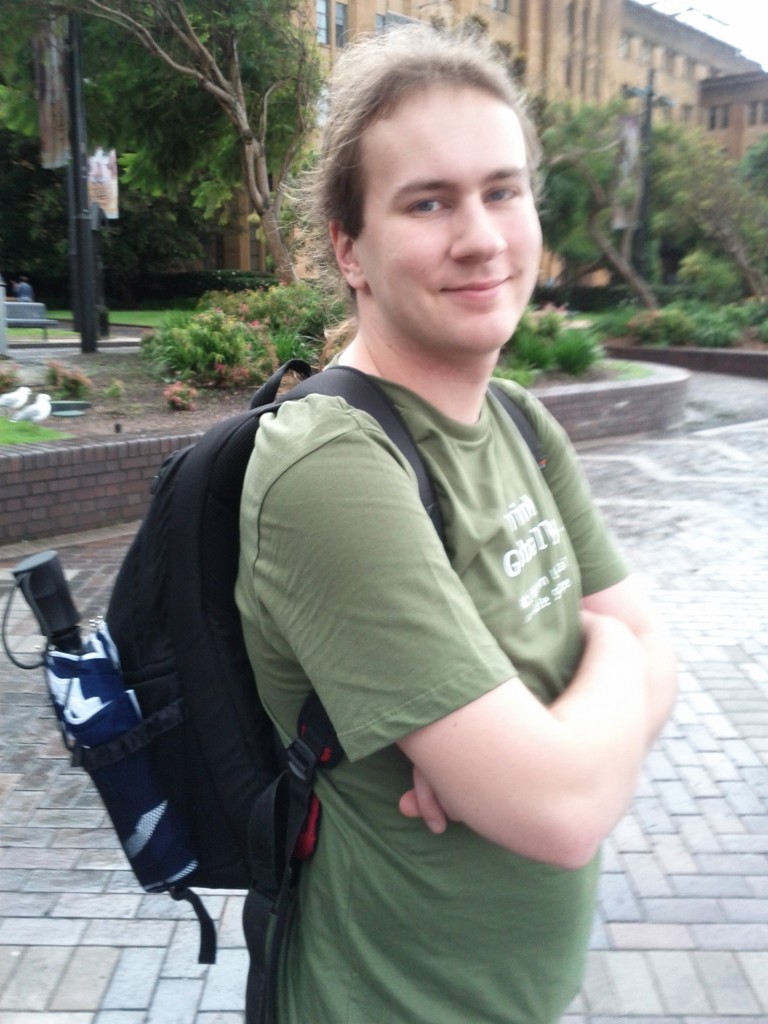 Oh no, an Australian! 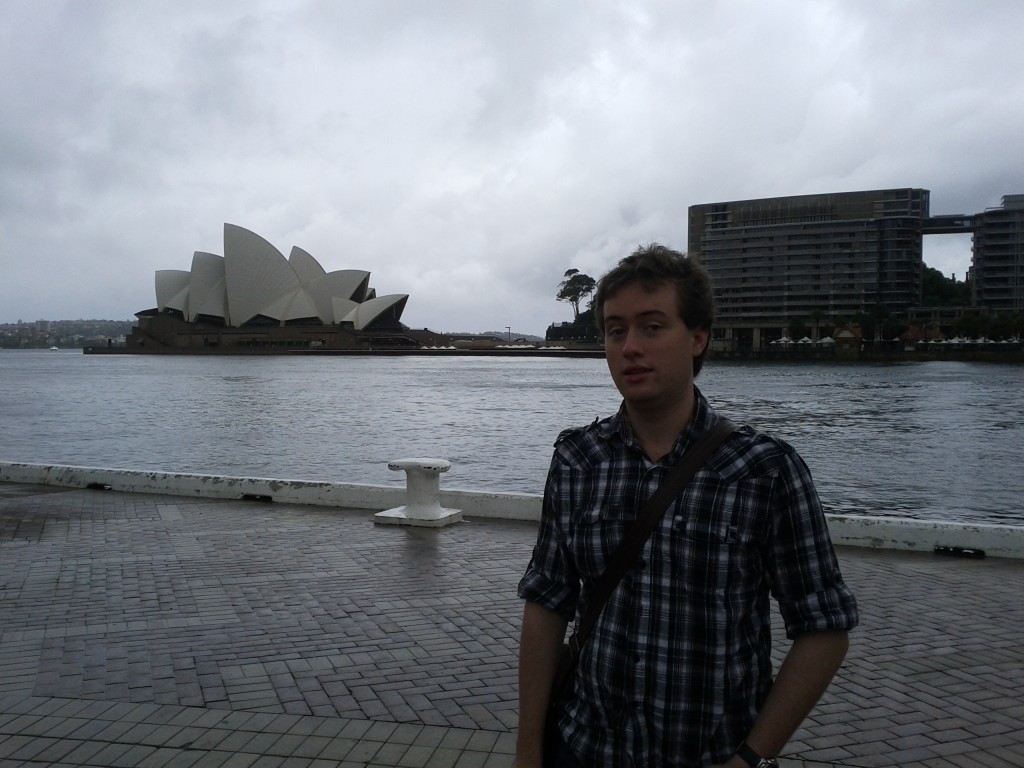 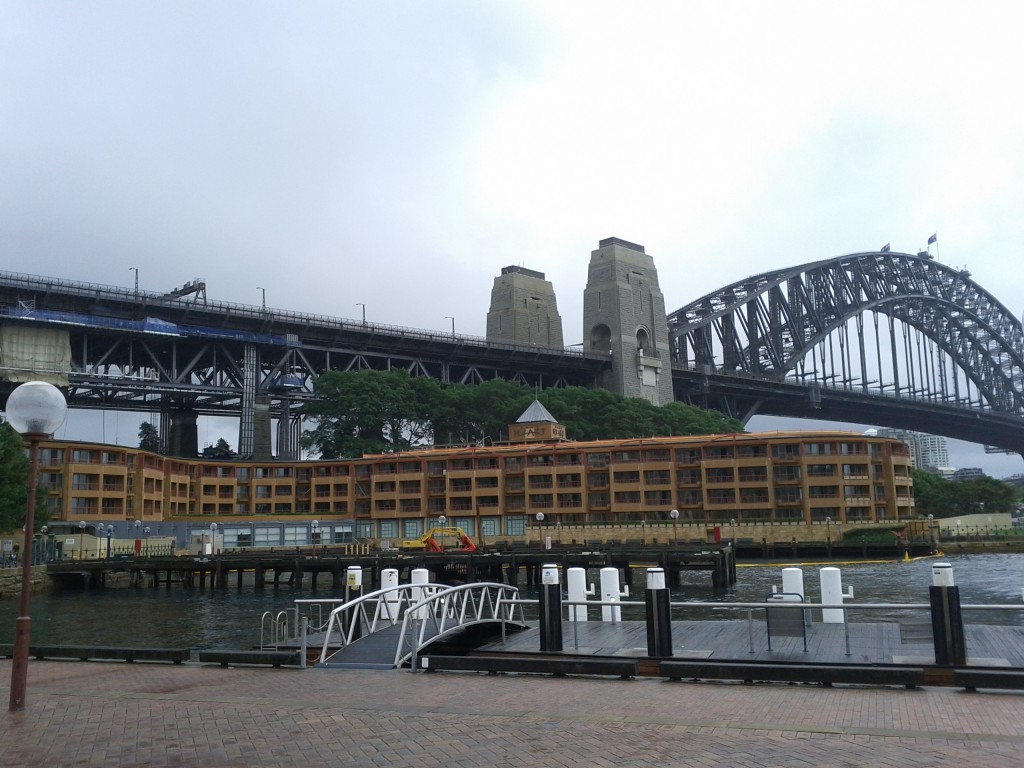 Pancakes on the Rocks was quite amazing – they have a huge menu of different style pancakes with big servings and topping options. 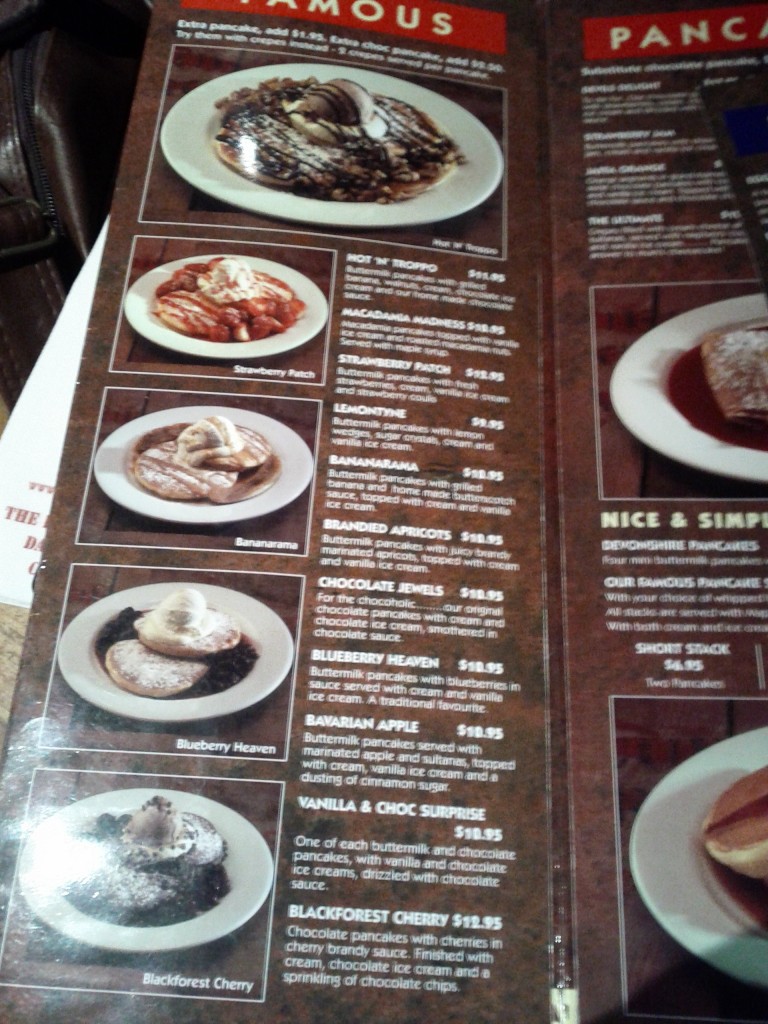 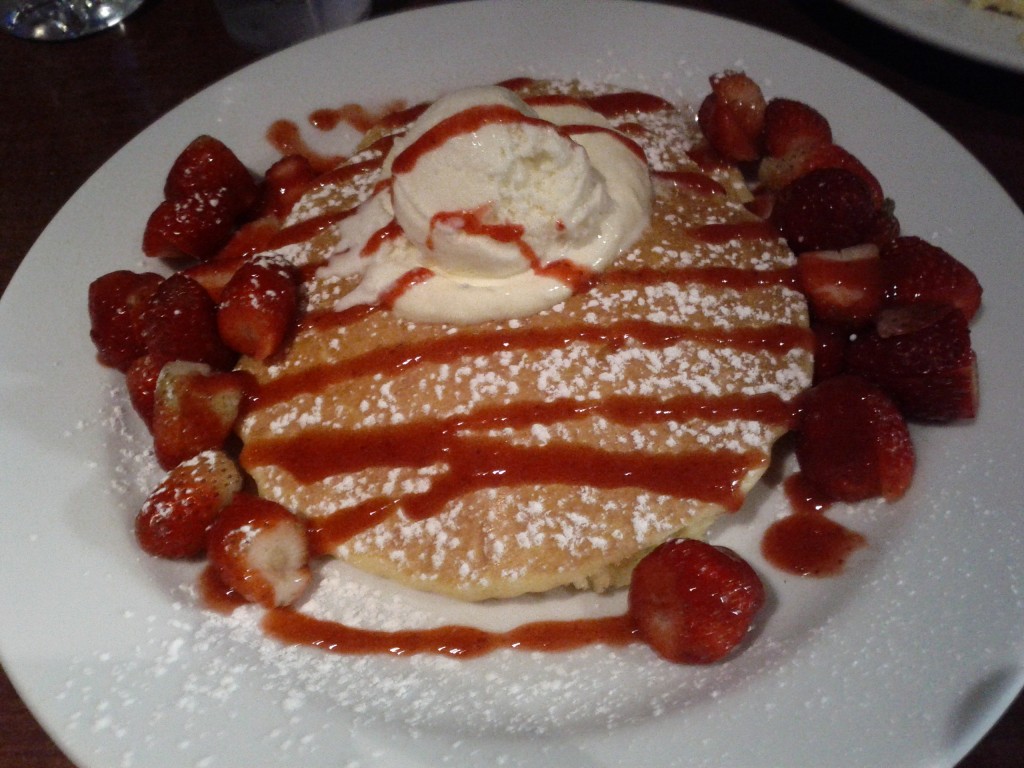 I have to comment on the pricing, I found the meals pretty reasonable at most of the places I went to in Sydney – whilst many of the places I visited were in tourist zones, I found the prices I was paying to be around the same as Wellington NZ (excluding the currency conversion), which reminds me that I think Wellington is getting a bit pricey for what it is lately….

After pancakes, we took one of the ferries across the harbor to Manly – sadly I don’t have any good pictures of the larger ferry I was on, but I did get some of the smaller ones. Sydney harbor is much larger than you initially think, and there’s also a section of military harbor space you can see from the boat.

Saturday spend most of the day raining, so we took a bus trip back from Manly to a station, then the train over the Sydney harbor bridge, to see the city without getting soaked wet.

I noticed that you can actually walk or cycle the bridge on regular pathways or even pay for a tour to climb up to the top of the bridge, which would be pretty good fun – if I have time, I’ll consider doing it on a future trip. :-)

Upon the return to Sydney, we visited the Apple store – whilst being a firm anti-Apple, pro-OSS, Android-loving fanboy, it was well worth the visit – Apple truly understands how to make a unique retail experience. The flagship Apple store in Sydney

About 1/3 of the store floor space is a huge perspex staircase – something that would be unheard of in any other retail environment, but for Apple, this creates an impressive sense of awe at the store.

The shop was packed when we visited, with crowds gathering around tables playing with ipads whilst an Apple employee walked users through an ipad tutorial.

I think the staff really help make it work – whilst there several approached us to ask if they could show us any cool technology or help us in anyway, despite the store being flat out busy – something which would lead to you being ignored in a conventional retail store like DSE.

They also seem to actually know their stuff – something MagnumMac/Yoobee should learn – their staff are so hopeless I had to explain what OS X Leopard was once…. :-/

Like any yuppies, after visiting the Apple store, we headed off in search of fancy coffee – which we found thanks to @chrisjrn’s old uni haunt where we had the opportunity to have some siphon coffee. There’s a good write up on how it works and how to make it here, regardless whether you are a fan or not, it’s quite impressive: 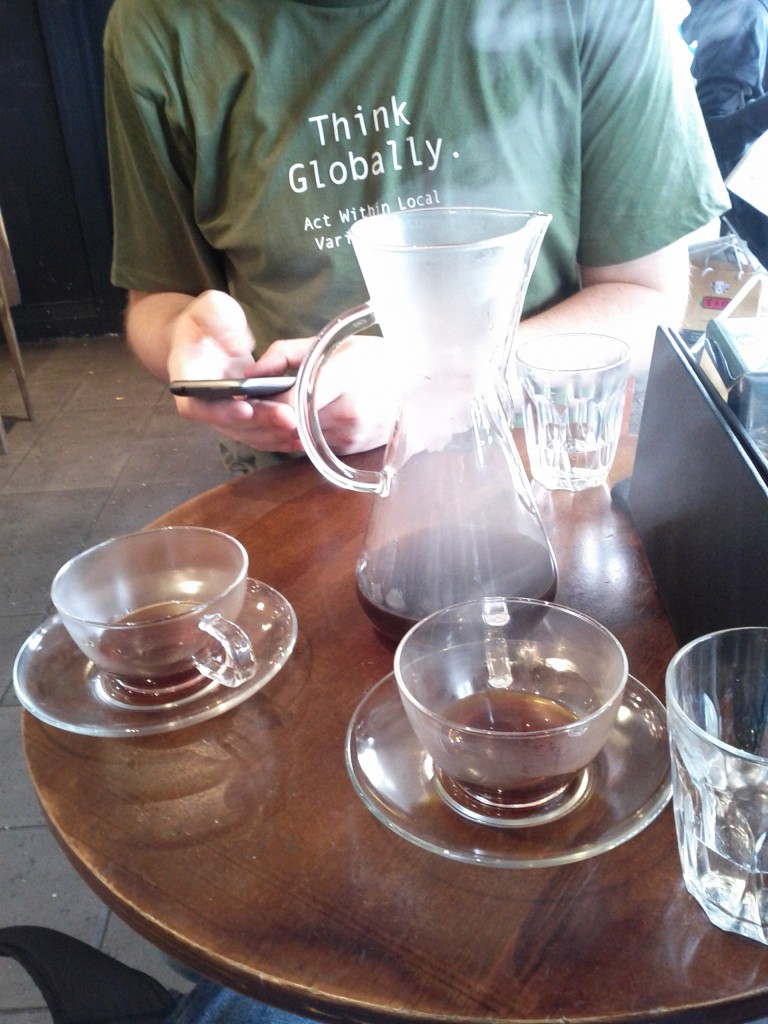 Anything served in a steaming beaker is epic.

The coffee produced is very light, yet has a strong flavor of the beans, without being too bitter – it clearly wasn’t a common order, since the coffee guy then made us some other filter coffee varieties as tasters to please us coffee snobs.

After coffee, we wandered back through town, the chinatown area and then spent the afternoon/evening relaxing at the hotel and had dinner at some dodgy Irish pub.

The rain finally subsided a bit on Sunday, so we were able to do more of the walking around the city that we had planned. 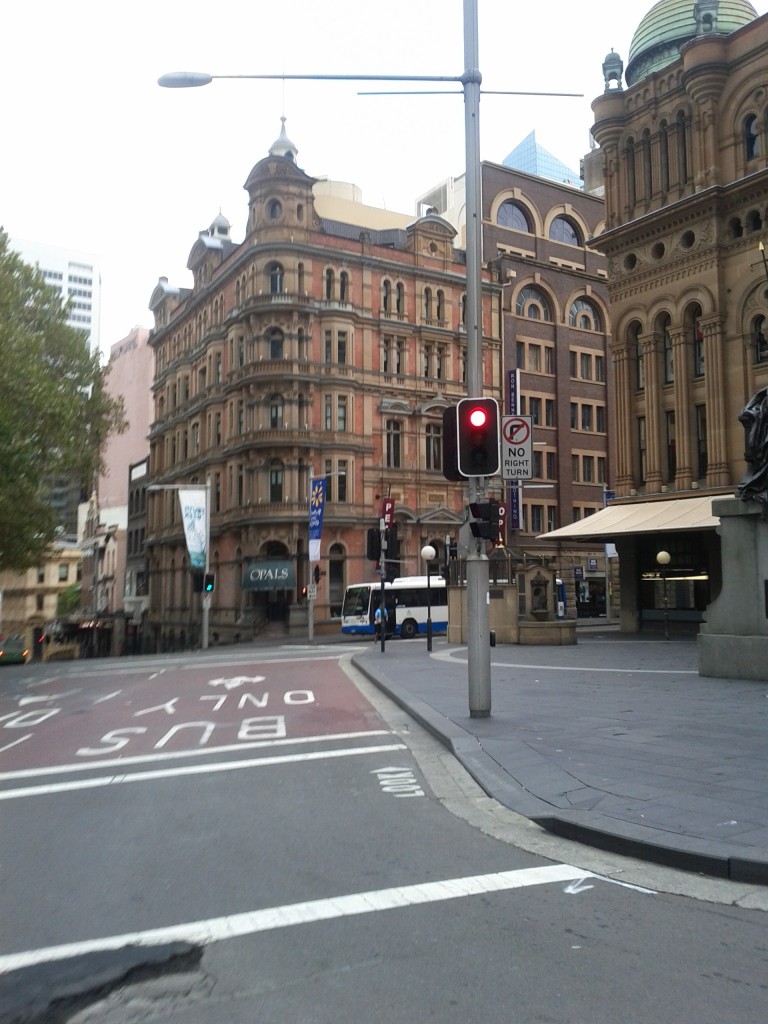 Sydney has a few older buildings, although nothing like the volume that Melbourne has.

I also had the delightful opportunity to meet fellow New Zealander @tanya for the first time and ended up dragging her along for breakfast at the coffee shop, where I proceeded to eat lots of her scrambled eggs after demolishing mine. 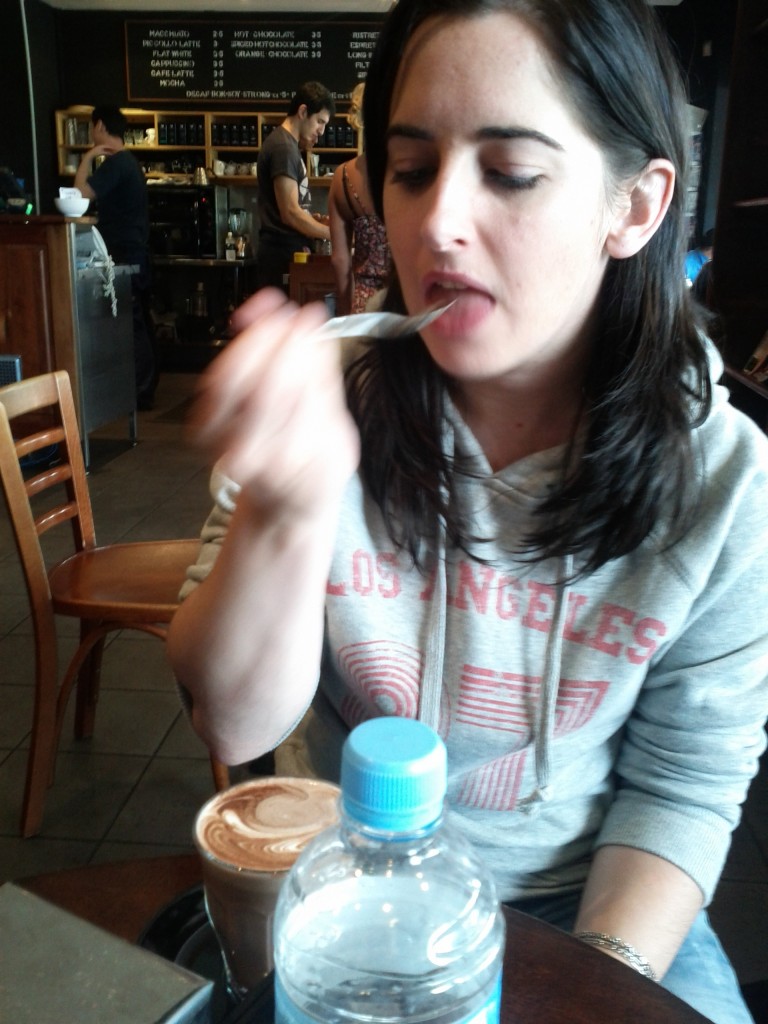 After coffee, we wandered back into the CBD, headed to the harbor and ended up taking the monorail around the city. Twice. Because monorails are just that awesome. Sydney, viewed from a MONORAIL :-D @tanya looking fierce on a MONORAIL Me experimenting with the new front camera feature of my Nexus S.... whilst on a MONORAIL! :-D

After the interesting trip around the city, we said goodbye to @tanya who clearly decided that there were more exciting things to do than spending the afternoon with debating geeks.

@chrisjrn and I wandered along the waterfront around to Circular Quay, a variety of pics from that wander: Like the software, the company also consumes an entire core for itself. (curse you Symantec antivirus!) Dodgy backstreets of Sydney. And a finger. More waterfront. Note the oddly located ugly white tower on the left, clearly before they had good building bylaws. Re-developed commercial wharves that are now restaurants and pubs. Some random bridge. No idea what. ;-) No shortage of steel there....

Finally after wandering around for the day, we had coffee with twitter friends @notsarahnz and @felidofractals before heading back to the hotel to collect bags before heading to the station and then the airport. Tube Train! (Well not quite.... but it is underground!)

Overall, I really enjoyed the visit – not sure if Sydney is somewhere I would live long term (too much sprawl – I’d prefer Melbourne or maybe Brisbane), but it’s certainly a nice/interesting place to visit for a weekend get away.

This entry was posted in Uncategorized and tagged opinions, travel. Bookmark the permalink.