I’ve spent my first day in Christchurch catching up with Lisa’s friends and family, but also went for a short walk from Riccarton, through Hagley park and into what remains of the CBD.

The flight down was all smooth, great view of the southern alps, hopefully on the way back it will be a bit less cloudy so I can get a better view. Christchurch airport has been through a lot of renovations – it’s still ongoing, but it’s very nice, possibly the nicest domestic airports in New Zealand. 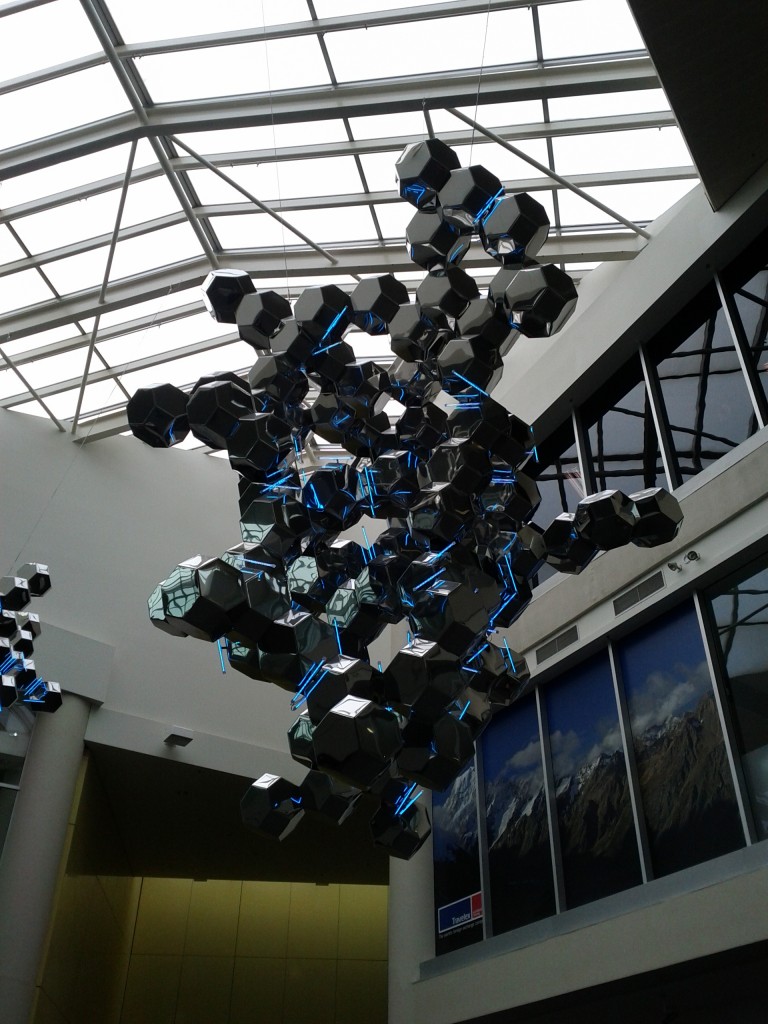 Loving the chill weather down here, it’s about 4 degrees and a lovely fresh chill breeze – as a Wellingtonian who’s been suffering muggy Auckland weather for the past 11 months, it’s absolutely blissful – especially when walking as you don’t get too hot.

Only downside is that you definitely notice the dampness down here in winter, Hagley park was very chill, dark, damp and muddy – kind of like the stereotypical cold harsh park you’d find in a murder movie. :-/

There aren’t many signs of the earthquake damage in Riccarton, but as I walked into the CBD a few more signs of it started appearing – temporary offices that have popped up in prefab modules, the odd empty lot and corner stores holding up their awnings with wooden frames. 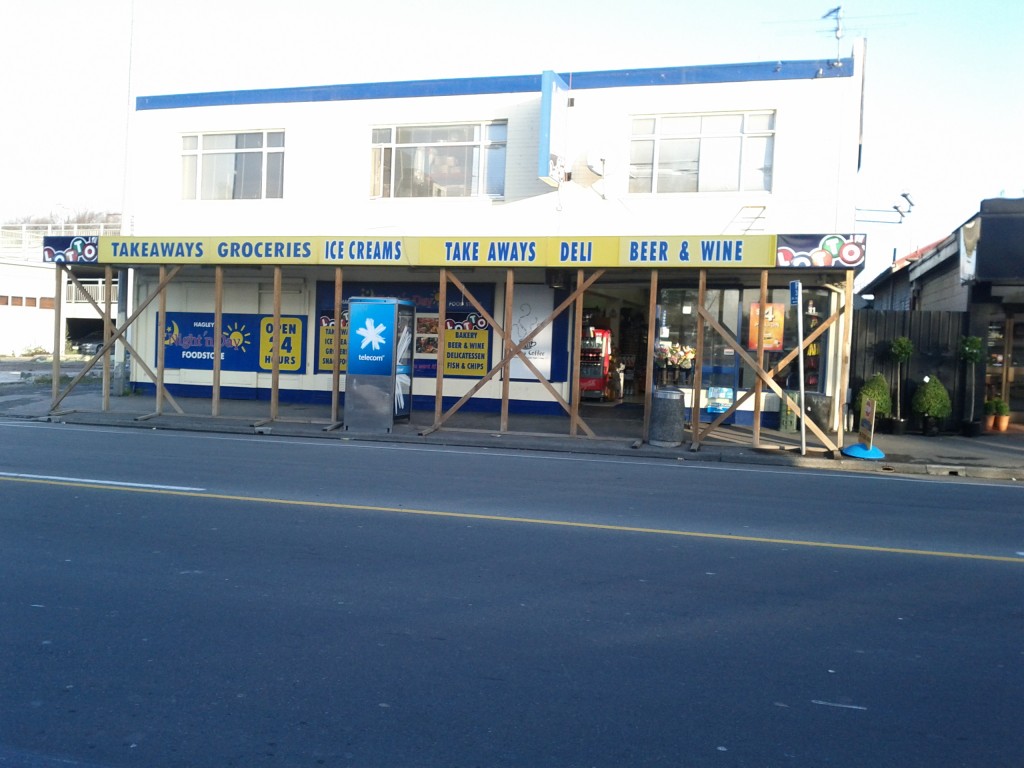 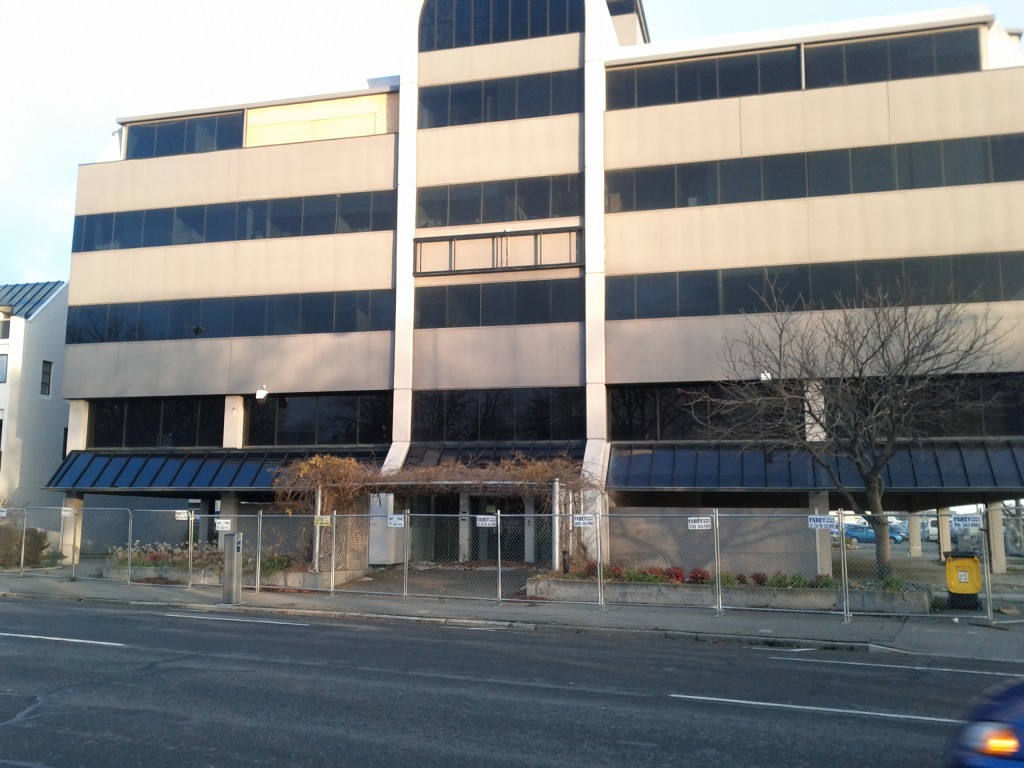 A number of buildings like this are around the city - look structurally OK from the outside, but cordoned off and abandoned. 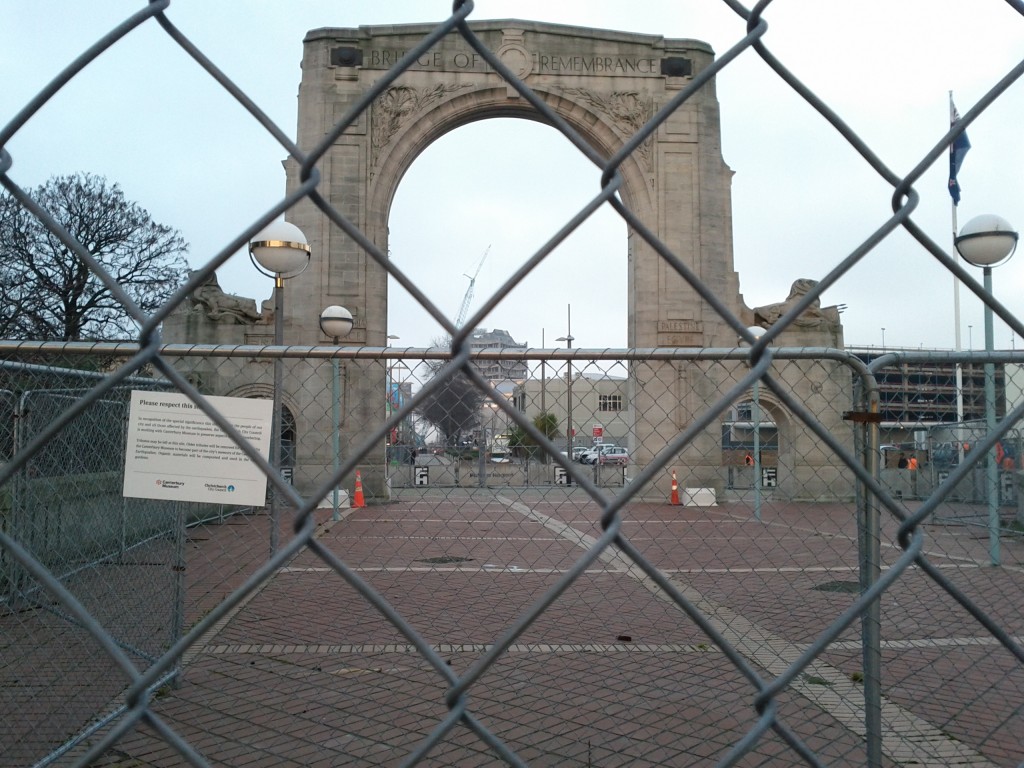 The bridge of remembrance - looks like it's survived OK, but cordoned off. As I started getting into the proper CBD, it’s amazing to see how almost all the visible tower blocks have cranes attacking away at them, pulling them down.

Not sure why NZ uses cranes and diggers so much, vs explosives, but I presume there’s some cost or safety reasoning behind it – or maybe for better material recycling? 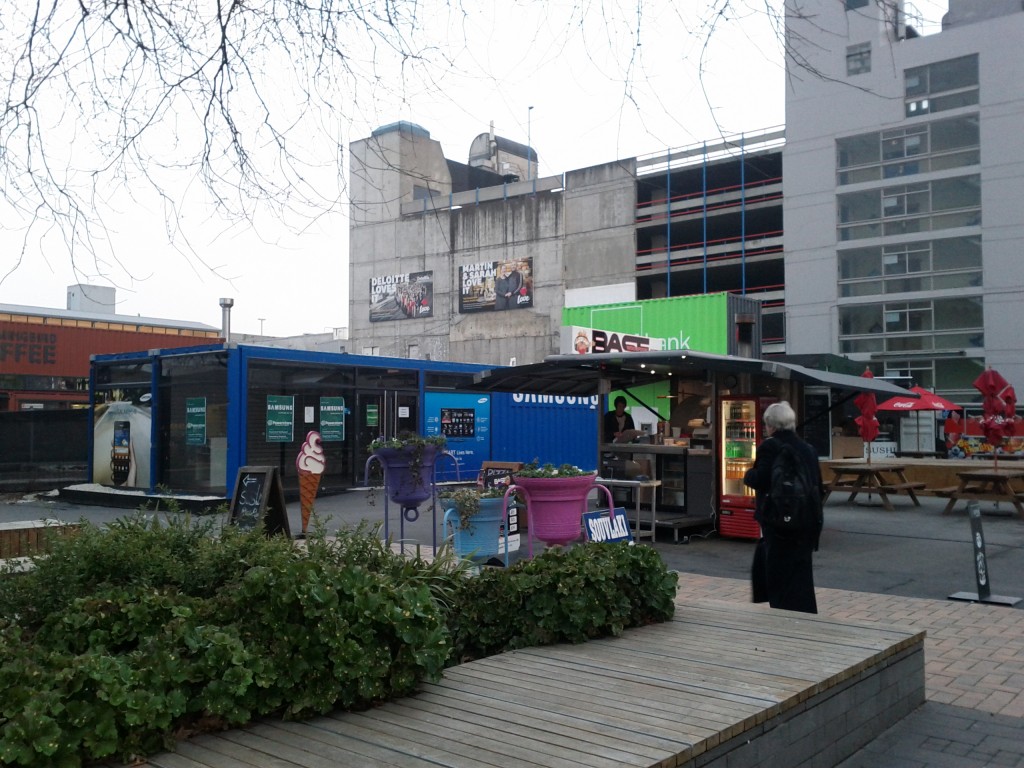 The container mall is really cute, lots of neat colours, layouts and designs. 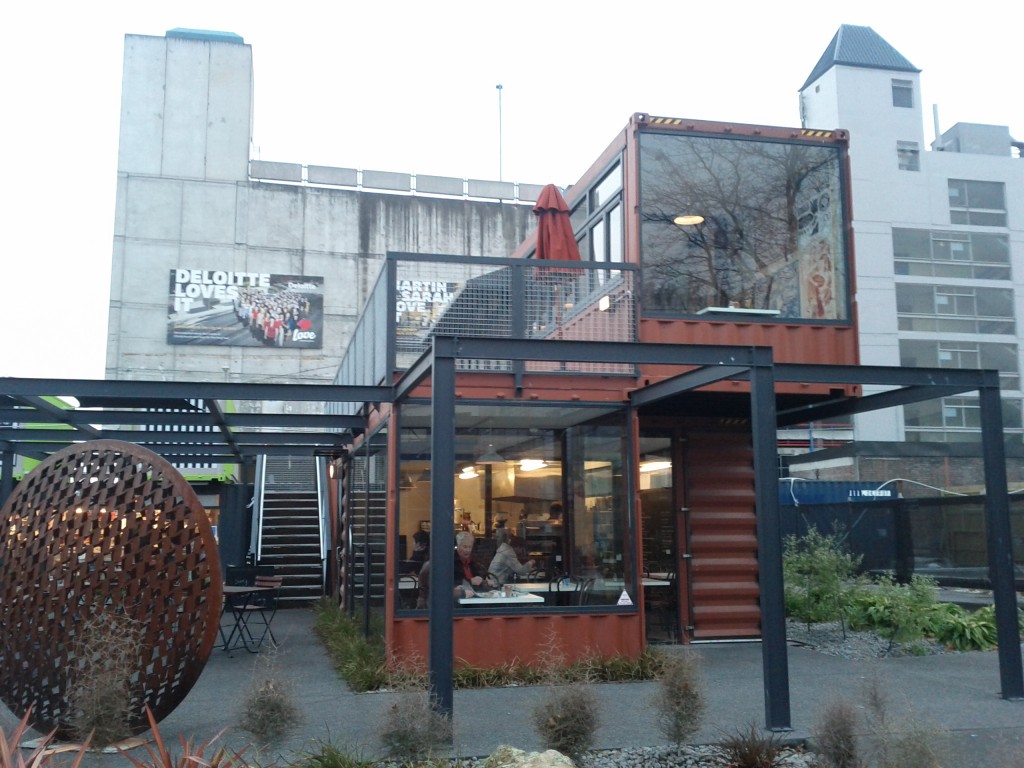 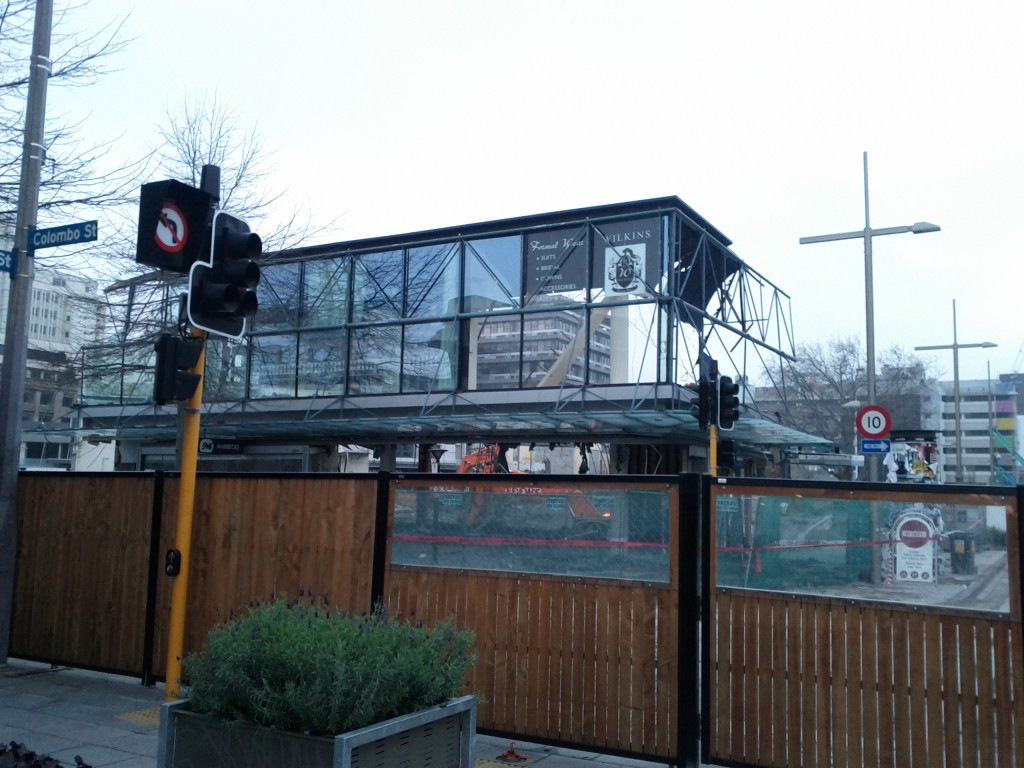 Where did the rest of that building go? O_o

Once in the CBD, you start to realise how much of the city’s core has been taken out of service, it would be like closing all of Lambton Quay and the Terrace in Wellington as well as pockets of Cuba St and Courtney Place.

The deconstruction is still ongoing, when I left the area at 17:30 with the sun fading there were still diggers working away in the background, although not as many as I would have expected.

In many ways I’m surprised that there was so little visible demolition presence – there were the odd person and sign guarding off-limit areas and contractors coming and going, but I was expecting to see hordes of diggers and cranes pulling stuff down.

I guess the methods used tend not to showcase swarms of workers – I don’t think it’s a case of them not working quickly, since I can see the huge amount of the city that’s been cleared, something which would not have been an easy feat. 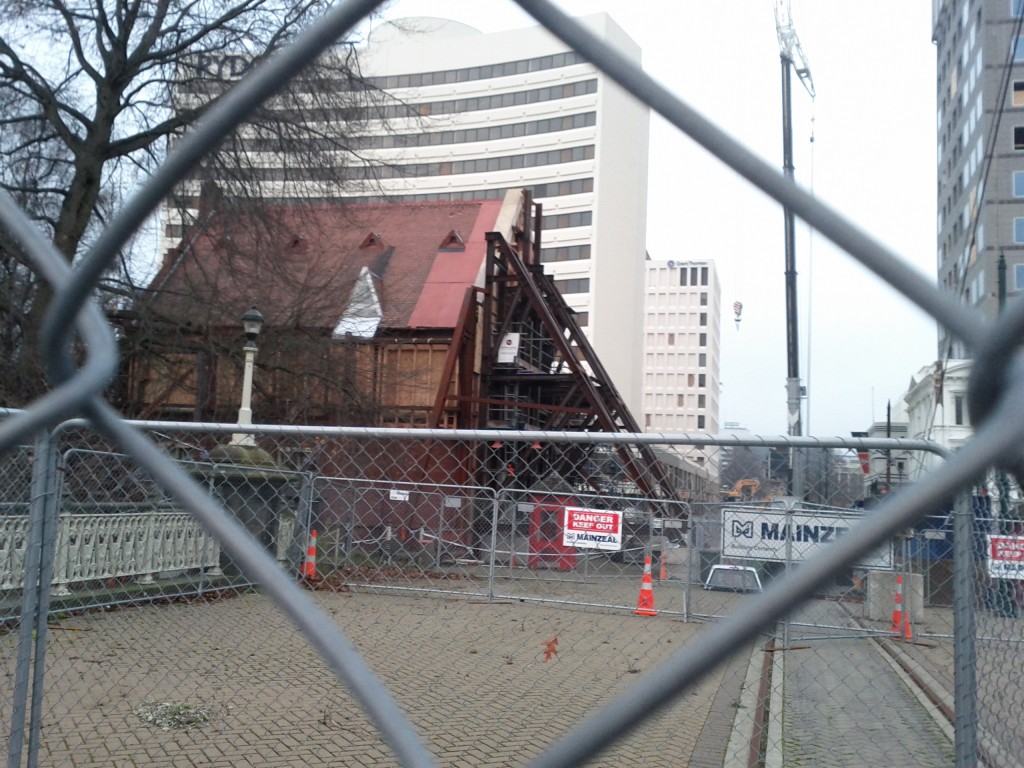 Anything in brick got totally fucked - I guess there's a reason why there aren't many brick buildings in Wellington... 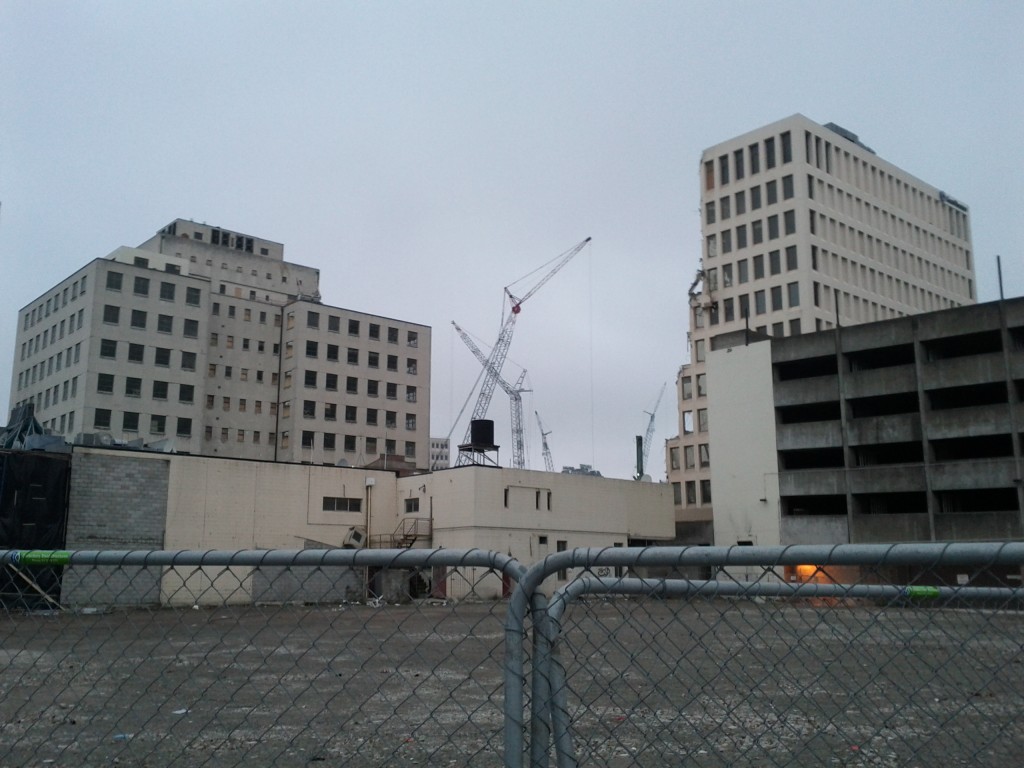 Look carefully at the building on the right.... or more accurately, the 10% that remains of it. 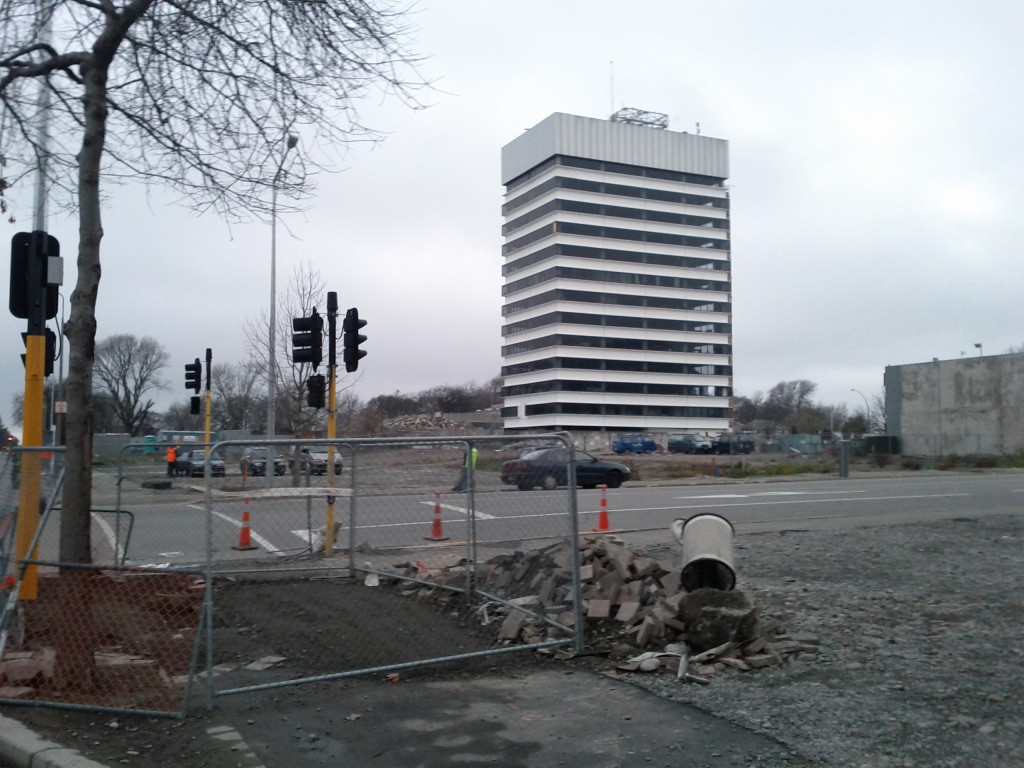 A lone tower block, surrounded by blocks of cleared rubble

Resembles more of an industrial wasteland than a CBD

There’s a huge amount of empty of space around the CBD – each of these spaces was once a building, it’s hard to comprehend how much has actually collapsed, since most of the rubble has been removed by now, some of the scale is lost.

The CBD has a kind of dystopian feel to it with all the missing buildings, odd piles of rubble and the random boy racer cruising through a deserted street in a low riding car with booming stereo and exhaust, whilst army soldiers stand guard. Another empty lot, another defacto carpark. Whilst still standing, there are a number of buildings still pending a demolition. After seeing how many brick buildings have collapsed and how badly, I can’t understand for any calls to save the cathedral or any of the other heritage buildings that came down – the earthquake shows that those materials are just too weak and dangerous for the geological conditions here in NZ.

Whilst it’s good to keep some amount of heritage buildings, the only way they’re going to be able to do it here is to build with modern materials and then replicate the look and feel of the heritage architecture, eg cladding a new church in the old one’s bricks, but not using it for load bearing walls.

At the end of the day, people come first – we shouldn’t keep old dangerous designs around just for heritage purposes, civilization is about constant evolution and improvement for the benefit of the living. 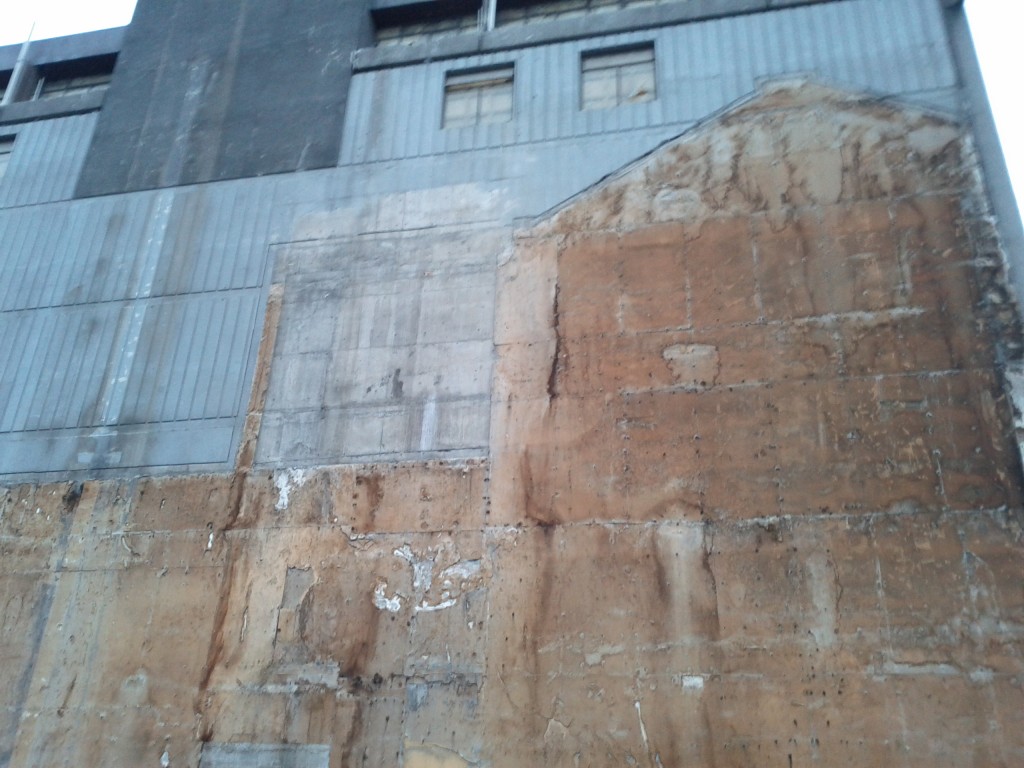 Some buildings are wrecked in some really weird ways - the demolition of the surrounding neighbors does offer a bit of a different view into the architecture of some of these older buildings, including weird additions. Most of the rubble lots have been cleared, the few that remain tend to have been compacted down

I’ll be getting more of a look around the city over the next few days, but it’s already pretty clear that Christchurch is going to have a massive amount of work cut out for it, to get the CBD back up and running.

This entry was posted in Uncategorized and tagged christchurch, damage, earthquake, riccarton, travel. Bookmark the permalink.