Early start today, Lisa’s family had made bookings for 08:15 (yes, the morning, wtf) at Drexels in Christchurch, so whilst I had to get up early, there was thankfully unlimited coffee and some pretty decent food as well. 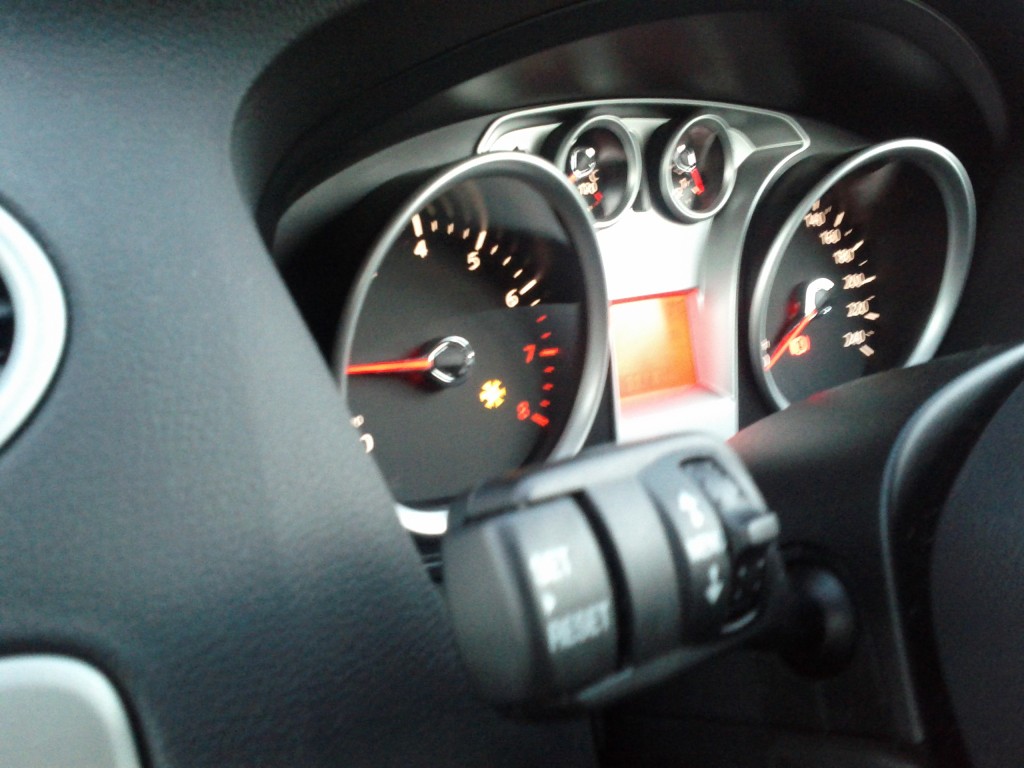 I'm unsure of the purpose of this symbol, but yes rental car, it is a bit cold. 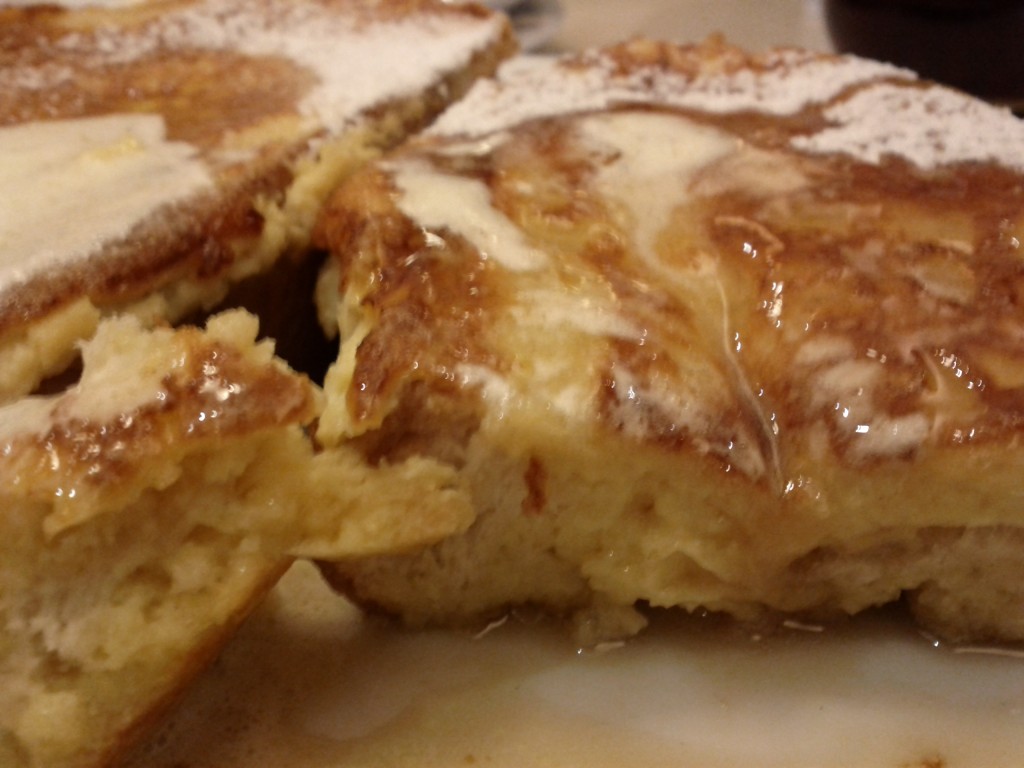 After breakfast I ended up going for a trip through Christchurch suburbs with Lisa and her friend, picking up stuff for the wedding, including a stop into the cheese mongers shop, selling both amazing cheeses, but also baking and other tasty snacks. 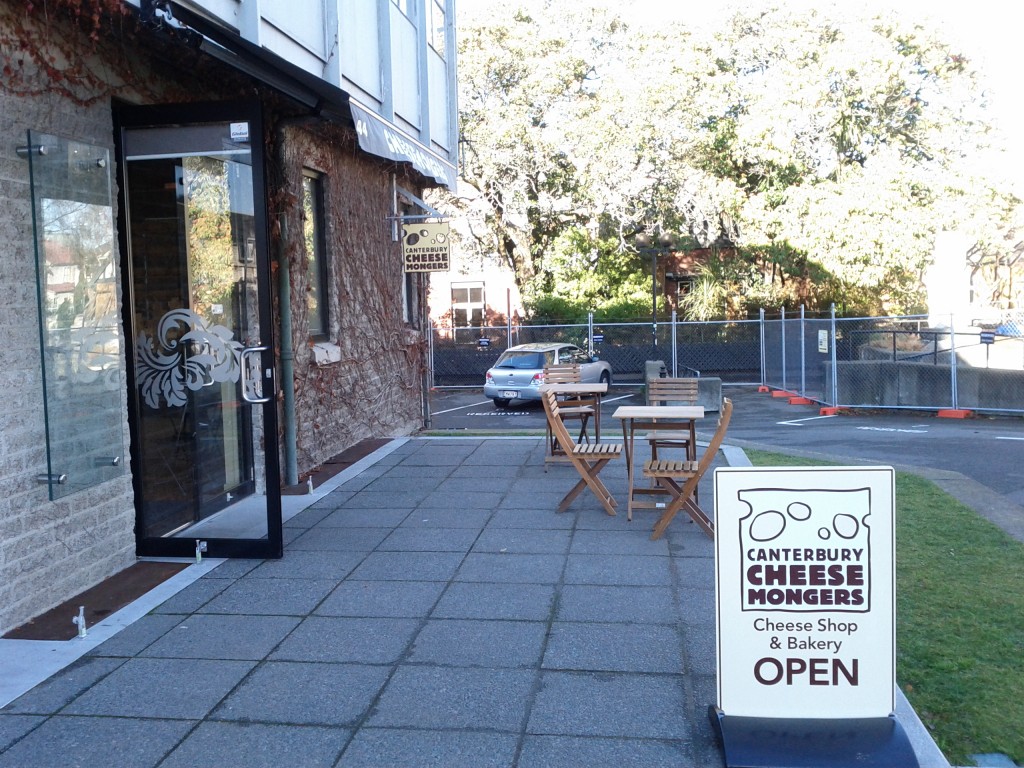 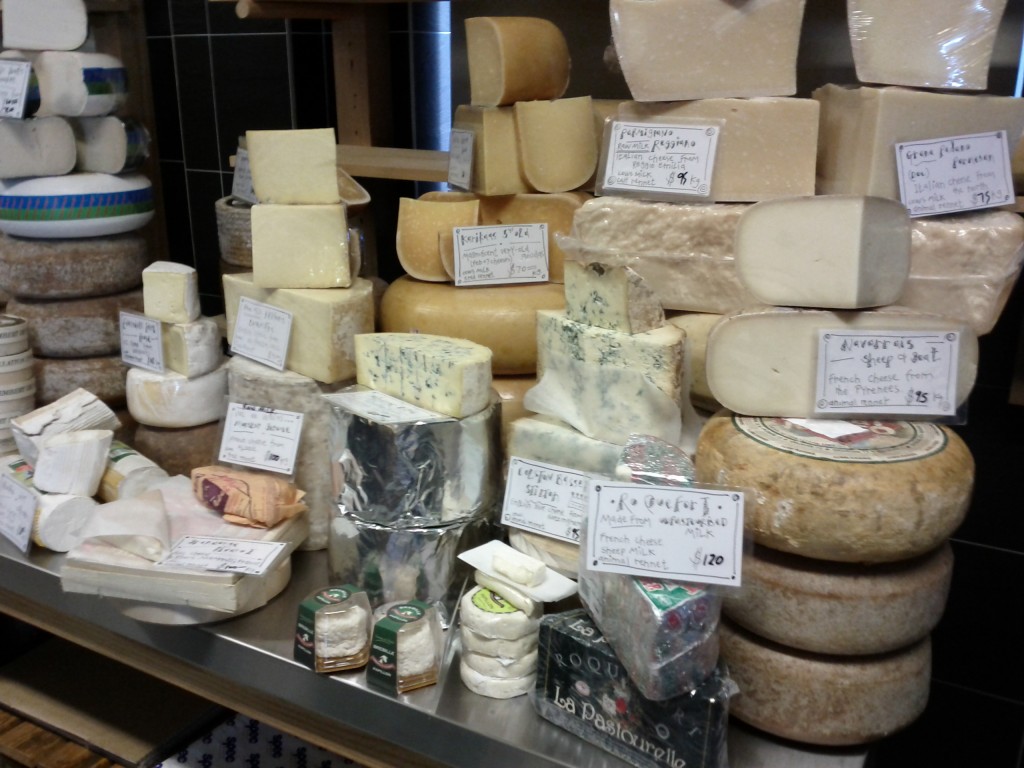 Following our tiki tour around Christchurch suburbs, we headed to the container mall for a mini tweetup with a bunch of Christchurch tweeple. 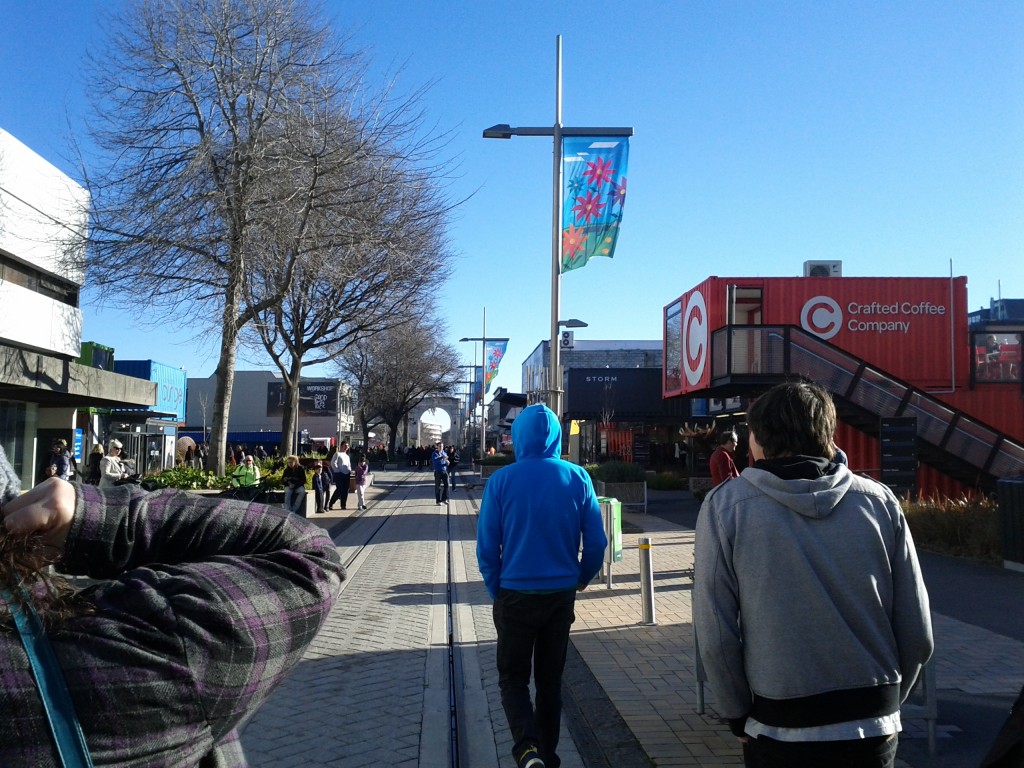 I really love the container mall, in many ways it would be nice to expand out into other empty lots to get more shops up and running. 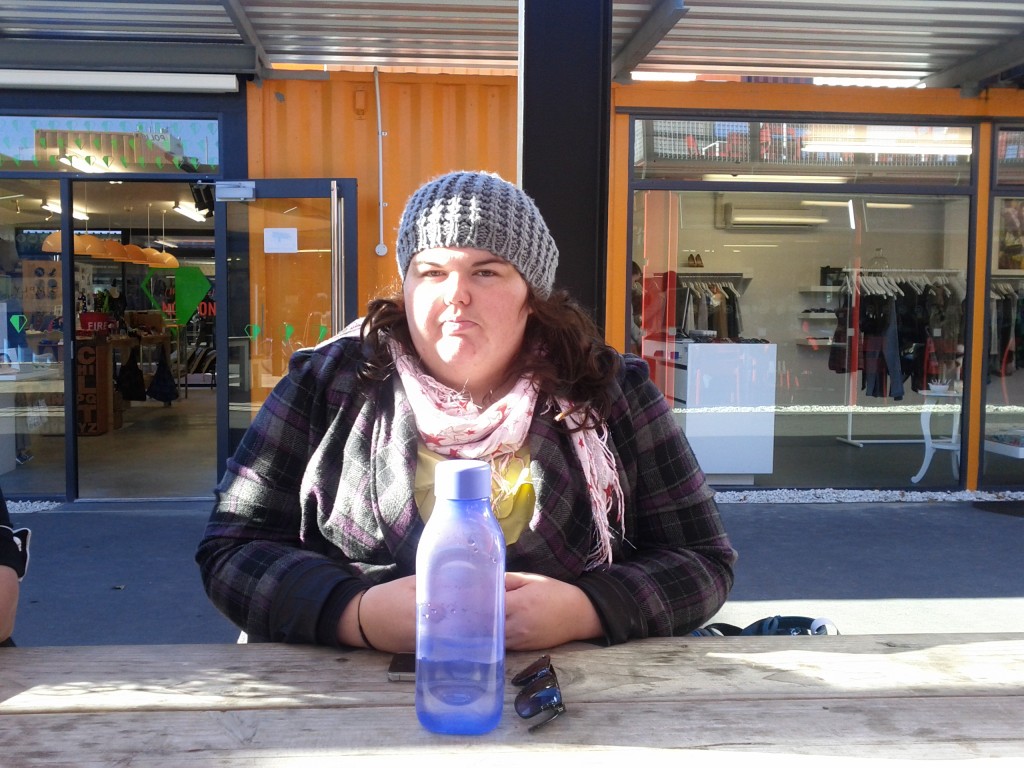 Afterwards, we went on another larger wander through and right around the red zone, checking out the extent of the damage – it’s actually a lot worse than I thought yesterday, not just a core of the CBD, but almost the entire thing is being demolished or is already just a rough, empty lot. 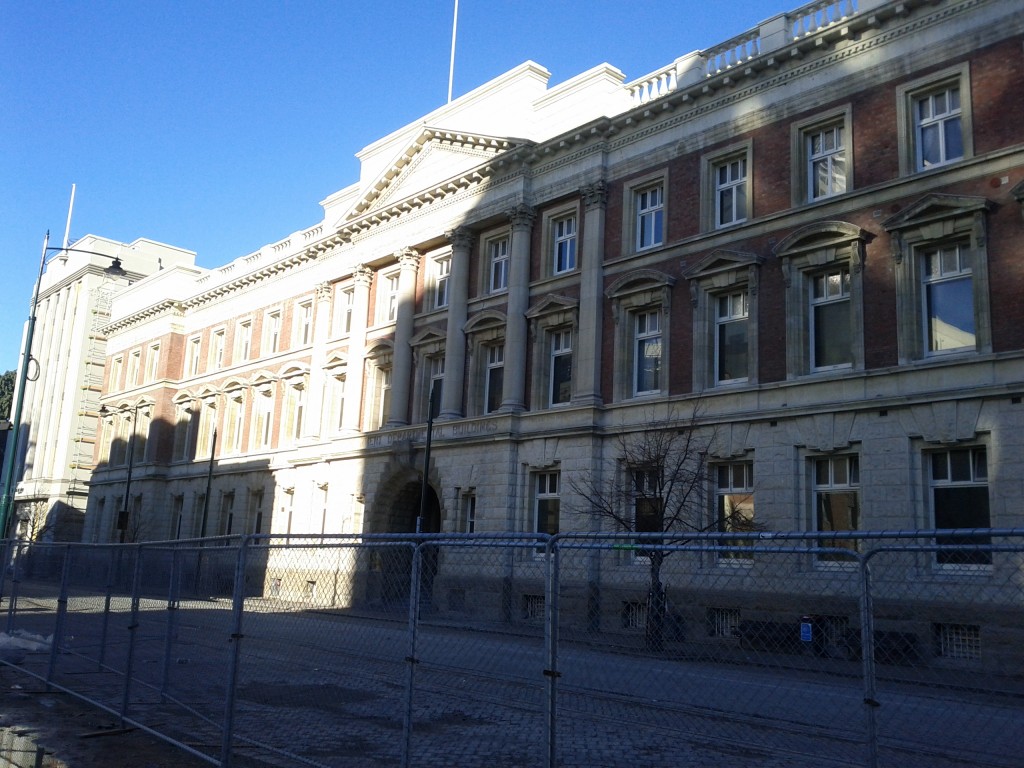 This old complex surprisingly looks to have emerged somewhat undamaged from the quake. The Novatel really stands out - looks like the buildings on both the left and right sides were interconnected and have since been pulled down, leaving this weirdly exposed tower. 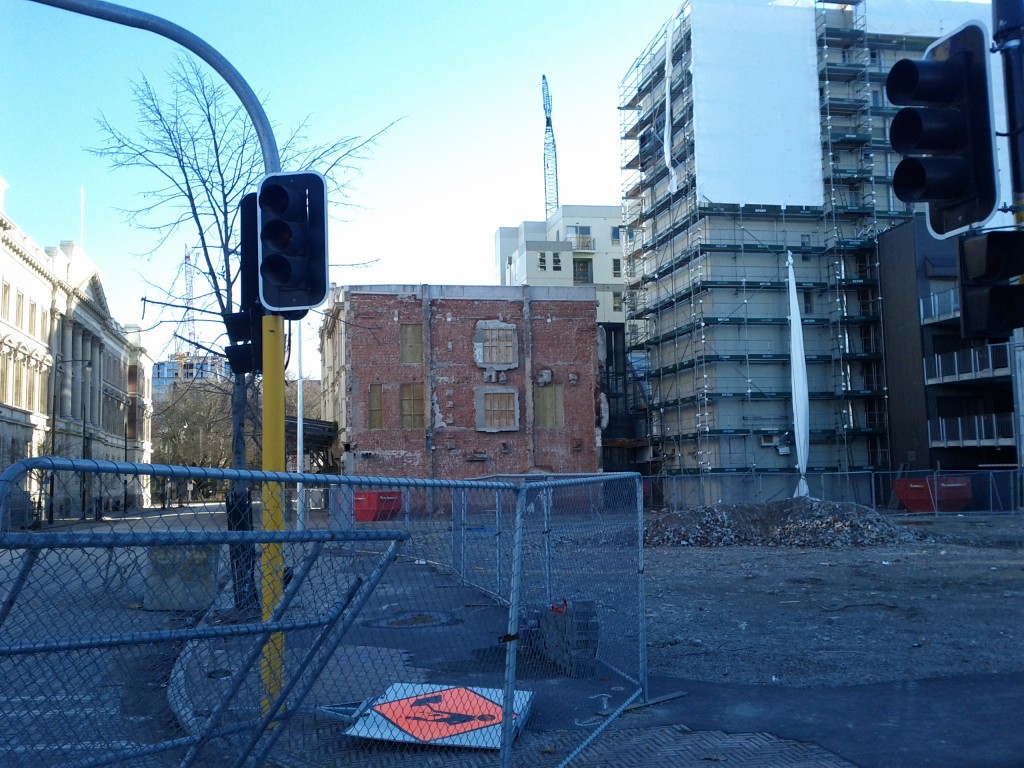 A still standing brick buildings, with remnants of the torn off neighbouring building still hanging to it. 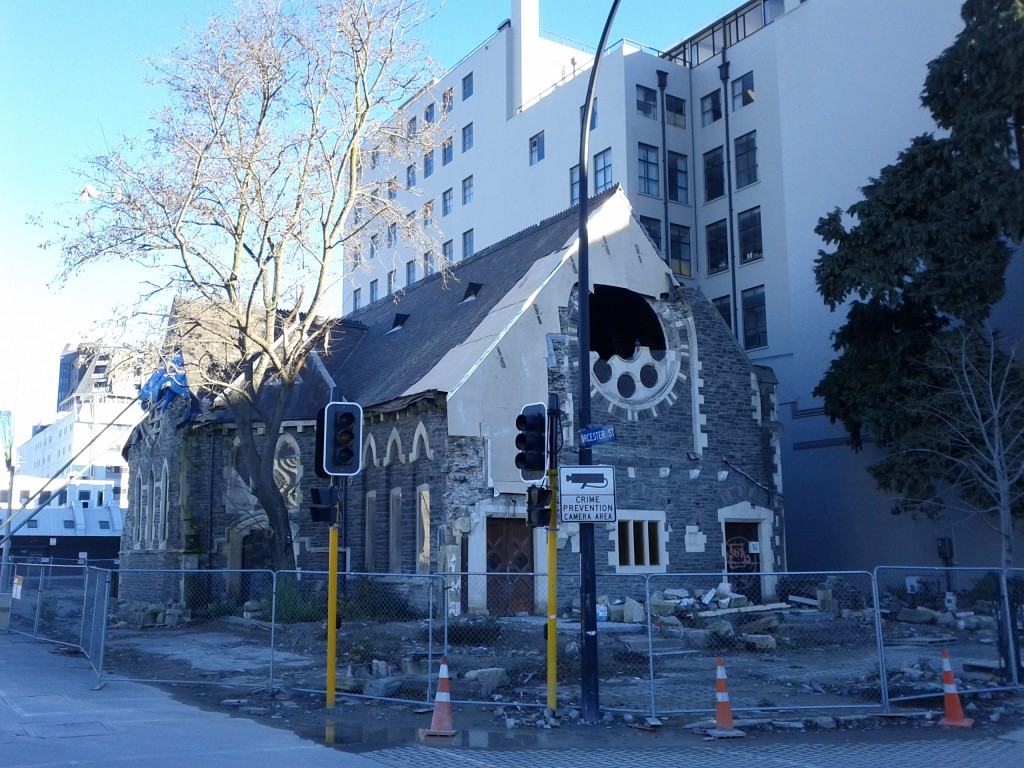 Still yet to find a surviving stone church Love the cardboard cutout workman wearing the high viz vest up in the building.

The building that I saw yesterday sitting alone in an otherwise deserted block looks like it wont be there that much longer – workmen have pulled off the side of the building and are busy tearing out the insides and throwing them down a chute.

A lot of buildings that look OK from the outside are cordoned off or are getting pulled down, so there must be a lot of structural damage that isn’t visible from the street. 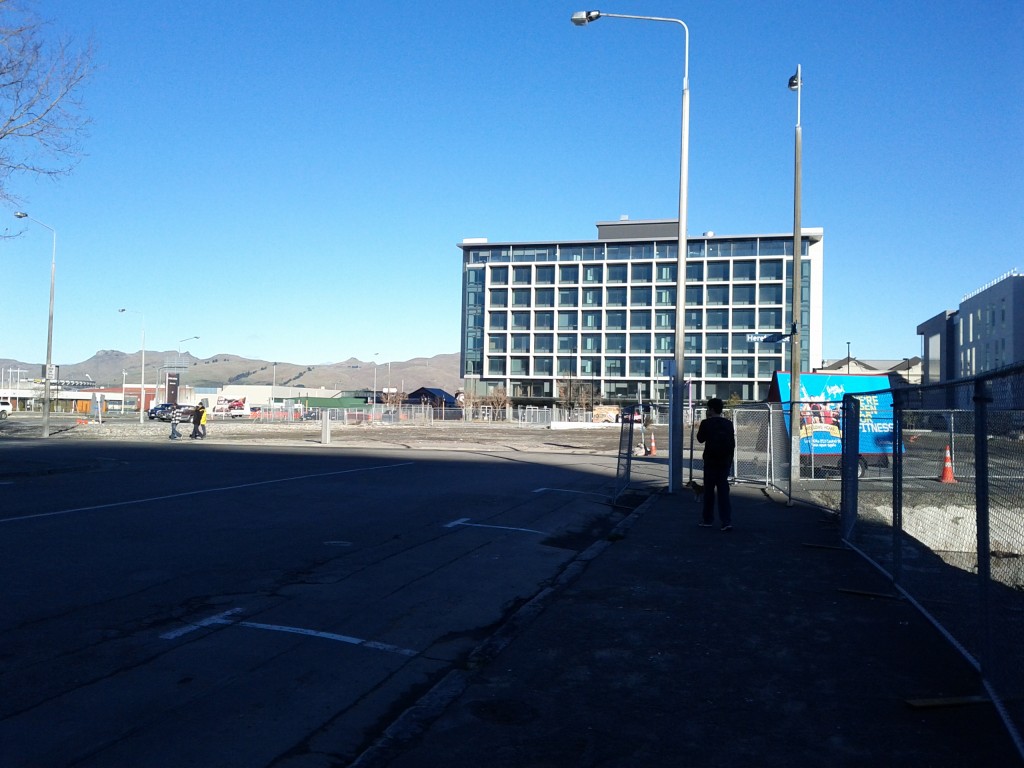 IRD's cordoned off building in the background - in front of it, the site of the infamous CTV building. Arts are still going strong down here, even amongst the rubble. The staircase to nowhere. Of all the places that could have fallen down, why not this shithole? :'( Back of High St

It’s not all demolition though, on our wanders I managed to find some new construction just outside of the red zone – certainly not as much as I expected, but at least it’s starting to take shape. Suburban Christchurch is really weird to me, I’m so used to always having suburban places being hilly and varied, but Christchurch is flat blocks as far as you go – it’s kind of reminds me of a higher-population Hawkes Bay.

It’s actually kind of the shame that there’s so much car usage here, this city would be great for a cycling/tram combination – it’s all flat and fairly compact, isn’t totally fucked yet like Auckland and it’s the ideal time for doing major infrastructure changes seeing as most of the CBD is unusable anyway.