Since I left Auckland at the end of August, it’s been a pretty hectic month, with flights all over the place and adventures in Wellington, Hastings, Melbourne and Sydney!

After we left Auckland, Lisa and I enjoyed a relaxed week in Wellington just spending time catching up with friends, having coffee, beer and just basically having a week of holiday. 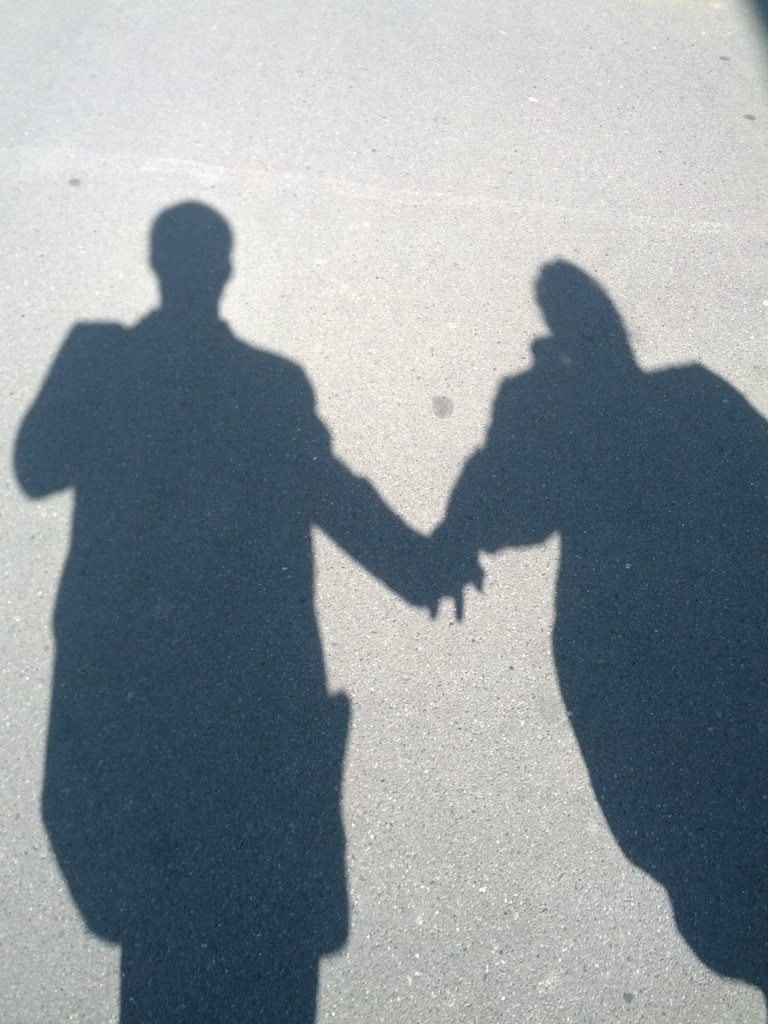 After a week in Wellington, we drove up to Hawke’s Bay for one last road trip in my trusty Toyota Starlet and spent the weekend with Lisa’s family, before I departed leaving her there, so that I could spend two weeks in Wellington tidying up affairs down there, whilst Lisa worked on tidying up and reducing the amount of stuff she had stored at her parents place.

Spending so long apart really sucks, but we both needed to do so in order to get stuff done, and there’s just not enough space at my parents place for us to stay for much longer than one night.

I ended up managing to sell off my beloved Toyota Starlet and a number of other items including my gaming computer, lots of computer cables, software, old flat stuff and other bits and pieces – it’s amazing how much stuff you collect over time, but I’ve managed to get it down so that I have two suitcases plus one cubboard at my parents place only – essentially only storing anything that will have use once I return to NZ in a couple of years.

After packing two suitcases, I flew out of Wellington on the 15th of September on a one-way ticket to start my AU adventure! 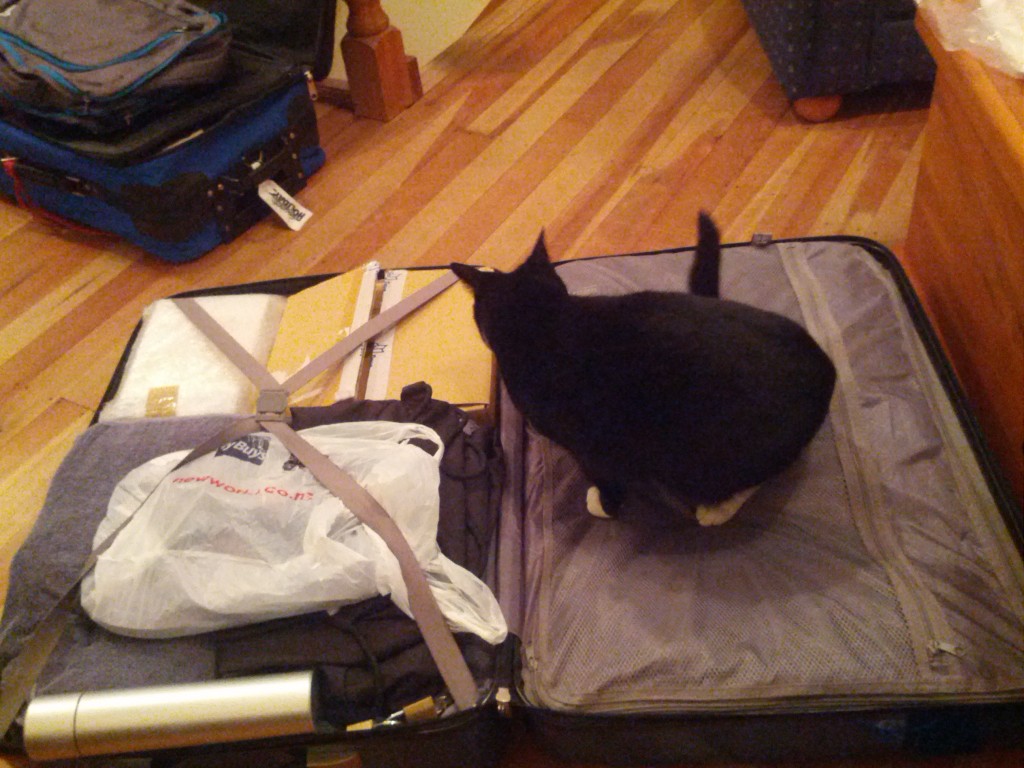 Kitty wants to come too!

I arrived in Melbourne looking for work and managed to spend a few days there doing job interviews, getting some basics like my bank accounts and cellphone sorted out and generally tripping around a new city and trying not to freak out at the fact that I’ve just moved country and in a single step changed EVERYTHING in my daily life.

I ended up booking and staying at the Miami Hotel, a 3.5 star place out in West Melbourne near a friends house, since I wanted a bit of my own space – it’s somewhere I’d happily recommend to anyone traveling on a budget, thanks to it’s around $90 a night

Thankfully I do have a number of friends in Melbourne, plus some Twitter friends I had not yet met in person, who helped take me around the place and to get some new sights. 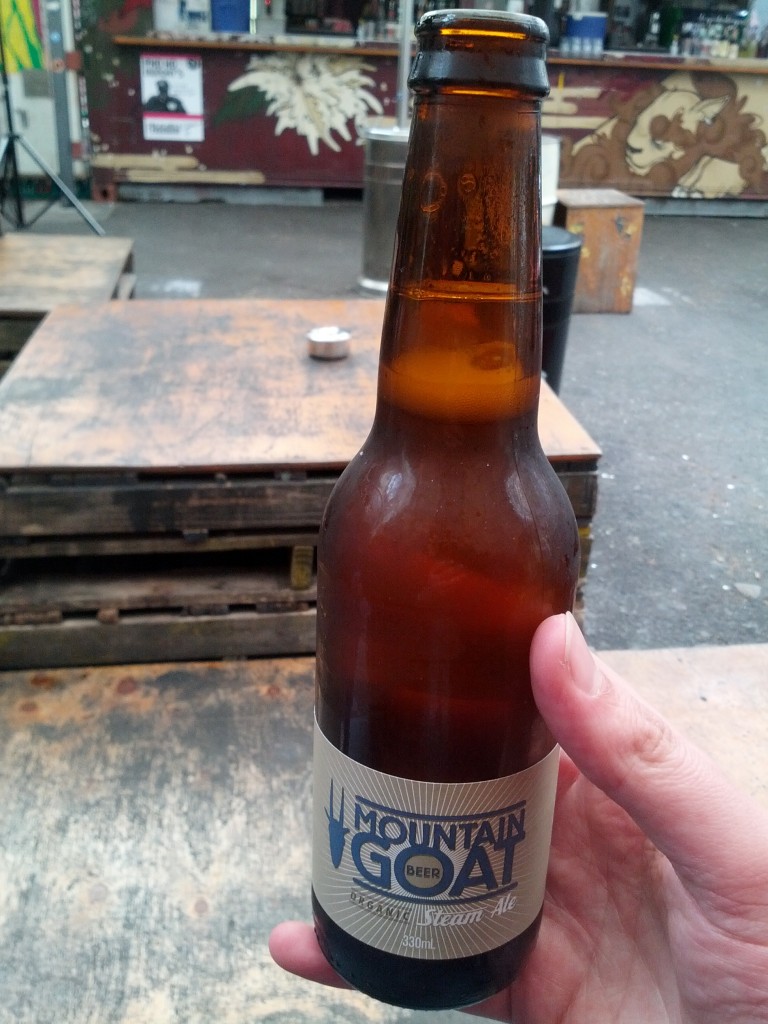 It’s not a hipster bar, until you sit on crates drinking organic beer and watching a DJ in baggy pants wearing a cap with ears designed to look like a horse re-mix popular tracks. 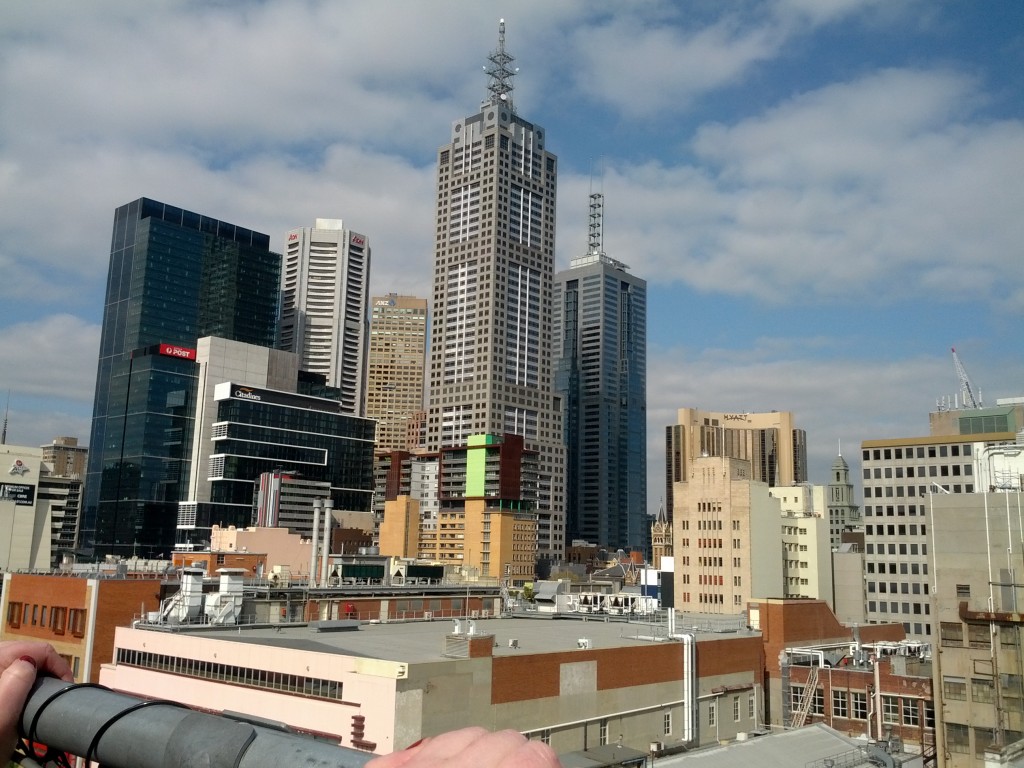 Melbourne CBD, from up on Rooftop Bar There’s no better introduction to Melbourne than starting my first day by visiting a hipster bar, followed by a rooftop bar looking out over the city and catching up with all my Melbourne Twitter friends. :-)

I also spent some time wandering the Victoria Markets, huge amount of stalls and fresh produce – even a meat hall which my friends had great delight dragging me into. :-/ I did a lot of walking whilst in Melbourne, I was staying up in West Melbourne, so ended up walking through the CBD almost daily and getting a feel of the city and learning new places. 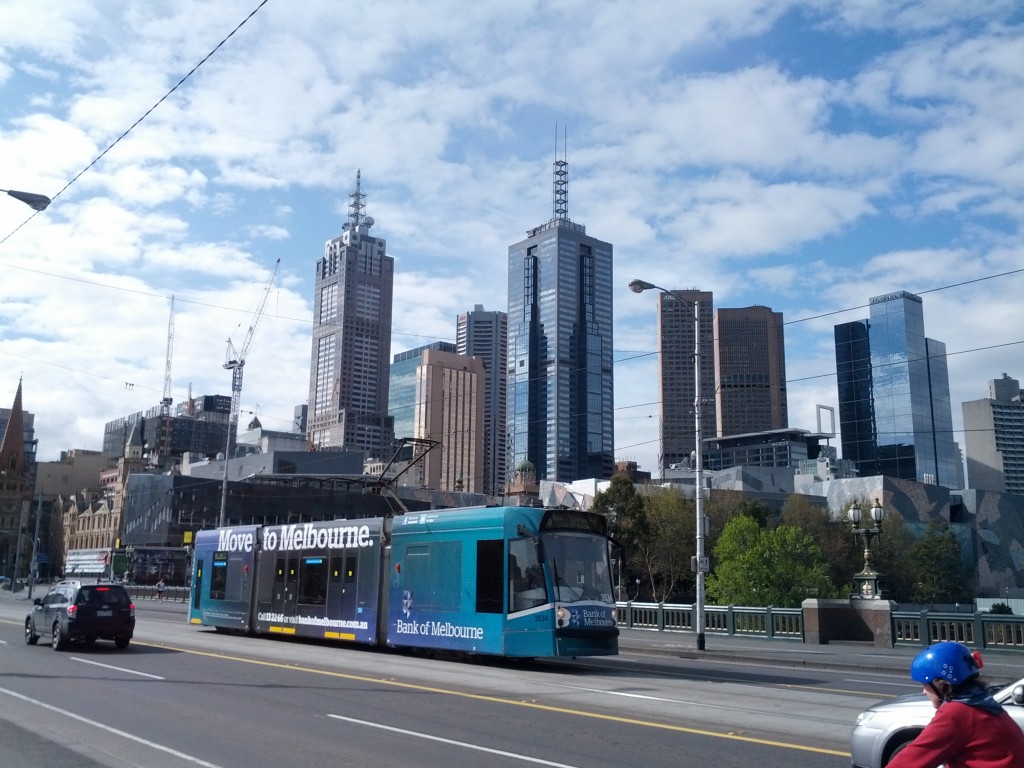 The Yarra river – I personally wouldn’t go swimming in it any time soon, looks a bit murky. :-/ 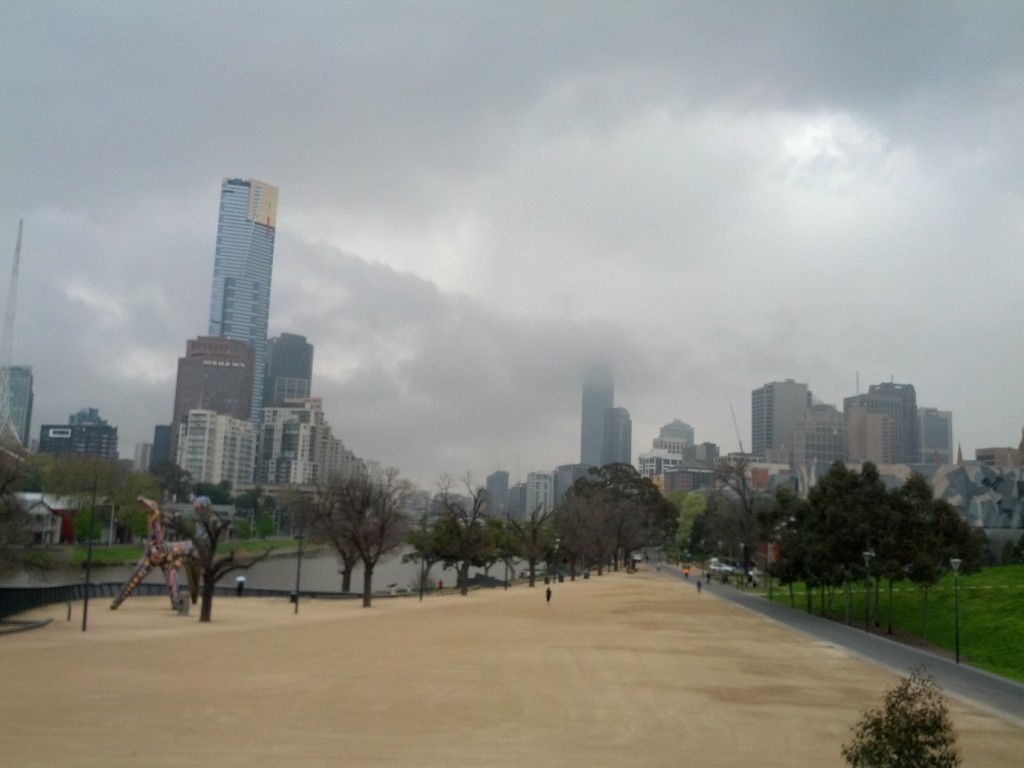 Rain clouds moving into the city. I also ended up training and tramming around the city lots, the transport system in Melbourne is amazing, so rapid and easy to get around, I got across town in about 15mins by jumping on a train, then a tram and using the Android Tram Hunter and Train Tracker applications to check schedules and routes. Melbourne at night, when coming out of Flinder’s Station

It’s a pretty amazing city – it took me a few days to get settled a bit more, but keen to spend a lot more time there.

Sadly my plans to get work there were interrupted, I had only been in Melbourne for a few days before I got the sad news that my grandfather in Wellington has been diagnosed with terminal cancer and has less than 4 weeks to live. :-(

I decided to take the time to fly back to NZ sooner rather than later, so that I could spend some time with him whilst I still can, so booked a flight back to Wellington at short notice – sadly this meant that I had to pass on a couple interesting opportunities that had arisen, but I guess there’s never really a good time for this sort of thing to happen.

After having booked my return flight, I then got a call at short notice from a contract recruiter, who had a position for a 3-month contract in Sydney for a Linux engineer – I managed to re-arrange my travel plans, and instead of flying directly back to Wellington, ended up flying into Sydney, spending a day there to interview and then flying back to Wellington from there. 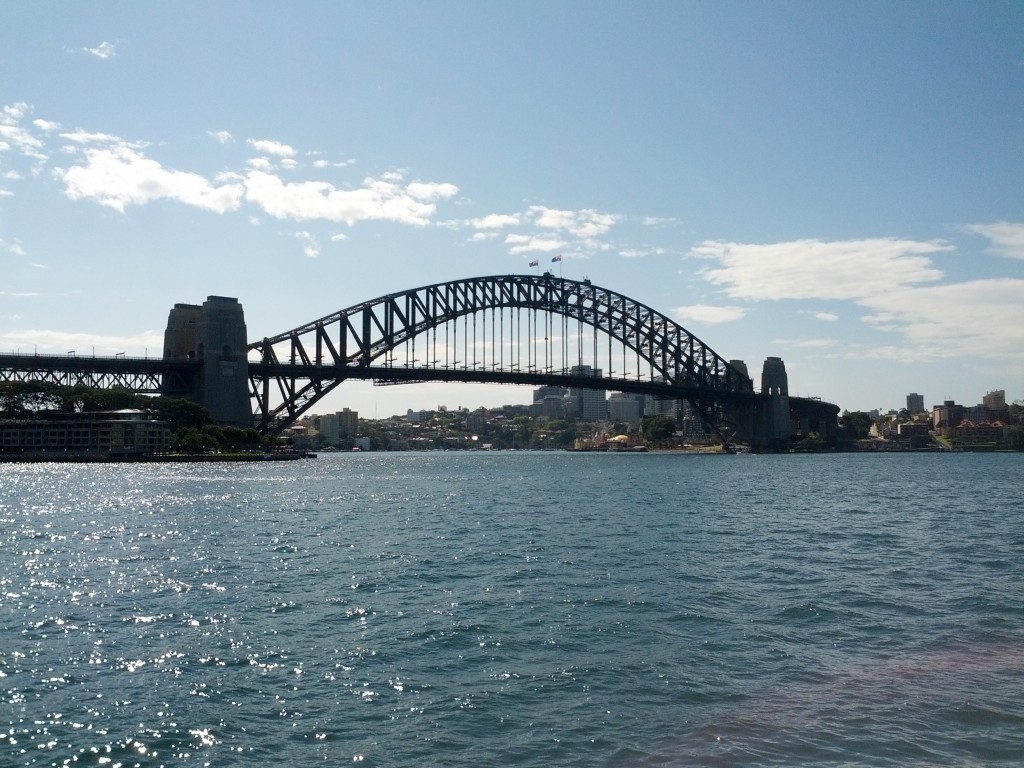 Doesn’t get much more iconic than the Sydney Harbor Bridge. Unlike Auckland, they were actually smart enough to put rail, walk and cycle crossings on it. 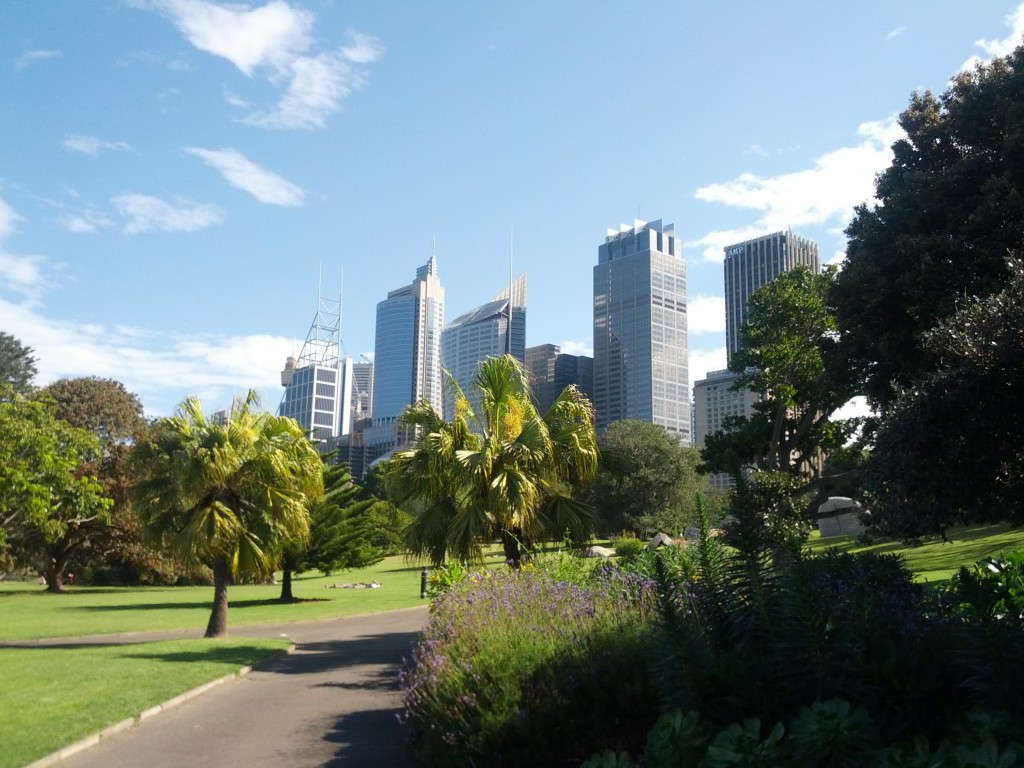 Sydney CBD from the botanical gardens down by the opera house. Meanwhile the job interview in Sydney returned good results, so this weekend, Lisa and I fly to Sydney to start my new 3-month contract in Sydney from the 1st of October!

Going to be a lot of fun and will offer some new challenges in a whole new city, 3 months will give us a chance to sample Sydney and figure out if we want to stay there for longer term, or we can shift to Melbourne at a later stage.

This entry was posted in Uncategorized and tagged melbourne, sydney, travel, work. Bookmark the permalink.