I’ve now been in Sydney for 5 weeks, settling into a new job, a new lifestyle and an entirely new city. Still very much in the tourist phase, there’s heaps we still need to see and do and only just starting to get settled really.

The first two weeks here were spent staying with some of Lisa’s relatives out in Hornsby Heights – nice suburban area, but it takes a bus and a train in order to get into the CBD, which is a 1.5 hour per-way trip – 3 hours a day, or even more depressingly 15 hours a week just to get to and from work.

Because of this commute we haven’t really done much in the first two weeks whilst here, most of my time was either traveling or looking for a place to live with Lisa.

Sydney residents seem to complain about the train service, but it’s actually one of the best I’ve used, really the only thing that lets it down is the lack of a smart card system like Melbourne’s Myki

Instead it uses magnetic stripe tickets which are purchased via ticket machines at every station. These tickets can be for single trips, returns, weekly, monthly or even yearly – I had enough trouble keeping the paper ticket in one piece for a week, so unsure how well monthly or yearly tickets are going to last. :-/ 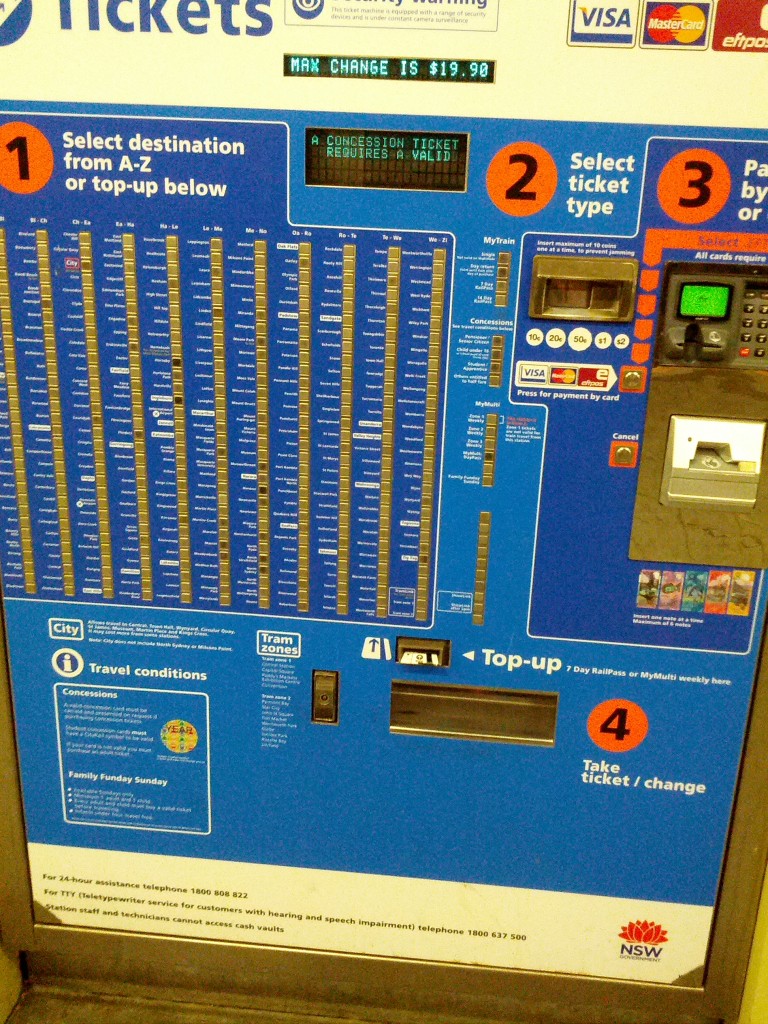 Buttons! All the buttons!

The trains do vary in quality, some of the ones being run are a bit beat up and graffitied, but they always seem to be on time and pretty reliable.

It’s the first city I’ve been in which runs double decker trains – Sydney tends to run them as two pairs of locomotives, each with 4 carriages – effectively 8 carriages, or 16 if you count the fact that they’re double decker and probably fit about twice of the average carriage. 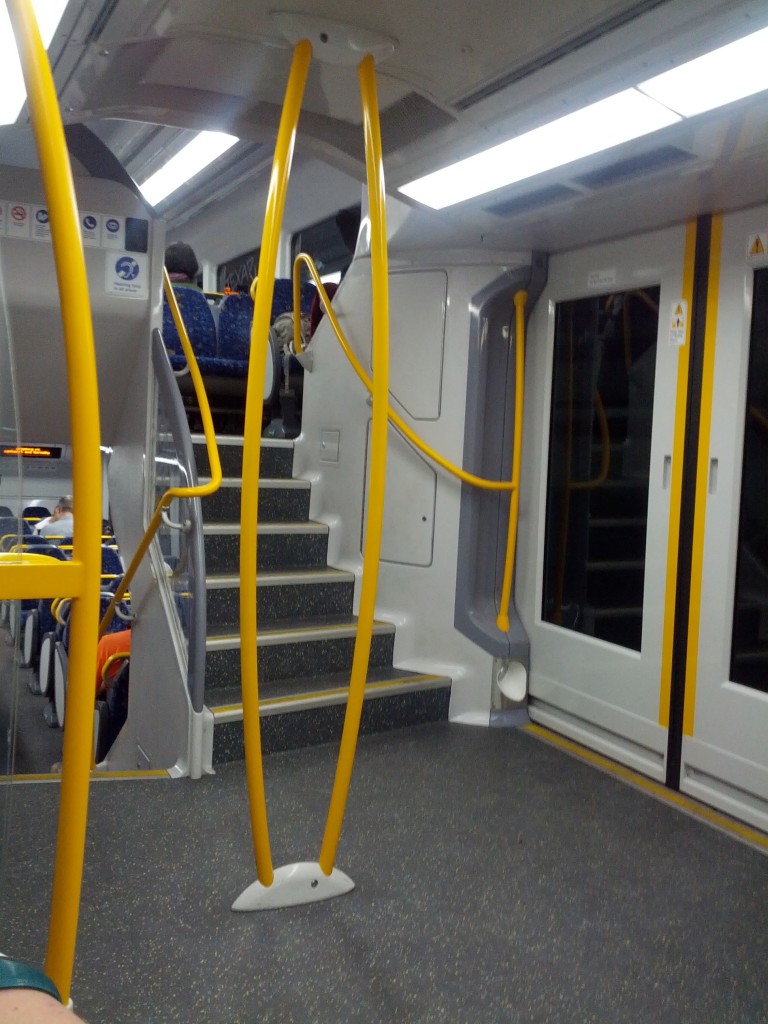 Inside one of the newer trains – note the upper and lower levels!

The suburban train network has the best views, most city training tends to be underground into subway stations, which do tend to be quite hot and cramped – thankfully Sydney has seemed to learn to build big, the newer stations in some suburbs are massive spacious underground caverns. 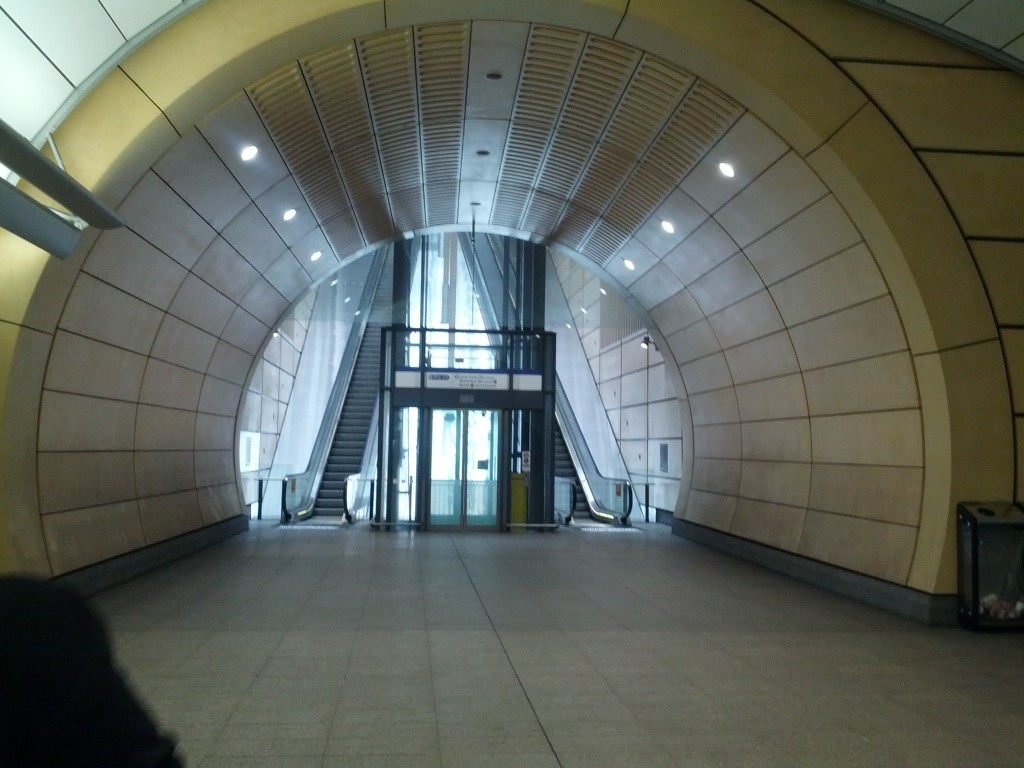 Unfortunately this large station entrance is an exception to the rule…

Of course you don’t necessarily have to take the underground rail…. 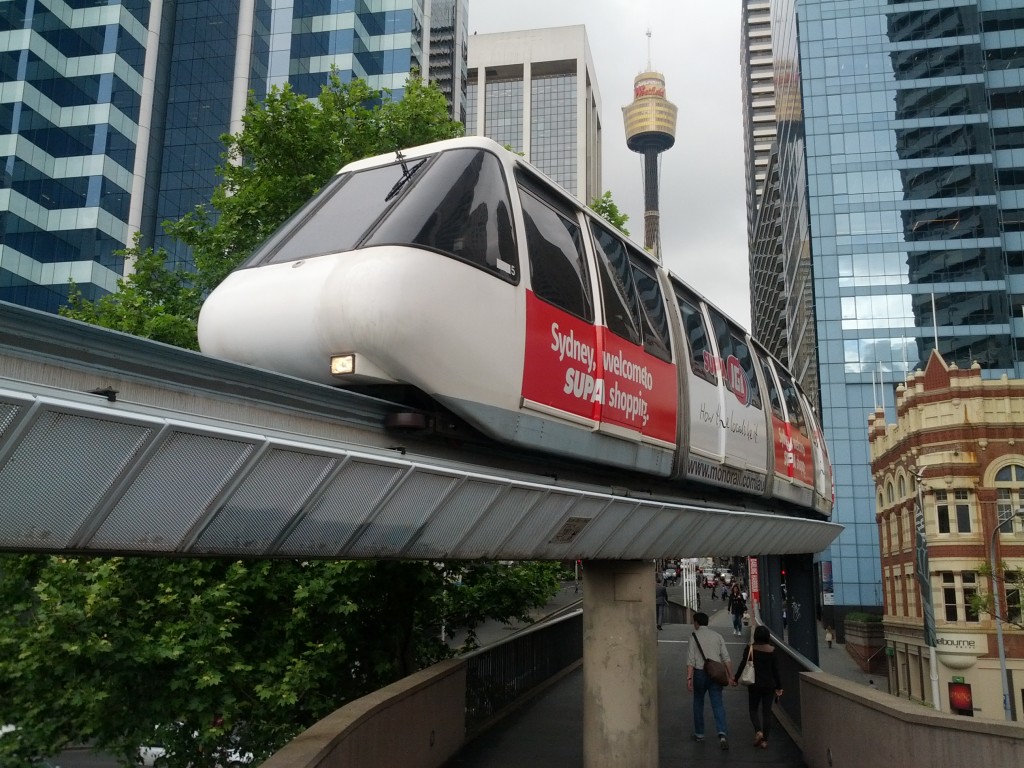 MONORAIL!!! I get to walk past it every day on the way to work, so cool.

There’s an active cycling scene in Sydney, particularly around where I live and work, although I’m not sure how anyone survives cycling in hot Sydney days which are pretty horrific survival experiences at times. :-/

Whilst there are cycle lanes, they can be a bit scary as a pedestrian as a lot of cyclists seem to consider themselves immune to the cyclist traffic lights and will sometimes ride right at you against the red light whilst pedestrians are crossing…. There’s also a few wonderful design failures such as shared pedestrian/cyclist zones that are no larger than 1 bike each way at a time leading to people riding a bit too close for comfort.

Thankfully we have now found a place and we’ve finally settled in somewhat – now living in an apartment on Clarence St, right in the middle of the CBD which makes my job in Pyrmont only a short 20minute walk, meaning I can actually spend time enjoying my evenings. 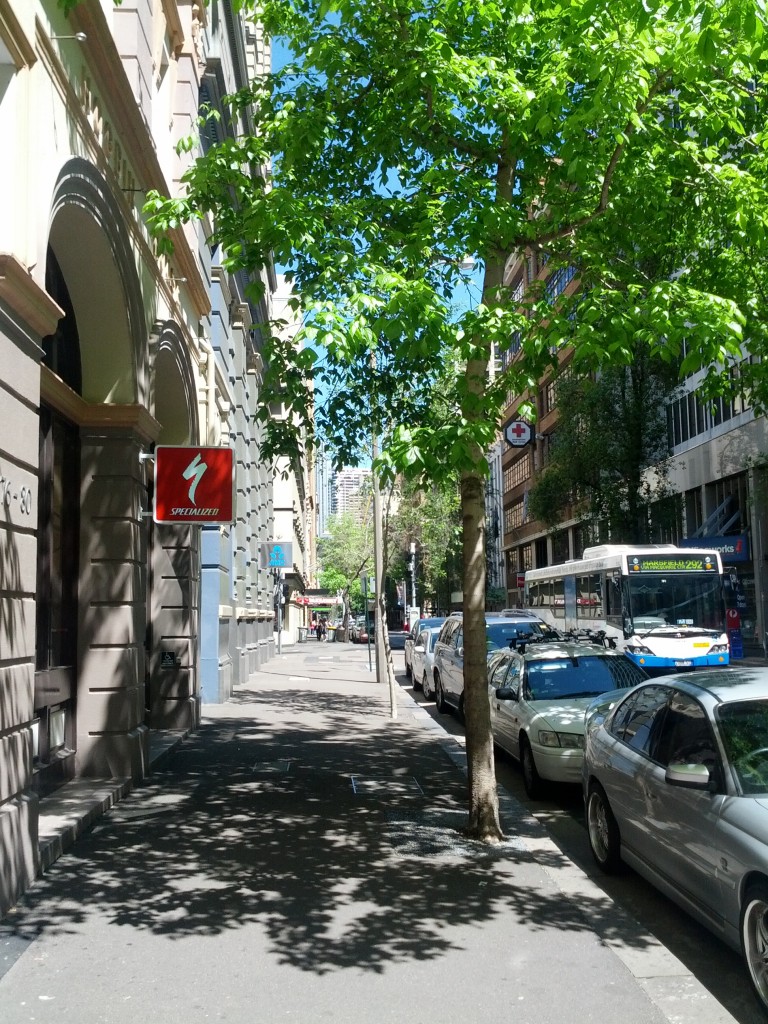 There’s a few pretty awesome perks to my commute, which takes me over Darling Harbour via Pyrmont Bridge and offers some pretty neat views. 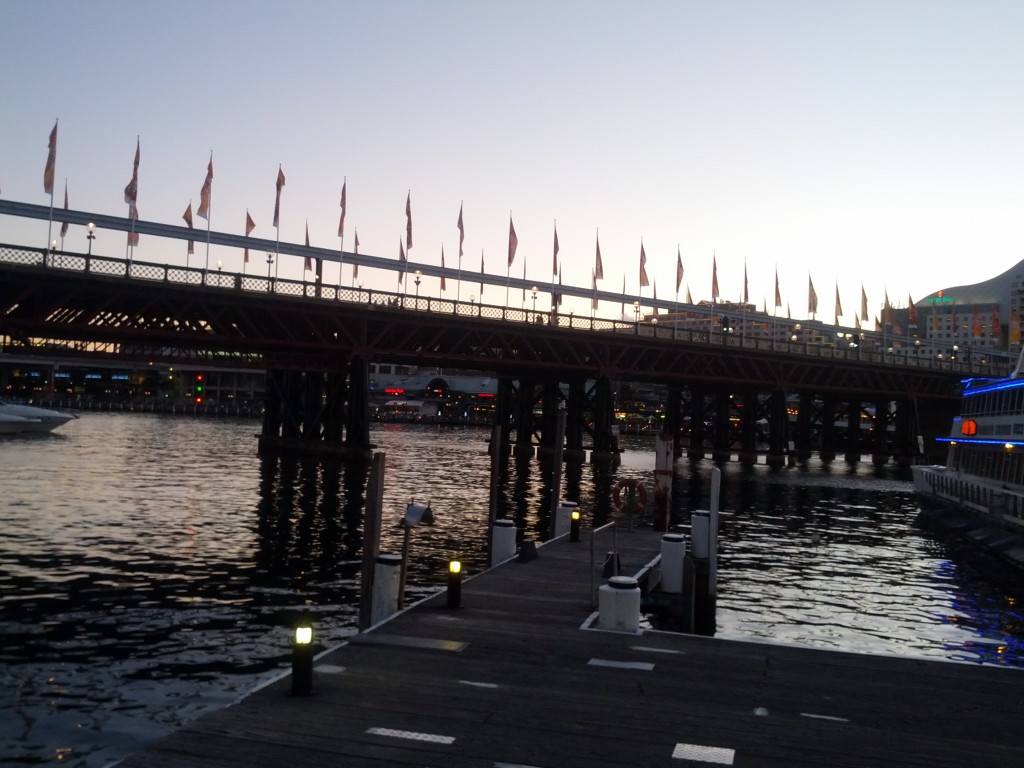 Pyrmont bridge in the evening – note the monorail track which goes over it. 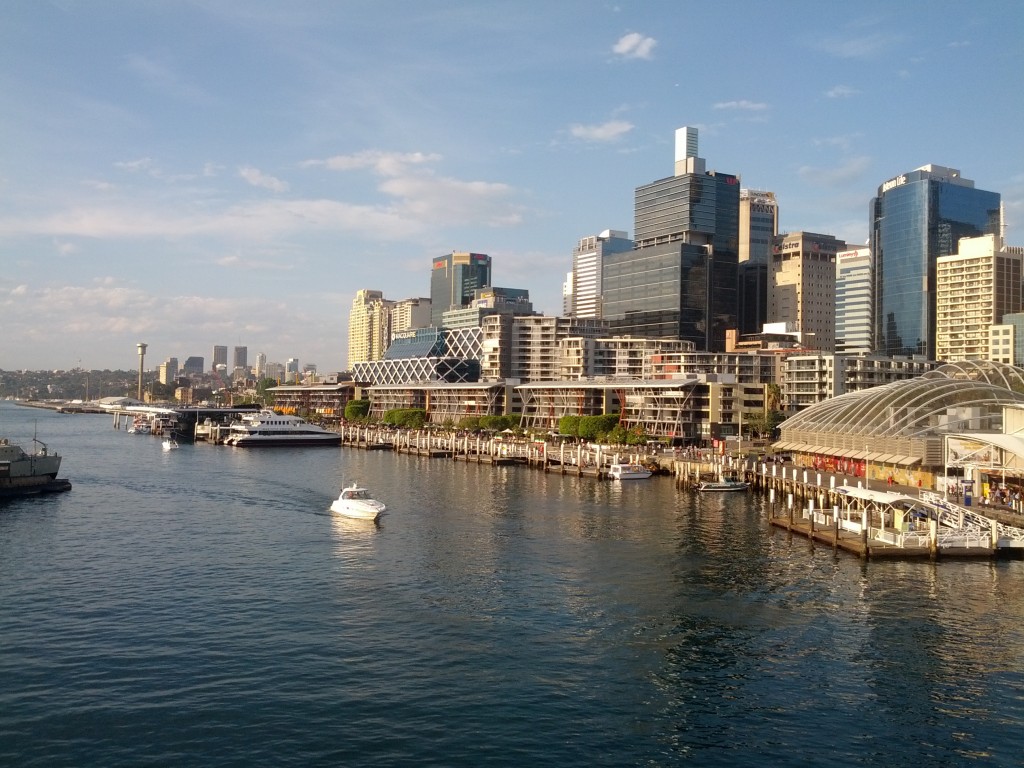 Harbor view – just off to the left is the rear end of a warship and a submarine at the maritime museum – but I’ll post more about these later on….

Generally things are going pretty well here, quite a culture shock compared to NZ, but we are getting out and about learning new places and things to see.

This entry was posted in Uncategorized and tagged life, monorail, sydney, trains, travel. Bookmark the permalink.