FlatTraffic is an AGPL web interface for analyzing NetFlow records and showing statistics designed to make it clear and easy to determine which hosts of the network are consuming data.

It’s still in beta stage, the application is functional and is documented, but may have bugs and need a few tweaks here and there to bring it up to a stable grade… I’m releasing now so that people can start using and breaking it to get a well tested piece of code to enable a 1.0.0 release. 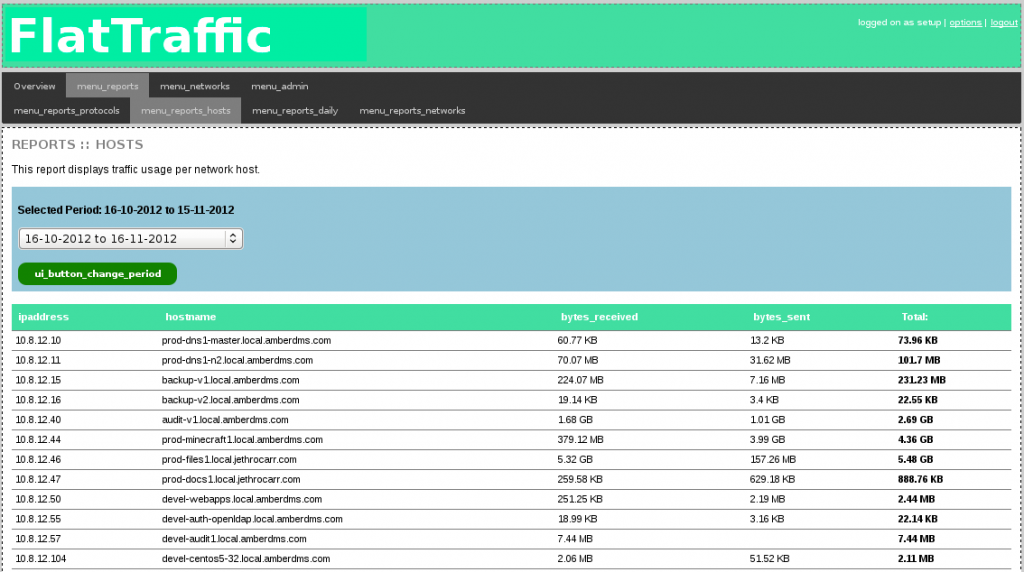 I’d be lying if I said this was a complete list of my computers….

As you are probably aware, New Zealand (and Australia to a lesser degree) are victims of the much hated internet data cap, an unfortunate response to the economic pressures of providing internet services in our markets.

This is a particular issue when you have situations such as flatmates sharing a connection or a a collection of servers behind an internet link which are hungrily consuming the data cap every second.

To help keep the peace with flatmates I started writing this application when I was back in Wellington to report on traffic usage, using a SQL DB of NetFlow records collected by the gateway. It got put on hold somewhat after moving to Auckland and getting a fat DSL plan from Snap NZ, however it recently got resurrected so that I could track down which host on my home server was chewing through the much smaller data cap at it’s new home at my parents place (sadly my full tower beauty wouldn’t fit into my plane luggage).

FlatTraffic is focused at being a geek home/small server environment tool rather than a general purpose NetFlow analyzer – there are more powerful tools already available for that, my design focus with FlatTraffic is simplicity and doing one job really well.

FlatTraffic assumes you’re using it in a conventional ISP customer situation and allows you to configure the monthly date that your service renews on, so that it will show data usage periods that match your billing period. You can also configure other key options such as 1000 vs 1024 bytes and what automatic DB truncating options should be turned on.

There are currently four reports defined in FlatTraffic:

FlatTraffic doesn’t replace a NetFlow collector, you still need to understand the principles of setting up NetFlow traffic accounting and configuring a collector that stores records into a SQL database.

I’ve included some sample scripts for use with flowd (from the flow-tools collection) however I’m going to work on adding support for some better collectors. There’s also work needed for IPv6, since whilst the app UI is IPv6 compatible, the NetFlow reporting is strictly IPv4 only currently.

(Unfortunately I also have issues in that the iptables module I’m using to generate NetFlow records don’t seem to have an ip6tables version, so I’m a bit stuck for generating IPv6 records currently without adding a device between my server and the WAN connection :-(  ).

In my own environment I hand out static DHCP leases to all my systems along with having configured reverse DNS so when doing a host report I can clearly see which host is responsible for what usage – if you have dynamically addressed hosts doing lots of traffic, things won’t be too helpful until you fix the leases for at least the high users.

Please sir, can I have some more flow records?

I’m currently using it with NetFlow DBs with several months worth of data without issue, but it needs further and wider testing to determine how scalable it really is. I’ve worked to avoid putting much memory hungry logic in PHP, instead FlatTraffic tries to do as much as possible inside MySQL itself and uses some easily indexable queries.

To get started with FlatTraffic, visit the project page and install from either RPM, Source Tarball or direct from SVN – and send me feedback, good or bad. If you’re using another type of NetFlow collector other than flowd and would like support take a look at this page. Also note that there’s no reason why FlatTraffic couldn’t end up using other sources of data, it’s not architecturally limited to just NetFlow if you can get similar traffic details in some other form that would do fine.

If you end up using this application, please let me know how you find, always good to know what is/isn’t useful for people.