Sadly Android is giving me further reason for dissatisfaction with the discovery that Google Play refuses to correctly detect the current country I’m in and is blocking content from them.

Being citizens of New Zealand and living in Australia, both Lisa and I have a mixture of applications for services in both countries –  a good example being banking apps, where we tend to want to be able to easily manage our financial affairs in both countries.

The problem is, that all my phones are stuck as being in New Zealand, whilst Lisa’s phone has decided to be stuck to AU. This hasn’t impacted me much yet, since the Commbank application isn’t region locked and being treated by Google as being “inside” NZ I can install the ANZ Go Money application from within AU.

However because Lisa’s phone is the other way around and stuck in AU, she’s unable to install both the ANZ Go Money and Vodafone NZ My Account application, thanks to the developers of both applications region locking them to NZ only.

What makes the issue even more bizarre, is that both of Lisa and my Google Accounts were originally created in New Zealand yet are behaving differently. 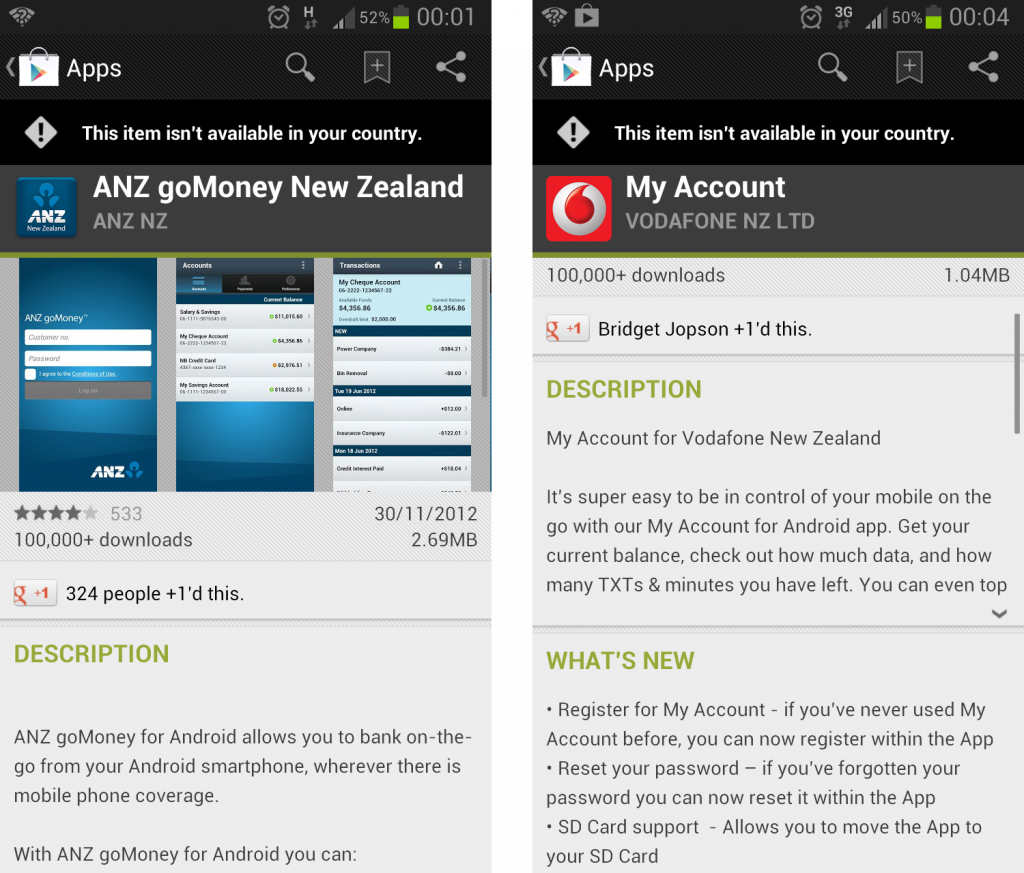 Thou shalt not pass!

There’s a few particularly silly mistakes here. Firstly ANZ shouldn’t be assuming their customers are always in NZ, us Kiwis do like to get around the world and tend to want to continue managing our financial affairs from other countries. The app is clearly one that should be set to a global region.

I suspect they made this mistake to try and avoid confusing AU and NZ ANZ customers with different apps, but surely they could just make it a bit clearer in the header of the app name…

Secondly Google… I’m going to ignore the fact that they even offer region locking for applications (urgghhg DRM evil) and going to focus on the fact that the masters of information can’t even detect what fucking country a user is in properly.

I mean it must be so hard to do, when there are at least 4 ways of doing it automatically.

Sure, none of these are guaranteed to be perfect, but using at least 3 of the above and selecting the majority answer would lead to a pretty accurate system. As it is, I have several phones currently powered up around my apartment in AU, none of which are validating as being in AU at all: 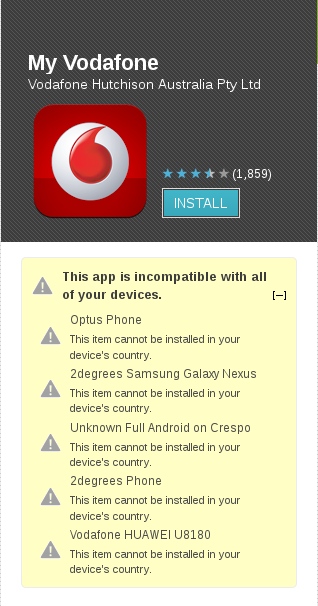 Instead there is an option buried somewhere in Google’s maze of applications and settings interfaces which must be setting the basis for deciding the country our phones are in.

To make things even more annoying is that I can’t even tell if making a change helps or not. How do I tell if the phone is *reading* the new settings? I’ve done basic stuff like re-sync Google, but also have gone and cleared the Google Play service cache and saved settings on the phone, to no avail.

It’s a bit depressing when even Apple, the poster child for lock down and DRM makes region changing as simple as signing into iTunes with a new country account and installing an application that way.

Restricting and limiting content by geographic regions makes no sense in a modern global world and it’s just sad to see Google continuing to push this outdated model instead of making a stand and adopting 21st century approaches.

If anyone knows how to fix Google to see the correct country it would be appreciated… if you know how to get Google to fix this bullshit and let us install the same applications globally, even better.