Having moved to AU means that I now have two cell phones – one with my AU SIM card and another with my NZ SIM card which I keep around in order to receive the odd message from friends/contacts back home and far too many calls from telemarketers.

I didn’t want to have to carry around a second mobile and the cost of having a phone on roaming in AU makes it undesirably expensive to keep in touch with anyone via SMS messaging, so went looking for a solution that would let me get my SMS messages from my phone to my laptop and phone in a more accessible form.

I considered purchasing an SMS gateway device, but they tend to be quite expensive and I’d still have to get some system in place for getting messages from the device to me in an accessible form.

Instead I realised that I could use one of the many older Android cellphones that I have lying around as a gateway device with the right software. The ability to run software makes them completely flexible and with WiFi and 3G data options, it would be entirely possible to leave one in NZ and take advantage of the cheaper connectivity costs to send SMS back to people from within the country.

I was able to use an off-the-shelf application “SMS Gateway” to turn the phone into an SMS gateway, with the option of sending/receiving SMS messages via HTTP or SMTP/POP3.

However emails aren’t the best way to send and reply to SMS messages, particularly if your mail client decides to dump in a whole bunch of MIME data. I decided on a more refined approach and ended up writing a program called “SMStoXMPP“.

Like the name suggestions, SMStoXMPP is lightweight PHP-based SMS to XMPP (Jabber) bi-directional gateway application which receives messages from an SMS gateway device/application and relays them to the target user via XMPP instant messages. The user can then reply via XMPP and have the message delivered via the gateway to the original user.

For me this solves a major issue and means I can leave my NZ cell phone at my flat or even potentially back in NZ and get SMS on my laptop or phone via XMPP no matter where I am or what SIM card I’m on.

To make conversations even easier, SMStoXMP does lookups of the phone numbers against any CardDAV address book (such as Google Contacts) and displays your chosen name for the contact. It even provides search functions to make it even easier to find someone to chat to. 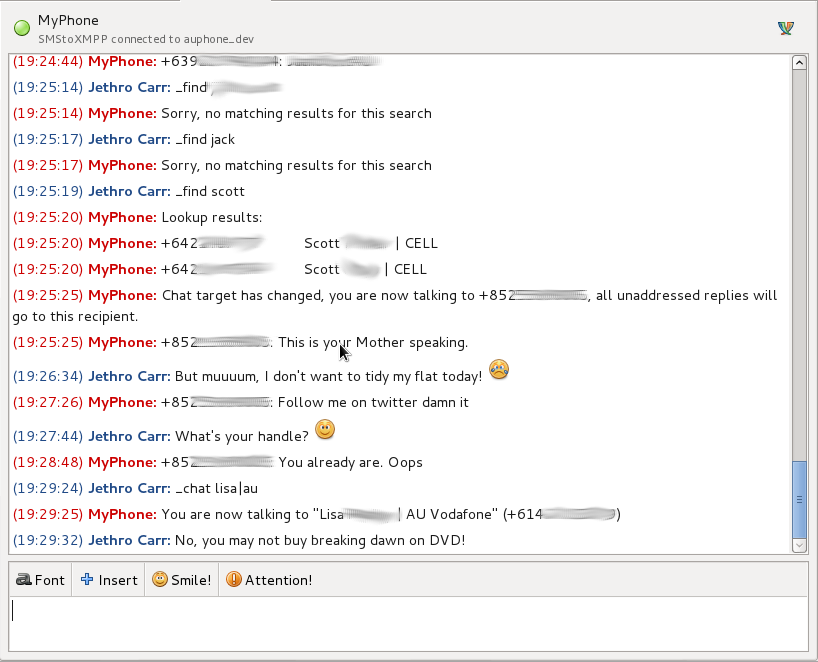 Chatting with various contacts via SMStoXMPP with Pidgin as a client.

I’ve released version 1.0.0 today, along with documentation for installing, configuring gateways and documentation on how to write your own gateways if you wish to add support for other applications.

Generally it’s pretty stable and works well – there are a few enhancements I want to make to the code and a few bits that are a bit messy, but the major requirements of not leaking memory and being reliably able to send and receive messages have been met. :-)

Whilst I’ve only written support for the one Android phone base gateway, I’m working on getting a USB GSM modem to work which would also be a good solution for anyone with a home server.

It would also be trivial to write in support for one of the many online HTTP SMS gateways that exist if you wanted a way to send messages to people and didn’t care about using your existing phone number.