Why SSL is really ISL

Secure transmission of data online is extremely important to avoid attackers intercepting data or claiming to be a site that they are not. To provide this, a technology called SSL/TLS (and commonly seen in the form of https://) was developed to provide security between an end user and a remote system to guarantee no interception or manipulation of data can occur during communications.

SSL is widely used for a huge number of websites ranging from banks, companies, and even this blog, as well as other protocols such as IMAP/SMTP (for Email) and SSH (for remote server shell logins).

As a technology, we generally believe that the cryptography behind SSL is not currently breakable (excluding attacks against some weaker parts of older versions) and that there’s no way of intercepting traffic by breaking the cryptography. (assuming that no organisation has broken it and is staying silent on that fact for now).

However this doesn’t protect users against an attack by the attacker going around SSL and attacking at other weak points outside the cryptography, such as the validation of certificate identity or by avoiding SSL and faking connections for users which is a lot easier than having to break strong cryptography.

It’s generally much easier to beat SSL by simply avoiding it entirely. A technology aware user will always check for the https:// URL and for the lock symbol in their browser, however even us geeks sometimes forget to check when in a hurry.

By intercepting a user’s connection, an attacker can communicate with the secure https:// website, but then replay it to the user in an unencrypted form. This works perfectly and unless the user explicitly checks for the https:// and lock symbol, they’ll never notice the difference. 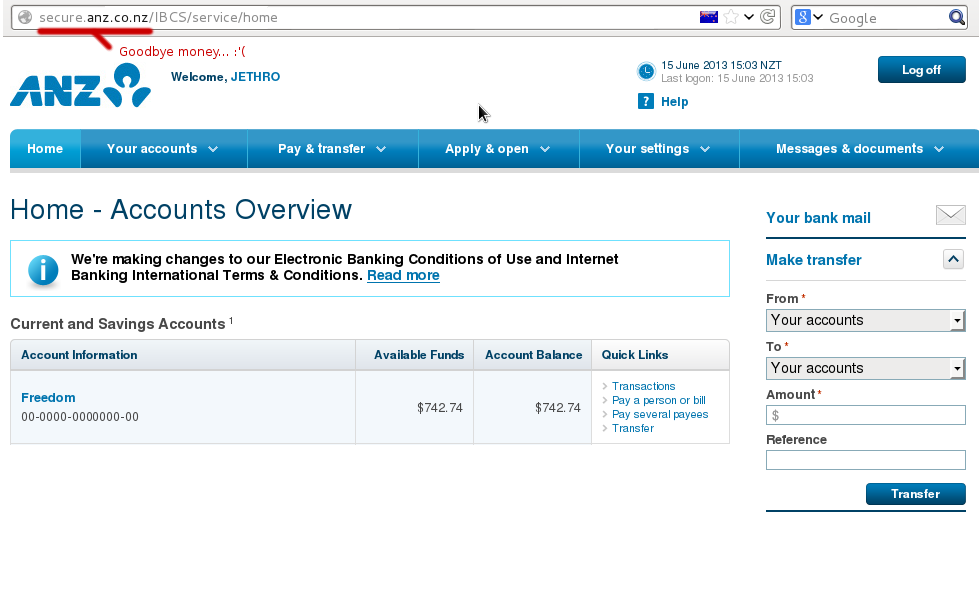 Anyone on the path of your connection could use this attack, from the person running your company network, a flatmate on your home LAN with a hacked router or any telecommunications company that your traffic passes through.

However it’s not particularly sophisticated attack and a smart user can detect when it’s taking place and be alerted due to a malicious network operator trying to attach them.

Whilst SSL is vendor independent, by itself SSL only provides security of transmission between yourself and a remote system, but it doesn’t provide any validation or guarantee of identity.

In order to verify whom we are actually talking to, we rely on certificate authorities – these are companies which for a fee validate the identify of a user and sign an SSL certificate with their CA. Once signed, as long as your browser trusts the CA, your certificate will be accepted without warning.

Your computer and web browsers have an inbuilt list of hundreds of CAs around the world which you trust to be reliable validators of security – as long as none of these CAs sign a certificate that they shouldn’t, your system remains secure. If any one of these CAs gets broken into or ordered by a government to sign a certificate, then an attacker could fake any certificate they want to and intercept your traffic without you ever knowing. 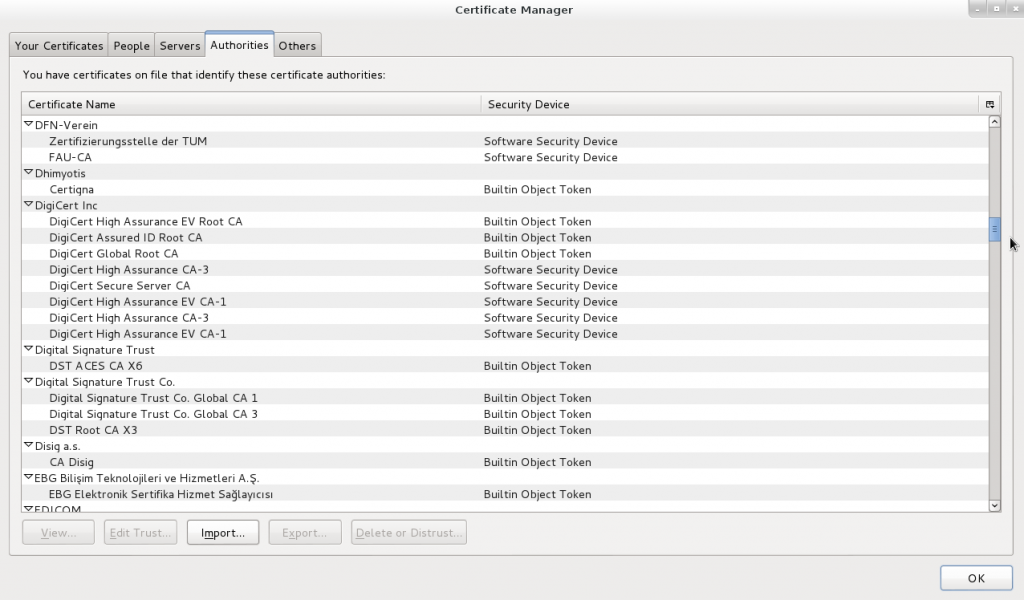 You don’t even need to be a government to exploit this – if you can get access to the end user device that’s being used, you can attack it.

A system administrator in a company could easily install a custom CA into all the desktop computers in the company By doing this, that admin could then generate certificates faking any website they want, with the end user’s computer accepting the certificate without complaint.

The user can check for the lock icon in their browser and feel assured of security, all whilst having their data intercepted in the background by a malicious admin. This is possible due to the admin-level access to the computer, but what about external companies that don’t have access to your computer, such as Internet Service Providers (ISPs) or an organisation like government agencies*? (* assuming they don’t have a backdoor into your computer already).

An ISP’s attack options are limited since they can’t fake a signed certificate without help from a CA. There’s also no incentive to do so, stealing customer data will ensure you don’t remain in business for a particularly long time. However an ISP could be forced to do so by a government legal order and is a prime place for the installation of interception equipment.

A government agency could use their own CA to sign fake certificates for a target they wish to intercept, or force a CA in their jurisdiction to sign a certificate for them with their valid trusted CA if they didn’t want to give anything away by signing certificates under their organisation name. (“https://wikileaks.org signed by US Government” doesn’t look particularly legit to a cautious visitor, but would “https://wikileaks.org signed by Verisign” raise your suspicions?)

If you’re doubting this is possible, keep in mind that your iOS or Android devices already trust several government CAs, and even browsers like Firefox include multiple government CAs. 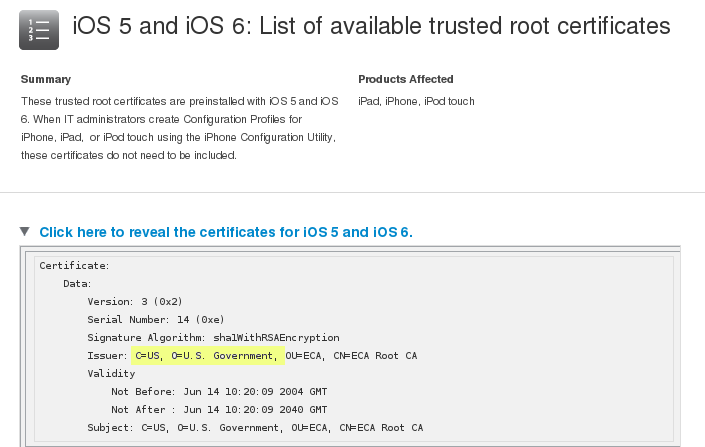 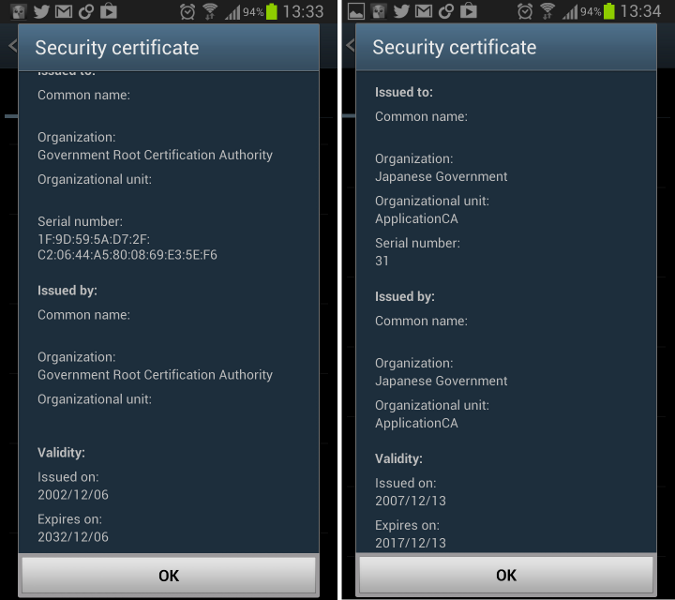 It’s getting even easier for a government to intercept if desired –  more and more countries are legislating lawful interception requirements into ISP legalisation, requiring ISPs to intercept a customer’s traffic and provide it to a government authority upon request.

This could easily include an ISP being legally required to route traffic for a particular user(s) through a sealed devices provided by the government which could be performing any manner of attacks, including serving up intercepted SSL certs to users.

Having established that by default, your SSL “secured” browser is probably prime for exploit, what is the fix?

Fortunately the trick of redirecting users to unsecured content is getting harder with browsers using methods such as Extended Validation certs to make the security more obvious – but unless you actually check that the site you’re about to login to is secure, all these improvements are meaningless.

Some extensions such as HTTPS Everywhere have limited whitelists of sites that it knows should always be SSL secured, but it’s not a complete list and can’t be relied on 100%. Generally the only true fix for this issue, is user education.

The CA issue is much more complex – one can’t browse the web without certificate authorities being trusted by your browser so you can’t just disable them. There are a couple approaches you could consider and it really depends whether or not you are concerned about company interception or government interception.

If you’re worried about company interception by your employer, the only true safe guard is not using your work computer for anything other than work. I don’t do anything on my work computer other than my job, I have a personal laptop for any of my stuff and in addition to preventing a malicious sysadmin from installing a CA, by using a personal machine also gives me legal protections against an employer reading my personal data on the grounds of it being on a company owned device.

A best-efforts approach would be to use a browser plugin such as Certificate Patrol, which alerts when a certificate on a site you have visited has changed – sometimes it can be legitimate, such as the old one expiring and a new one being registered, or it could be malicious interception taking place. It would give some warning of wide spread interception, but it’s not an infallible approach.

A more robust approach would be to have two different profiles of your browser installed. The first for general web browsing and includes all the standard CAs. The second would be a locked down one for sites where you must have 100% secure transmission.

In the second browser profile, disable ALL the certificate authorities and then install the CAs or the certificates themselves for the servers you trust. Any other certificates, including those signed by normally trusted CAs would be marked as untrusted.

In my case I have my own CA cert for all my servers, so can import this CA into an alternative browser profile and can safely verify that I’m truly taking to my servers directly, as no other CA or cert will ever be accepted.

I’m a smart user and did all this, am I safe now?

Great stuff, you’re now somewhat safer, but a determined attacker still has several other approaches they could take to exploit you, by going around SSL:

The best security is awareness of the risks

There’s never going to be a way to secure your system 100%  – but by understanding some of the attack vectors, you can decide what is a risk to you and make the decision about what you do and don’t need to secure against.

You might not care about any of your regular browsing being intercepted by a government agency, in that case, keep browsing happily.

You might be worried about this since you’re in the region of an oppressive regime, or are whistle-blowing government secrets, in which case you may wish to take steps to ensure your SSL connections aren’t being tampered with.

And maybe you decided that you’re totally screwed and resort to communicating by meeting your friends in person in a Faraday cage in the middle of nowhere. It all comes down to the balance of risk and usability you wish to have.