Whilst the Macbook line generally features Intel GPUs only, the flagship Macbook Pro 15″ model like mine features dual GPUs – the low power Intel GPU, as well as a high(er) performance Nvidia GPU for when graphical performance is required for certain business applications (*cough* Minecraft *cough*).

MacOS dynamically switches between the different GPUs as it deems necessary, which is a smart idea – except that MacOS seems to get led astray by malware such as Flash Player which launches in the background of some webpage somewhere and proceeds to force the GPU to run on Nvidia only, chewing up battery yet not even rendering anything.

To be fair to Apple, this is a fault with the crapiness of Flash Player and not MacOS. It certainly gives ammunition to Apple’s decision to ditch having Flash Player pre-installed on MacOS systems in 2010 to conserve battery life, the Nvidia GPU certainly shortens my laptop’s battery life by about 30mins when just sitting idle.

Annoyingly the only way I found out that my Mac wasn’t using the Intel GPU most of the time, was by installing a third party tool gfxCardStatus which shows the apps blocking low-power GPU selection and also allows forcing a particular GPU manually. 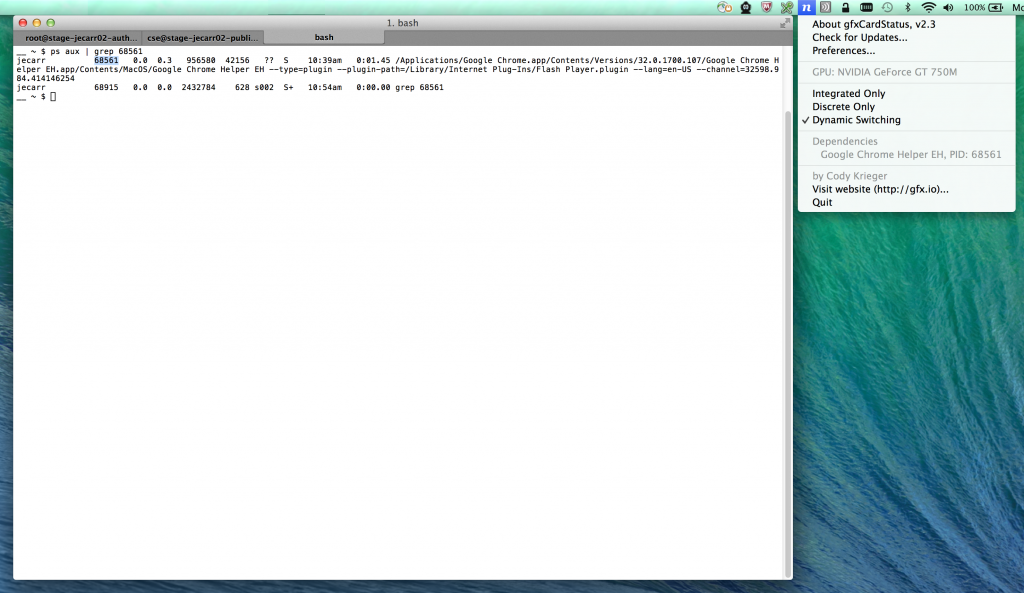 Not content with hogging CPU, Flash Player found itself wanting to hog GPU as well.

The other issue with the dual GPU design, is that it makes running GNU/Linux on these models of Macbook complex – it can be done, but you have to use MacOS to select one GPU or another before then booting into GNU/Linux and sticking with that selected GPU.

This may get better overtime, but it’s worth anyone who’s considering ditching MacOS to keep in mind.