When I recently rebuilt my laptop, I switched back from Google’s Chromium browser to instead use Mozilla Firefox. Whilst I really liked Chromium, there were a few specific reasons which push me more towards Firefox:

This last one is of particular interest to me – Firefox Sync is a feature which allows all your Firefox instances to synchronise data between themselves, using a freely provided public server or your own server.

I think this is one of the most compelling user feature improvements since they released version 1.5 IMHO – the ability to synchronise my bookmarks, credentials, history and best of all, open tabs lists, allows me to effortlessly have multiple devices for browsing without dealing with the frustrating issue of the bookmark or saved password being on the other machine.

For example, I setup a Firefox instance on my Linux laptop, Windows VM and my phone and could see all the tabs between them: 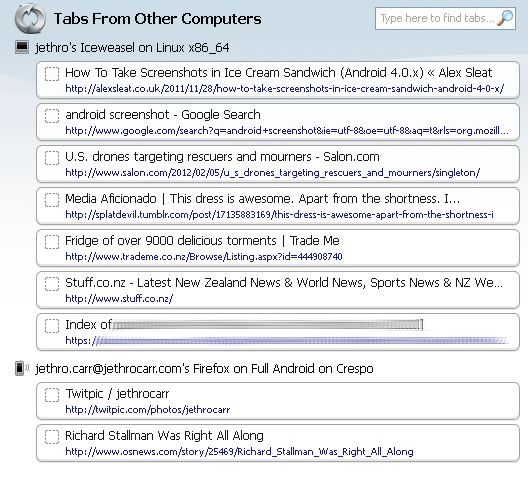 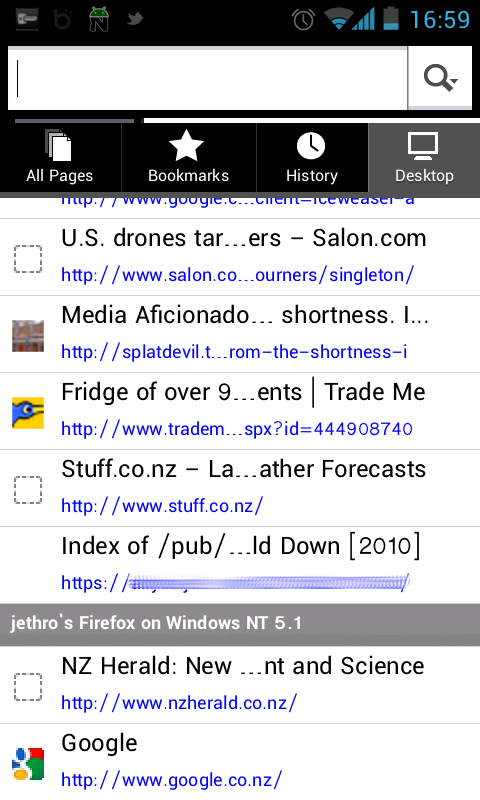 Tabs from Firefox on Android's POV

I’ve found this tab synchronization to be one of the most useful features, it makes it so much easier to find an article I was in the process of reading to finish whilst I have free time when traveling.

If you’re one of those people with multiple devices (desktops, laptops, work machine, personal machine, tablets, phones, etc) it makes life so much simpler. And as long as you have Firefox 4+, it ships as a native feature.

For details about using Firefox Sync and how it works see Mozilla’s details on the service and/or read the getting started with Firefox Sync FAQ.

As you probably know if you ever read my blog, I’m pretty keen on using an entirely open source stack – and so Firefox Sync is naturally fully open source, including both the client (Firefox) and the server components.

This lack of an open source server kills Chromium for me, since the Chrome sync relies on your Google Account and their servers. :-(

Using Mozilla’s open source sync server isn’t as easy as I’d like it to be… building a working server from their source code and limited documentation is a bit of a mission, particularly when some documentation is outdated and doesn’t apply to the latest commit, or when troubleshooting documentation barely exists.

However I’ve managed to successfully package RPMs against CentOS 5 for sync server and dependencies and am currently running further tests before I release them. Ideally I’ll make some time to build them against CentOS 6 as well (done them against CentOS 5 first, since that’s my current production host OS of choice – also the hardest since the version of python it ships with is too old).

With support for SQLite, LDAP, MySQL and Memcache it’s quite flexible and designed to scale to the huge user volumes that Mozilla undoubtedly have – I’ve been running tests with SQLite, but will be having a play with MySQL and OpenLDAP over the next few days as it would be nice to align it to my existing LDAP server.

Expect another blog post later this week with details on how to obtain the RPM packages, along with instructions on setting up your own sync server. It only took me about 3 days full effort of packaging weird python dependencies and getting a working set of configuration and spec files for the sync server to make this stuff work, so hopefully someone is actually interested!