I’m finding an increasing number of friends and people using services like Tumblr or Google Plus as blogging services, or at least as a place to make posts that are more detailed an indepth than typical micro-blogging (aka Twitter/Facebook).

The problem with both these services, is that they deny interaction from external users who aren’t registered with their service.

This has not been the case with social networks to date – platforms like Twitter or Facebook require a user to be logged in, in order to communicate with others – however this tends to work OK, since they’re mostly used for person-to-person messages and broadcasting, rather than detailed posts you will sent to users outside of those networks (after all 140 char tweets aren’t exactly where you’ll debate things of key meaning).

The real issue starts with half-blog, half-microblog services such as Tumblr and Google Plus, which users have started to use for anything from cat pictures to detailed Linux kernel posts, turning these tools into de-facto blogging platforms, but without the freedom for outsiders to post comments and engage in conversation.

Tumblr is one of the worst networks, as it’s very much designed as a glorified replacement for chain email forwards – you post some text or some pictures and all your friends “reblog” your page if they like it and users all pat themselves on their back at how witty and original they all are. 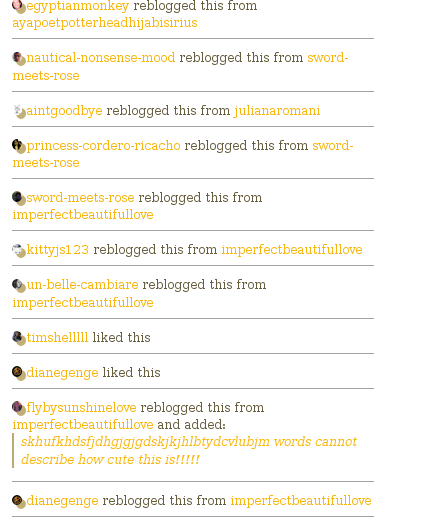 Yo dawg, we heard you like to reblog your reblogging.

The issue is that more people are starting to use it for more than just funny cat pictures and treat it as a replacement to blogging, which makes for a terrible time engaging with anyone. I have friends who use the service to post updates about their lives, but I can’t engage back – makes me feel like some kind of outcast stalker peering through the windows at them.

And even if I was on Tumblr, I’d actually want to be able to comment on things without reblogging them – nobody else cares if Jane had a baby, but I’d like to say “Congrats Jane, you look a lot less fat now the fork()ed process is out” to let my friend know I care.

Considering most Tumblr users are going to use Facebook or Twitter as well, they might as well use the image and short statement posting features of those networks and instead use an actual blog for actual content. Really the fault is due to PEBKAC – users using a bad service in the wrong way.

Google Plus is a bit better than Tumblr, in the respect that it actually has expected functionality like posts you can comment on, however it lacks the ability for outsiders to post comments and engage with the author – Google has been pretty persistent with trying to get people to sign up for an account, so it’s to be expected somewhat.

I’ve seen a lot of uptake with Google Plus by developers and geeks, seemingly because they don’t want the commitment of actually using a blog for detailed posts, but want somewhere to post lengthy bits of test.

Linus Torvalds is one particular user whom I might want to follow on Google Plus, but there’s not even RSS if you wanted to get updates on new posts! (To get RSS, you’d have to use external thirdparty services).

Tumblr at least has RSS so I can still use it in my reader like everything else, even if I can’t reply to the author…. 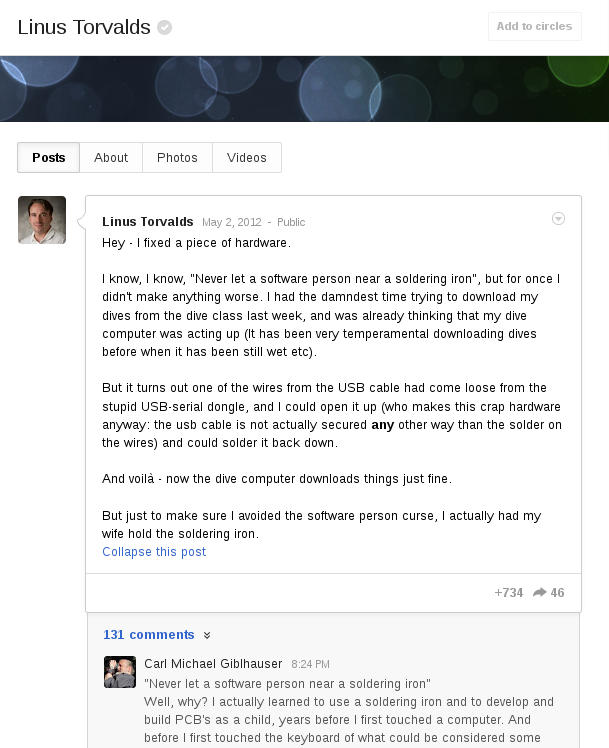 And of course with no ability for posting comments by outsiders, I can’t post Linus comments requesting his hand in marriage after merging a kernel bug fix for my laptop. :-(

So with all these issues, why are users adopting these services? After all, there are thousands of free blogging services, several well known and very good ones, all better technical options.

I think it’s a combination of issues:

In my opinion the biggest issue is the communication, notification and interaction issue as noted above. I don’t believe we can fix the cultural side of users such as the crap they post or the inability to actually make the effort to read their RSS but we can go someway towards improving the technology to reduce/eliminate some of the pain points, to encourage use of the services.

There have been some attempts to address these issues already:

But it’s not good enough yet – what I’d actually like to see would be:

My hope is that with these upgrades, blogging platforms will extend themselves to be better placed for holding up against social networking sites, making it easier to have detailed conversations and long running threads with readers and authors.

Moving to a new generation communication platform build around the existing blogging platforms would be as much of an improvement for real time social responsiveness as shifting from email to Twitter and hopefully, the uptake in real time communications will bring more users back to decentralised, open and varied platforms.

I’m tempted to give this a go by building a WordPress plugin to provide unified notifications using XMPP / Email / Social Media, but it’ll depend on time (lol who has that??) and I haven’t done much with WordPress’s codebase before. If you know of something existing, I would certainly be interested to read about it and I’ll be taking a look at options to build upon.