With companies in Australia offering 1TB plans, us New Zealanders have been getting pretty jealous of only having 100GB plans for the same money.

Except that a couple days ago, my ISP Snap! upgraded everyone’s data allowance by at least 4x…. taking me from a 105GB plan to a 555GB monthly plan at no additional change.

Was a great surprise when I logged into my account, having only previously skimmed the announcement email which went into the mental TL;DR basket. 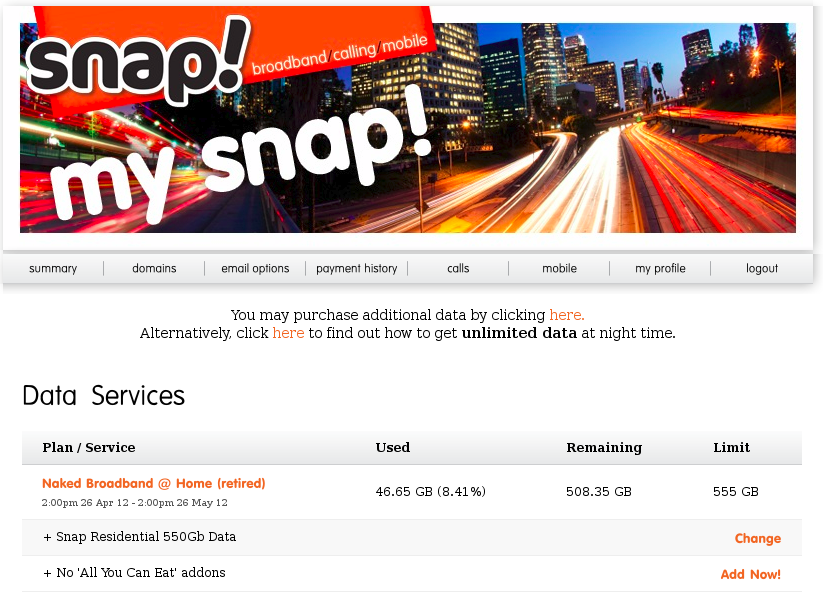 I’m currently paying around $120-130 per month for half a terrabyte on a naked DSL line and to quote 4chan, it “feels good man”.

Of course it’s only DSL speed – although if I was planning to stick around long term at my apartment, I’d look into VDSL options which are available in some parts of NZ. And the first Ultra Fast Broadband fibre is starting to get laid in NZ so the future is bright.

For me personally, once I have 10mbit or so, the speed becomes less important, what is important is the latency and the amount of data allocated.

I suspect snap!’s move is in response to other mid sized providers providing new plans such as Slingshot’s $90 “unlimited” plan, or Orcon offering up to 1TB for $200 per month on their new Genius service.

TelstraClear is going to need to up their game, for the same price for my half terrabyte, I can only get 100GB of data – although supposedly at 100mbits/10mbits speeds (theoretically, since when they previously offered the 25mbit plan I couldn’t get anywhere near that speed to two different NZ data centers…)

Even with it’s faults, TelstraClear’s cable network still blows away DSL for latency and performance if you’re lucky enough to be in the right regions – they should press this advantage, bring the data caps up to match competition and push the speed advantage to secure customers.

Meanwhile Telecom NZ still offers internet plans with 2GB data caps and for more than I’m paying for 555GB, I’d get only 100GB. Not the great deal around guys… :-/ (yes I realize that includes a phone, that has no value to me as a mid-twenties landline-hating, cellphone-loving individual).

7 Responses to Half a Terrabyte