I got my car back from the repair shop on Friday following it’s run in with the less pleasant residents of Auckland, with all the ignition and dash repaired.

Unfortunately the whole incident costs me at least $500 in excess payments, not to mention future impacts to my insurance premiums, so I’m not exactly a happy camper, even though I had full insurance.

Because I really don’t want to have to pay another $500 excess when the next muppet tries to break into it, I decided to spend the money to get an alarm installed, to deter anyone trying to break in again – going to all the effort to silence an alarm for a 1997 Toyota Starlet really won’t be worth the effort, sending them on to another easier target.

(I did consider some of those fake stickers and a blinky LED, but a real alarm does mean that if you hit the car, you’ll quickly get a chirp confirming there is an alarm present. Plus I get one of those chirpy remote controls to unlook the doors! :-D)

I do really hate car alarms, but it’s worth it to have something that will send anyone messing with my car running before it wakes up half the apartment complex.

I wanted to get a decent alarm installed properly and ended up getting referred to Mike & Lance at www.carstereoinstall.co.nz who do onsite visits to install which was really handy, and totally worth it after seeing all the effort needed to do the installation. 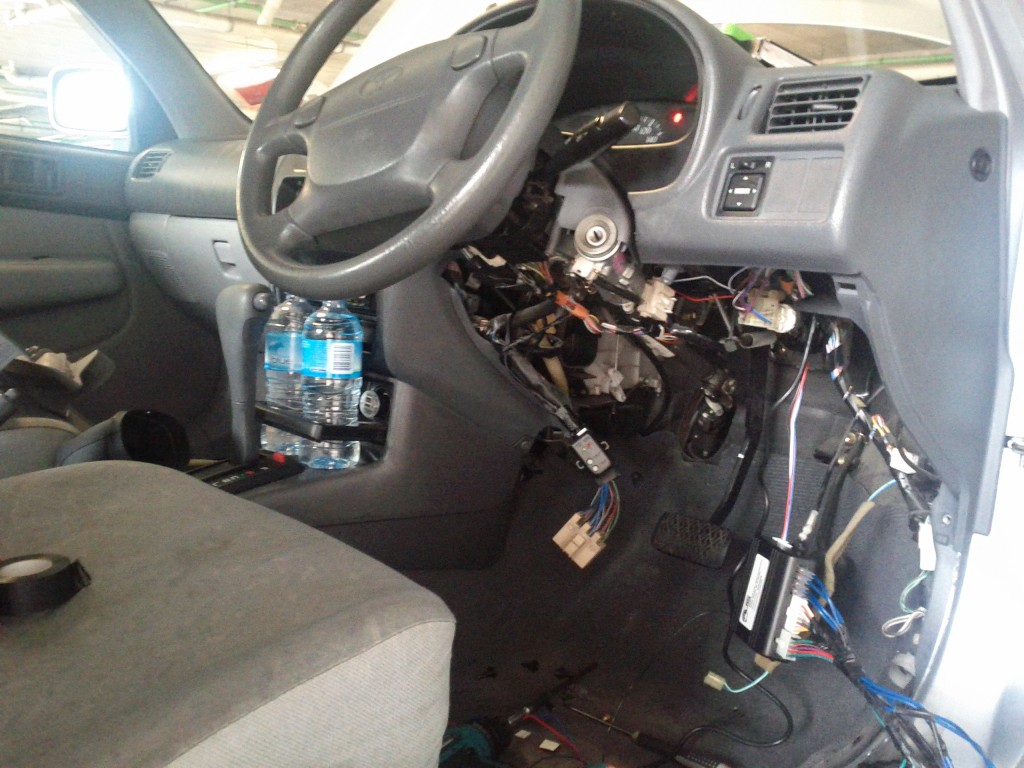 Car electronics spaghetti! Considering this is a pretty basic 1997 car, I'd hate to think what the newer ones are like...

There’s a bit of metal drilling, cable running, soldering, un-assembling parts of the car’s interior and trying to figure out which cables control which features of the car, all up it took two guys about 2 hours to complete.

Cost about $325 for the alarm and labor, plus an extra $40 as they had to run wires and install switches for the boot, which is pretty good when you consider it’s a 4 man hour job, would have taken all day if I’d done it at noob pace.

Would recommend these guys if you’re in Auckland. As an extra bonus, Mike turned out to be an ex-IT telco guy so we had some interesting chats – NZ is such a small world at times :-/

This entry was posted in Uncategorized and tagged alarm, auckland, car, security. Bookmark the permalink.

2 Responses to Pimping my ride with high pitch painful sounds