A tale of two route controllers

Ever since I built a Linux 3.2.0 kernel for my Debian Stable laptop to take advantage of some of the newer kernel features, I have been experiencing occasional short periods of disconnect/reconnect on the Wi-Fi network.

This wasn’t happening heaps (maybe a couple times a day), but it was starting to get annoying, so I decided to sort it out properly and do a kernel driver and microcode update for my Intel Centrino Wireless-N 1000 card.

The firmware/microcode update was easy enough, simply a case of downloading the latest code from Intel and installing into /lib/firmware/ – the kernel driver does the rest, finding it and loading it into the Wi-Fi card at boot time.

Next step was building a new kernel for my machine, I went through and tuned the module selection very carefully tossing out all the hardware my laptop will never use, as I was getting sick of wasting lots of disk space on the billion+ device modules in Linux these days.

After finding that my initial kernel lacked support for my video card (turns out the Lenovo X201i laptops still use AGP-based i915 cards, I was assuming PCIe) I got a working kernel up and running.

Except that my Wi-Fi stability problem was worse than ever, instead of losing connectivity every few hours, it was now doing so ever few minutes. :-(

The logs weren’t particularly helpful – NetworkManager likes to give reason numbers but I couldn’t easily find a documented explanation of these (but maybe I’m looking in the wrong place).

So I proceeded to debug:

Turns out that the Linux 3.3 kernel and NetworkManager fight over which one is going to control the default route for each router advertised link – the kernel adds one, Network Manager removes and then the kernel gets upset and drops all router advertisements.

In hindsight, I should have spotted it sooner, but I had discarded the RA statement from being related initially as the disconnection often didn’t happen till a minute of two after the log entry occurred – eg:

What’s interesting about this bug, is that at first reading it explains a loss of IPv6 connectivity perfectly – however it doesn’t explain why IPv4 or the Wi-Fi connection itself was impacted.

The reason this happened, is that NetworkManager was set to have IPv6 as a requirement for that connection to be established – in the event of IPv6 not working, NetworkManager would consider the interface to be down, even if IPv4 was up.

There is a good reason for this, that the developers detailed on their (excellently written) blog, explaining that by having NetworkManager check for IPv6, it allows applications to be written smarter to better understand their level of connectivity.

For users of the NetworkManager 0.9 series, there’s a patch already committed which you can grab here and I would expect the next NetworkManager update will have this fix.

If you’re on the NetworkManager 0.8 series, this patch won’t apply cleanly – I might make some time to go and backport it, but you can workaround it for now by using the Ignore method so that NetworkManager does nothing and leaves it up to the Linux kernel in the background to negotiate IPv6 addressing. 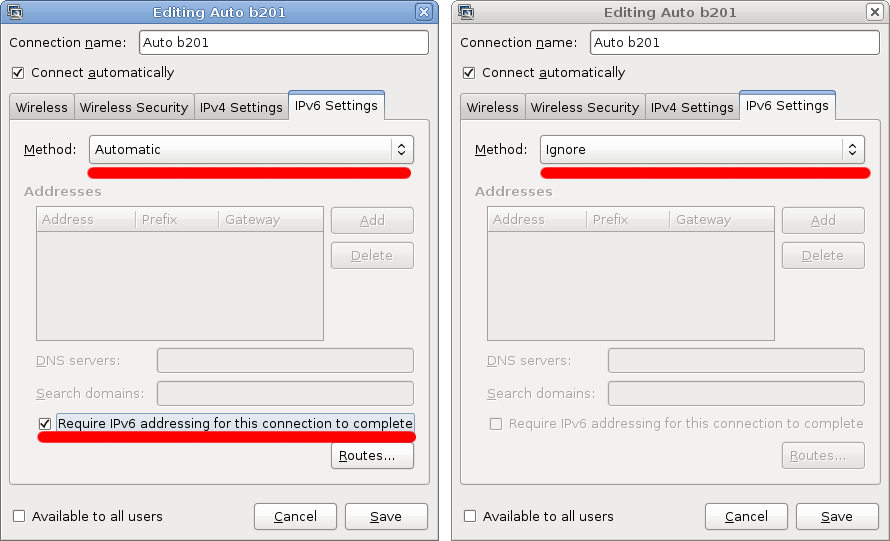 Of course if you’re not connecting to any IPv6 capable networks, you don’t have anything to worry about (other than the fact you’re still stuck in the 20th century).

Initially I was a bit annoyed at NetworkManager for being so silly as to drop the whole interface when just one of the two networking stacks was broken, however after thinking about it for a bit, it does make some sense as to why it chose that behavior – often most interface issues can be fixed by reconnecting – maybe the AP got rebooted, maybe the laptop just moved between two of them, etc – a reconnect can solve many of these.

But a smarter approach, would be to determine whether network issues are layer 2 or layer 3 – if it’s just a layer 3 issue, then there’s little need to drop the Wi-Fi connection itself, instead attempt to re-establish IPv4 or IPv6 connectivity where appropriate, and if unable to do so, use the notifications to tell the user that “IPv6 connectivity is experiencing a problem, some hosts and services may be unreachable”.

It’s actually something that Windows does semi-OK – it figures out roughly how borked a user’s connection is and then does a balloon popup stating that there’s limited connectivity or IP conflict, or some other sometimes helpful message.

This may be better in newer versions of NetworkManager, I’ll have to have a play with a more recent release and see.