Had a bit of a sleep in on my first full day in Melbourne, eventually @MissNickiBee came and looked at me disapprovingly till I got up off the floor.

Start off with coffee and breakfast in a cafe down some side street, before wandering into the city via the streets of Melbourne.

I love all the old buildings and how much historical feel that Melbourne has – despite being an uber geek, I appreciate the older architecture and tend to find that it’s more interesting than many modern constructions. 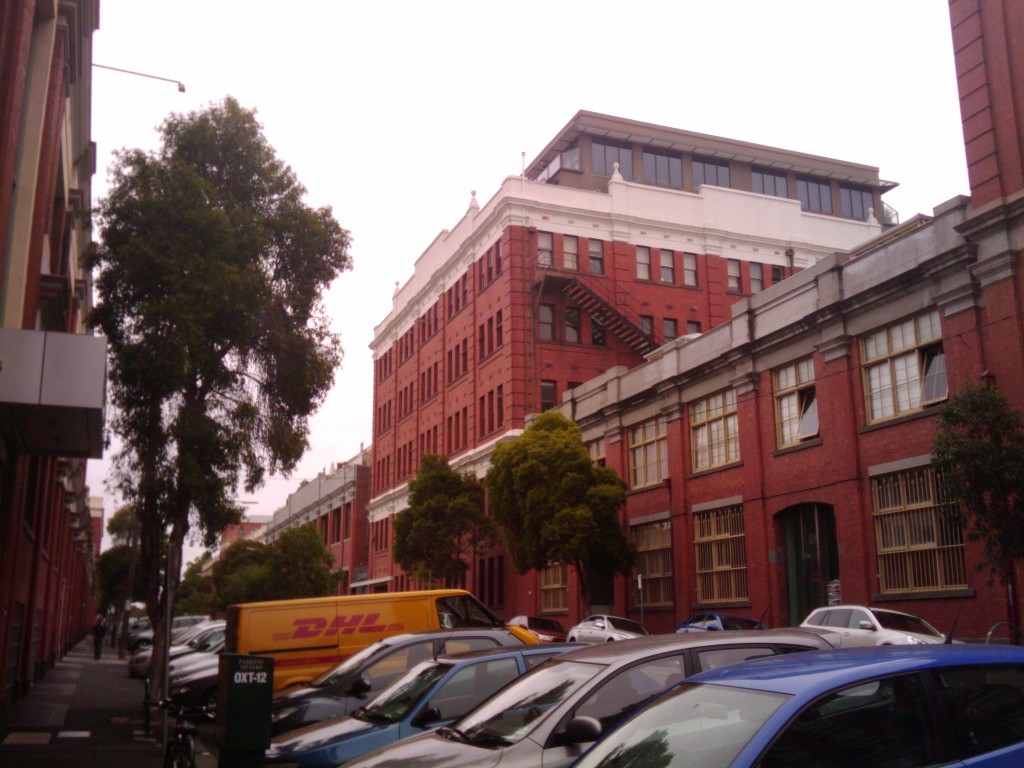 Large brick constructions - wouldn't survive in welly with all our quakes! ;-) Ideally I’d like to buy something like a 1900ish villa for myself, and renovate so it has modern ethernet, power, bathroom, kitchen, etc inside, yet still retain the classic hard wooden feel.

Of course in Wellington this wouldn’t be cheap, so clearly I need to marry rich/moonlight as cougarbait/sell hacks to dodgy types/something to boost my salary to support the half a million price tag. Or stop buying computer kit for a bit :-/

Unfortunately I didn’t take any pictures of the cute Melbourne houses, but they look amazing with their iron trellises and cute picturesque gardens. Of course, Melbourne has large modern towers as well :-) 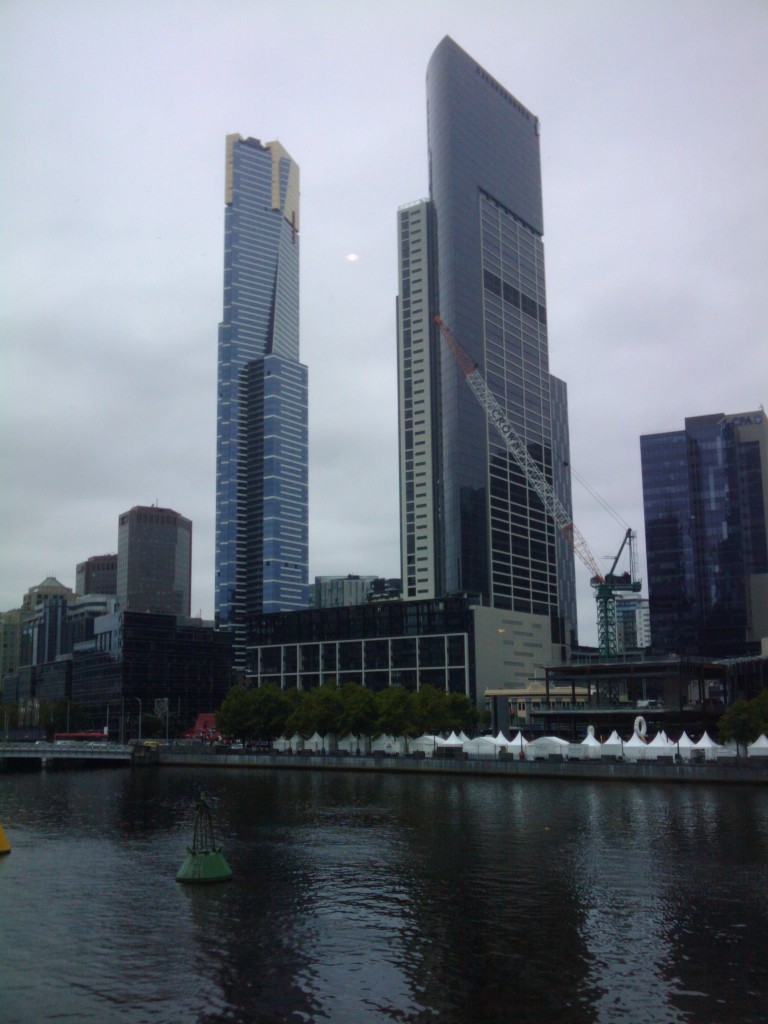 Our first proper stop was the Melbourne Aquarium, @MissNickiBee had some discount tickets which helped.

Was an amazing visit, it’s far larger than Kelly Tartans (although they might have more penguins) and lots and lots of detail about different species.

I took a huge number of pics and videos that I’ll have to upload at some stage, for now here’s some penguins, since penguins are awesome: Aside from penguins, they had a huge number of different fish, sharks, jellyfish, stingrays and many other fishy critters – well worth the visit, kept us occupied for several hours.

After visiting the aquarium, I headed out to St Kilda with @MissNickiBee for drinks, cake and beach fun. 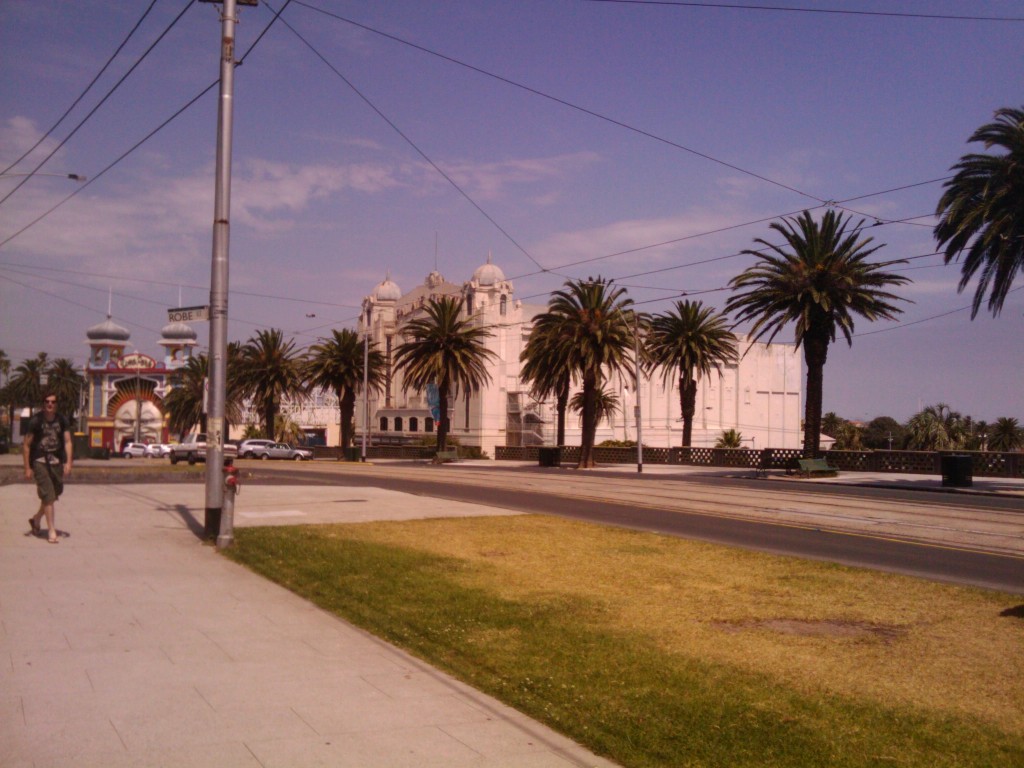 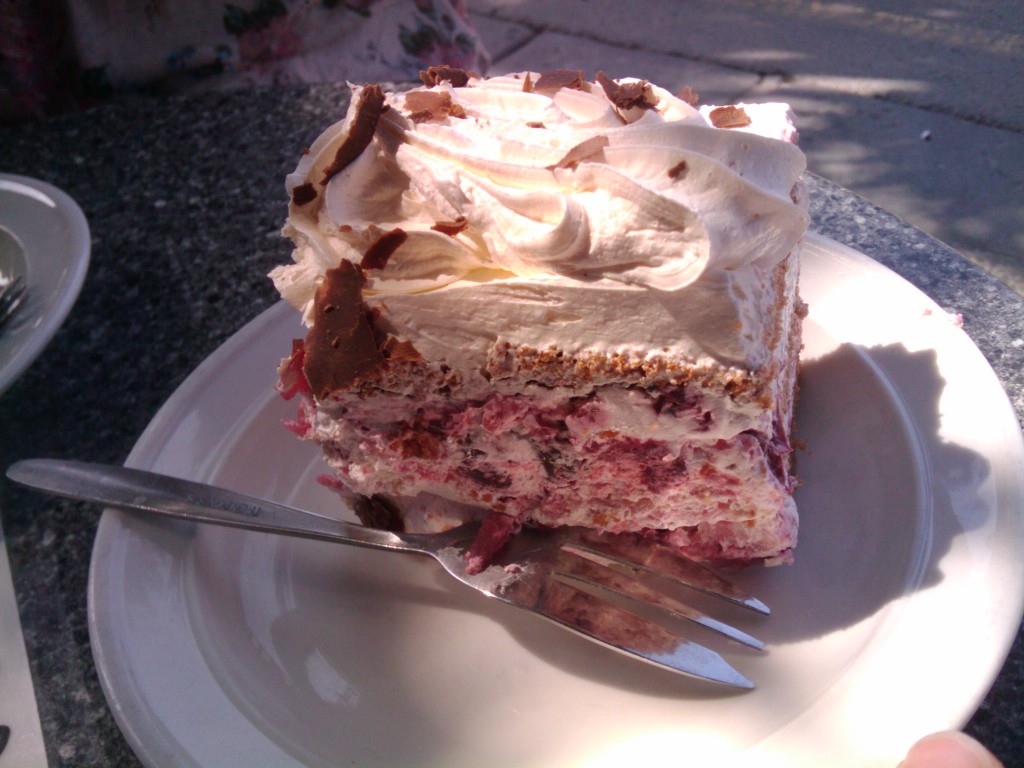 This is cake. It is most delicious.

One of the things I’ve noticed most about Melbourne is that everything is very compact – there’s a huge amount of people, traffic, trams, etc all trying to fit into tight streets – it’s not uncommon for people to be squeezing into trams, randomly joining you at your cafe table since there’s no free ones and for trams to be whizzing by closely through tight gaps.

I took a rather bad video when I was out in St Kilda of a tram going by the cake cafe where we were seated which shows just how close they sometimes get.

That’s pretty much my one complaint with Melbourne, there’s a lot less personal space and it can feel a bit dirty and chaotic at times, particularly some of the stations and streets. – especially compared to Brisbane with all it’s huge open spaces!

I guess it’s kind of the problem of trying to fit four million people into the limited space available. :-/ On the plus side, this population means there’s so much selection available for everyone.

After cake, we went wandering along the St Kilda waterfront, probably the only place I’ve seen in Melbourne that’s not squished with a million people running about – although there were certainly a few sunbathers around, even for a business day. 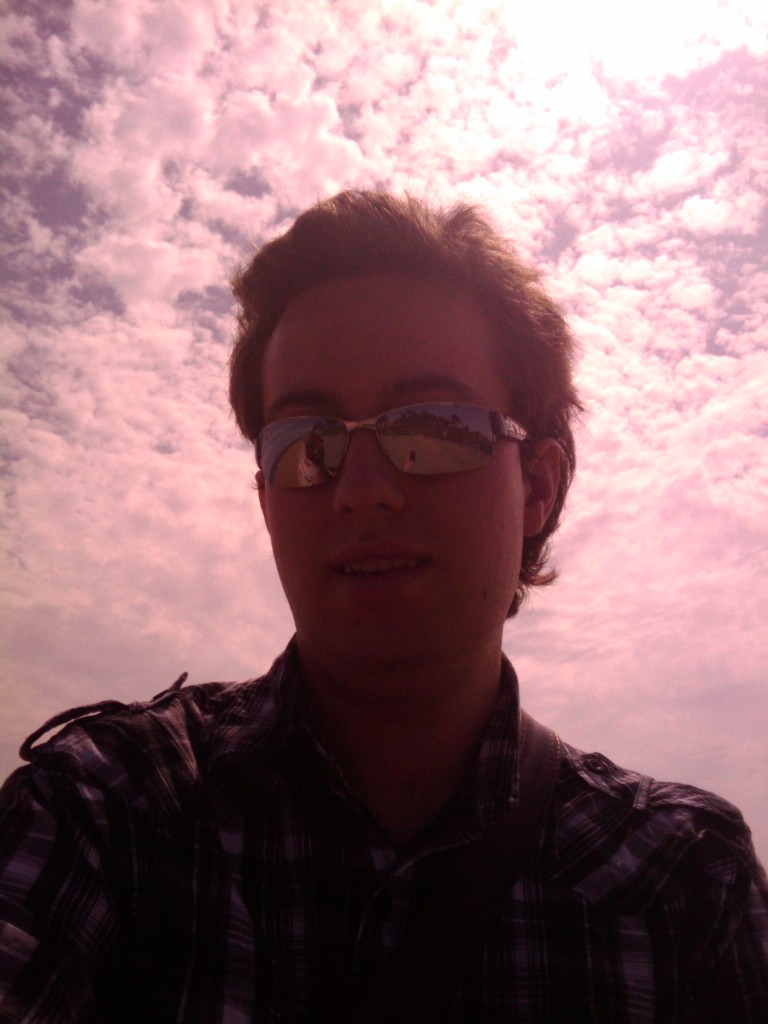 I turn my back on this burning sun! 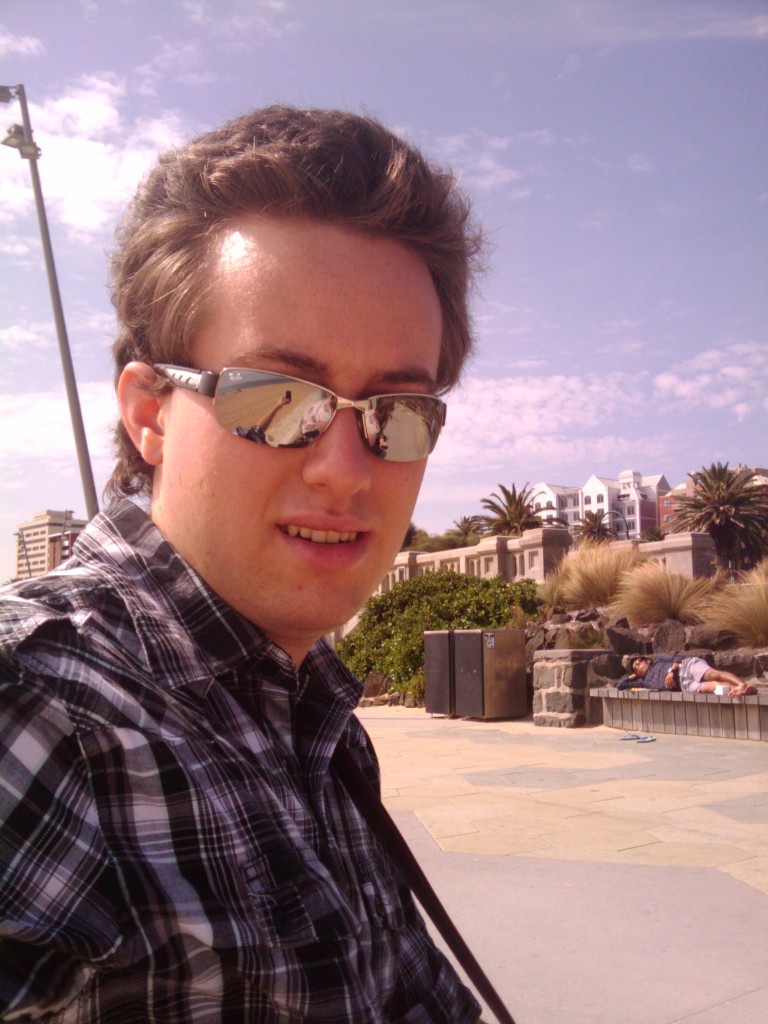 I'm outside. Note my uncomfortable expression at the burning heat. 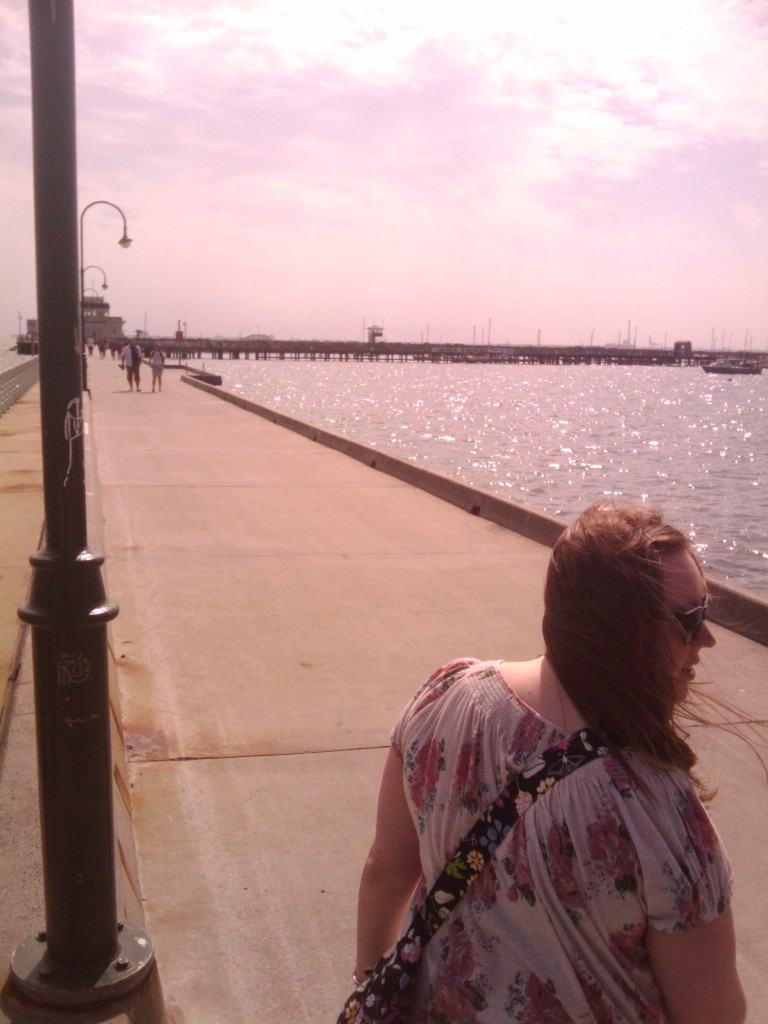 Tour guide leading me out onto a pier, to what I suspect can only be her plan to dump my corpse off into the sea. To wrap up the St Kilda visit, we headed back into the city for dinner – sadly the vegetarian only pizza place was just closing when we arrived (around 21:45) but VegeBar (IIRC) was open and doing a roaring trade.

They managed to find us a table and much delicious vegetarian pizza was consumed – I’d have to go back, there’s a huge menu of awesome sounding vegetarian and vegan foods – they even have a menu for raw vegan diets O_o 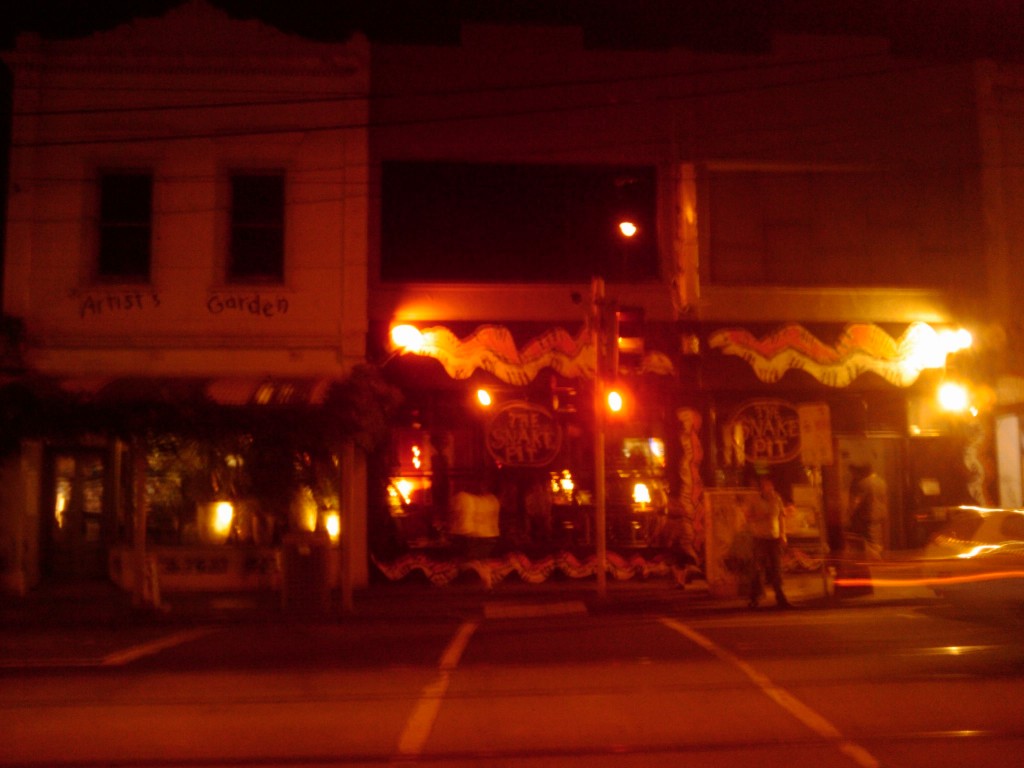 Me attempting to photograph at night.

This entry was posted in Uncategorized and tagged melbourne, vegetarian. Bookmark the permalink.