Work recently upgraded us to the latest MS Office edition for our platform. Most of our staff run MacOS, but we have a handful of Windows users and one dedicated Linux user (guess who?) who received MS Office 2010 for Windows.

I’ve been using MS Office 2007 under Wine for several years, it was never perfect, but about 90% of the functionality worked with some exceptions such as PDF export and certain UI and performance artifacts.

With the 2010 upgrade I decided to instead switch to using Windows under a VM on my laptop to avoid any headaches and to fix the missing features and performance issues experienced running Office under Wine.

Whilst I’m a fan of Xen and KVM, they aren’t so well suited for desktop virtualisation as they’re designed more for server environments and don’t offer some of the more desktop focused features such as seamless integration, video acceleration and easy point & click management interfaces.

Instead I went with VirtualBox thanks to it being mostly open source (open source with exception for a few extensions for USB 2.0 forwarding and network boot) and with a pretty good reputation as a decent VM application.

It also has some of the user-friendly desktop features you’d expect such as being able to forward USB hardware through to guest, mounting any folder on the host as a network share (without needing to setup samba) and 2D/3D video acceleration.

But the real killer feature for me was the seamless windows feature, which allows me to boot the virtual windows desktop and Windows applications alongside my Linux applications smoothly and without the nastiness of an RDP window. 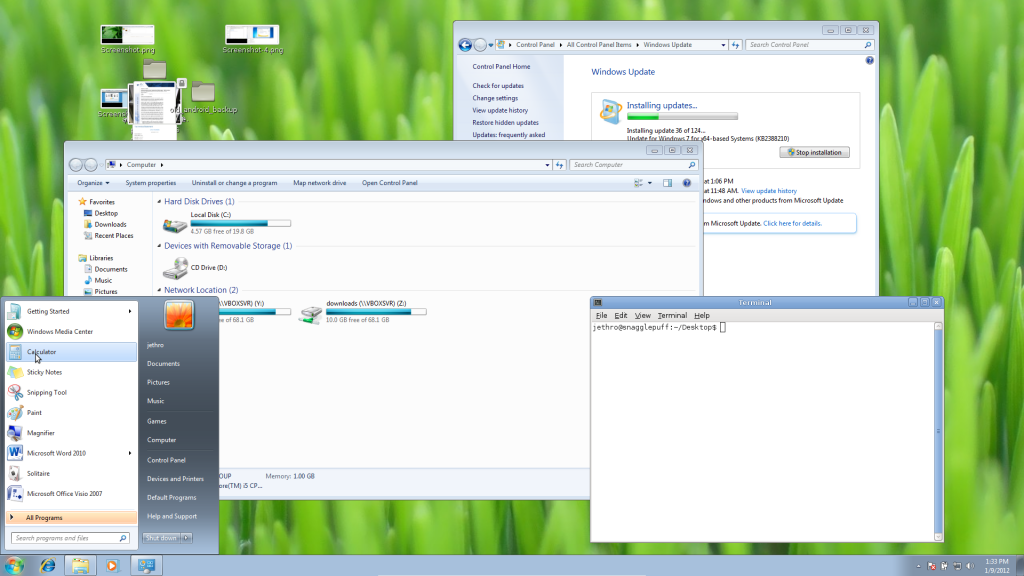 Sadly it’s not quite good enough for you to be able to run the latest Windows games in as the 3D acceleration is quite basic, but it’s magnificent for just about any other non-multimedia application.

The only glitch I found, is that if you have dual screens, you can only run the windows session on one screen at a time, although virtualbox does allow moving the session between monitors whilst running so it’s not too big a deal.

The other annoying issue I had with virtualbox is that it uses image files for storing the guest VMs and it doesn’t appear possible to get it to use an LVM volume instead – so in my case, I waste a bit of space and performance for unnecessary filesystem formatting to store the Windows VM. I guess this is a feature that only a small subset of users would want so it’s not particularly high priority for them to add it.

I’m running Win7 with 2 virtual cores and 1GB of RAM on top of a host with an Intel Core i5 CPU (with hardware virtualisation enabled), 8GB RAM and a Intel 320 series SSD and it’s pretty damn snappy.

As a side note, the seemless window integration also works for Linux-based guests, so you could also do the same ontop of a Windows host, or even Linux-on-Linux if desired.