Whilst I’ve been in Auckland for about 8 months now and driven past it a number of times, I had yet to visit the Auckland Museum Of Transport And Technology (MOTAT). However this month (June) there’s free entry for all visitors, which gave me a pretty compelling reason to head over there and check it out. :-)

Being a free weekend, it was pretty nuts with huge crowds there, but the staff did a great job and once we got in, as long as we avoided the major kids-focused attractions, the crowds weren’t an issue.

And wow, I’m glad I went. It’s actually one of the best things I’ve found in Auckland –  huge range of trams, from Wellington, Auckland and Melbourne, a massive aviation display and a solid number of trains, cars and other displays including Antarctic machines, Kiwiana display, old printing systems and a Victorian village.

Definitely the place to take geeky out-of-towners wanting something to see other than just traffic jams and the sky tower whilst in Auckland. ;-) Seeing how exposed drivers were on early cars are trucks is amazing, it must have been like driving whilst sitting on a park bench…. and no such thing as a seatbelt, or even doors to stop yourself from falling out sometimes :-/

I didn’t get many pictures of the other cars they have, although there’s a big selection of icon cars from the 20th century – quite surprising seeing how big some of the early models were, compared to the compact size of modern vehicles – some of their engines must have been at least 4 times the physical size of my modern 1.3l engine. The mechanical printing press was pretty interesting to watch – the machine has an arm with various suction cups on it, which is used to pickup each sheet of paper and feed it into the print rollers.

The photo doesn’t really do it justice, so I’ve uploaded a youtube video of it in action here, you wouldn’t expect something that looks like such a crude mechanical machine to do such as accurate job of feeding and printing the pages.

Wonder how long until the news paper printing presses of the 2000s era end up in there as well, with the shift to digital it might not be that much longer… 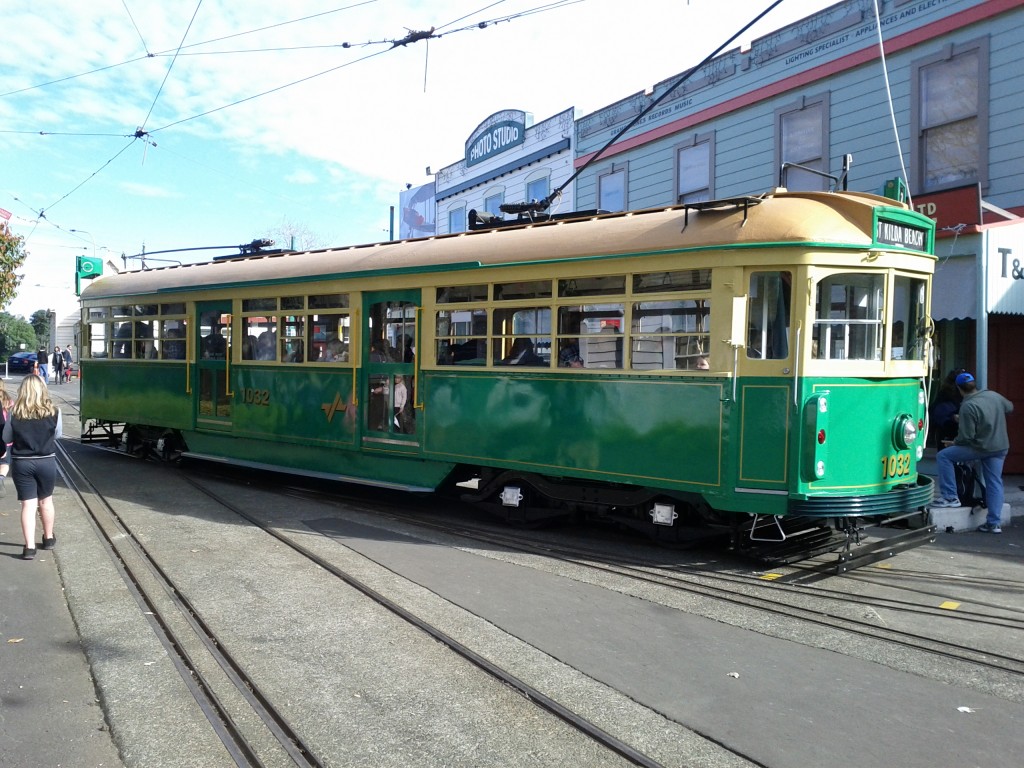 Trams! And a Melbourne tram no less! :-D Steam powered tram - it's effectively an engine only, designed to pull/push tram trailers. Double decker Wellington tram! I wonder how popular the upstairs was on a cold windy Wellington day. :-/ Map of Auckland's tram network - really wish they had kept it, Auckland needs all the public transport it can get. :-/ 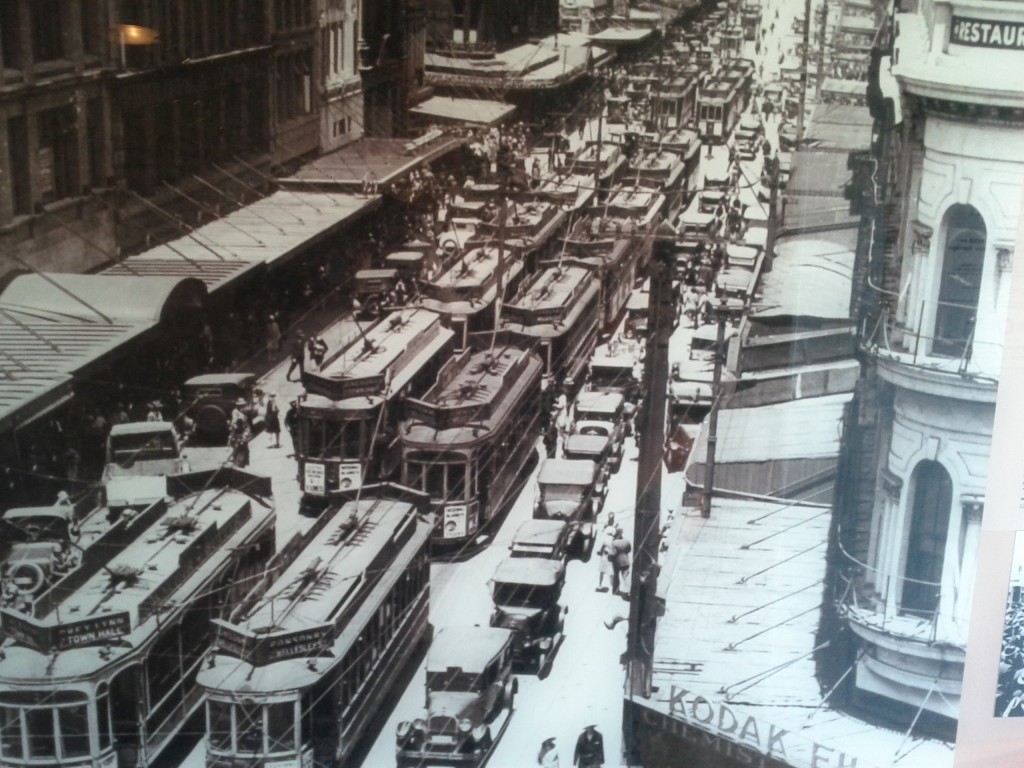 It’s probably pretty clear that I love trams and MOTAT offers a great experience with a large number of them in excellent condition, as well as a number of ongoing restoration projects in the works, including an interesting sounding “freight tram”.

There’s at least a couple Melbourne trams and several trams from Wellington which are in good running condition, not sure about the Auckland ones, but they look pretty good so I presume they may also be in running condition,

What’s really cool is that since MOTAT is split into two sites, they run several trams regularly which you can ride between the two sites, with an in-between station at Auckland Zoo – you get a free return ticket with your MOTAT entrance fee. 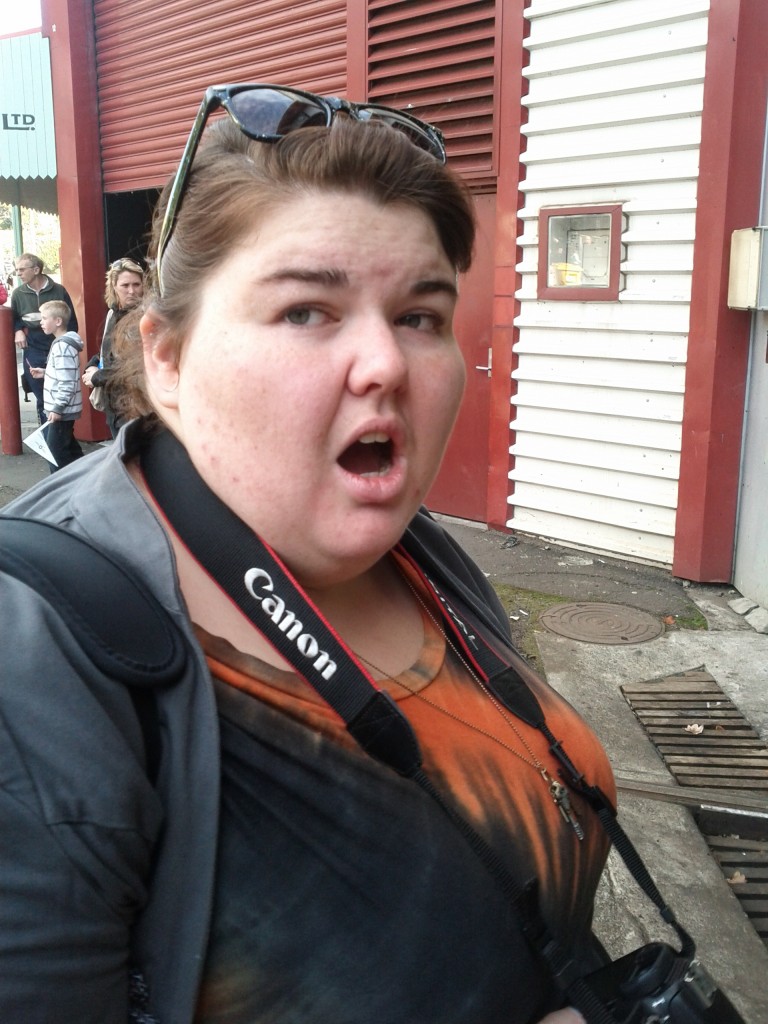 The mini from Goodbye Pork Pie 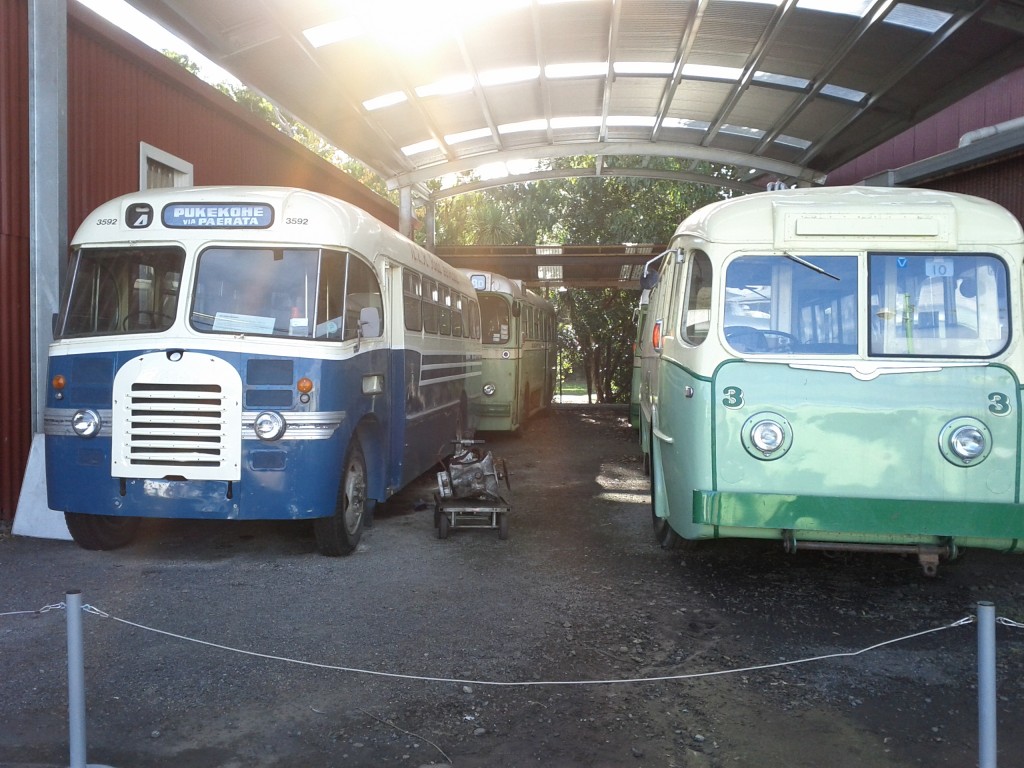 Massive locomotives - would love to see that steam train when it was running! I was fortunate in that I chose to come on the right weekend, as the steam train only runs on select Sundays. Whilst it’s not a long run of track, it’s always a treat to see steam locomotives when running – I took a video and uploaded to youtube of the train running. :-D Tank rides! I didn't get a chance to go on it myself, but looks quite fun. They move surprisingly quickly over the muddy field too Quite neat seeing planes in various stages of assembly in the workshop. 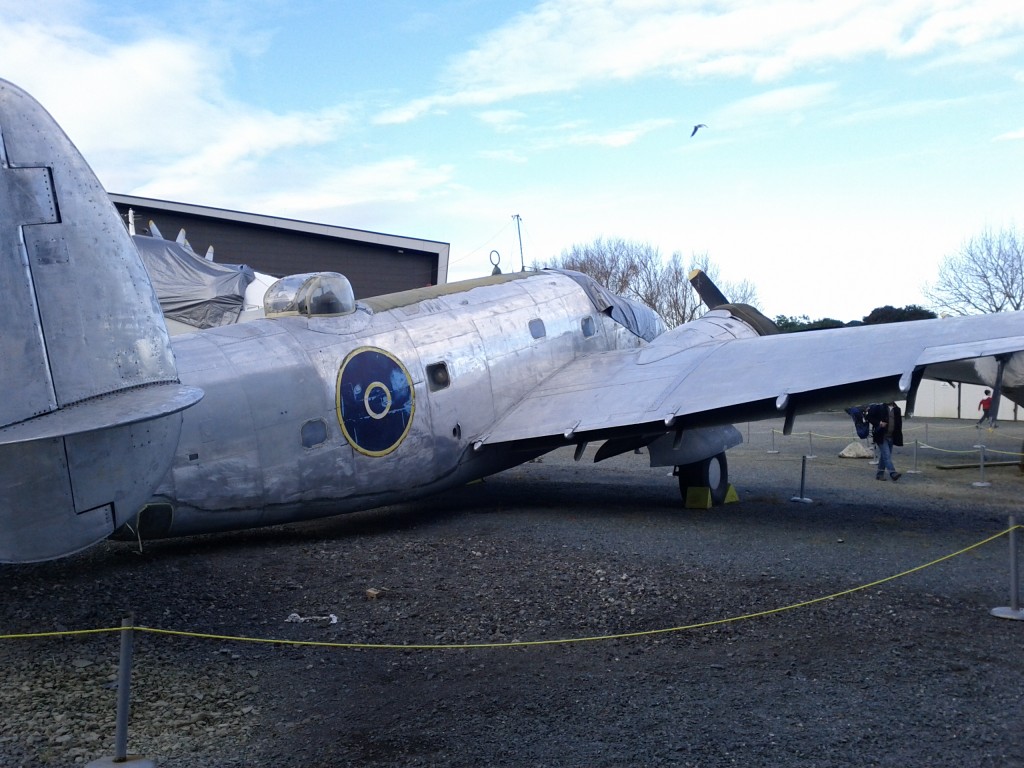 Lots of planes outside in various conditions, many military options, some DC3s and some sea planes. Massive sea plane - size becomes really noticeable when you see the people on the ground near it.... it amazes me that these things actually fly sometimes. 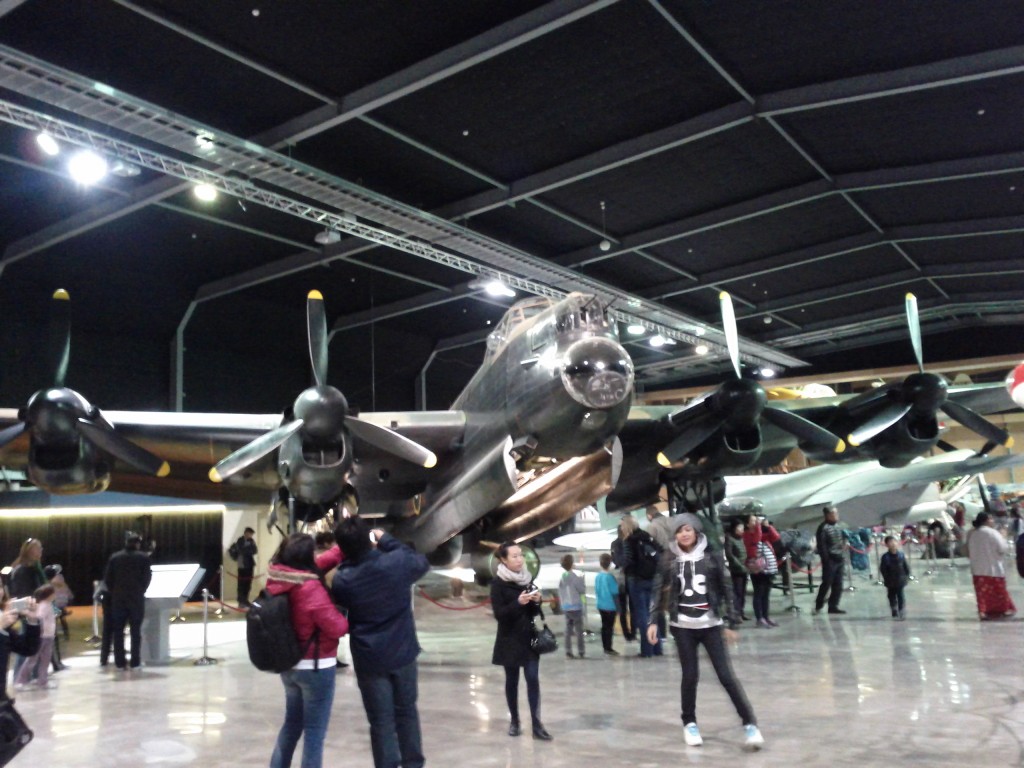 Bombing bay... I wouldn't want to be anywhere near bombs that size when they drop....

The Avro Lancaster is one of the best pieces in the aviation hall – it’s got to be one of the most famous and well known aircraft of the war, but for all the pictures and videos, you don’t really realize how massive the aircraft really is until you get up close to it IRL.

Especially the massive tires, rather than modern designs with groups of numerous smaller tires, the Lancaster has two massive tractor-sized tires that retract up into the wing.

Apparently one of my great grandfathers was on these during WW2, although I’m unsure of his exact position/role onboard. Ah, the NZ skyhawks.... the most action they ever got was firing a warning shot over the bow of an illegal fishing ship, then got to sit in plastic wrap for years until the government decided nobody wanted to buy them, so scrapped them. 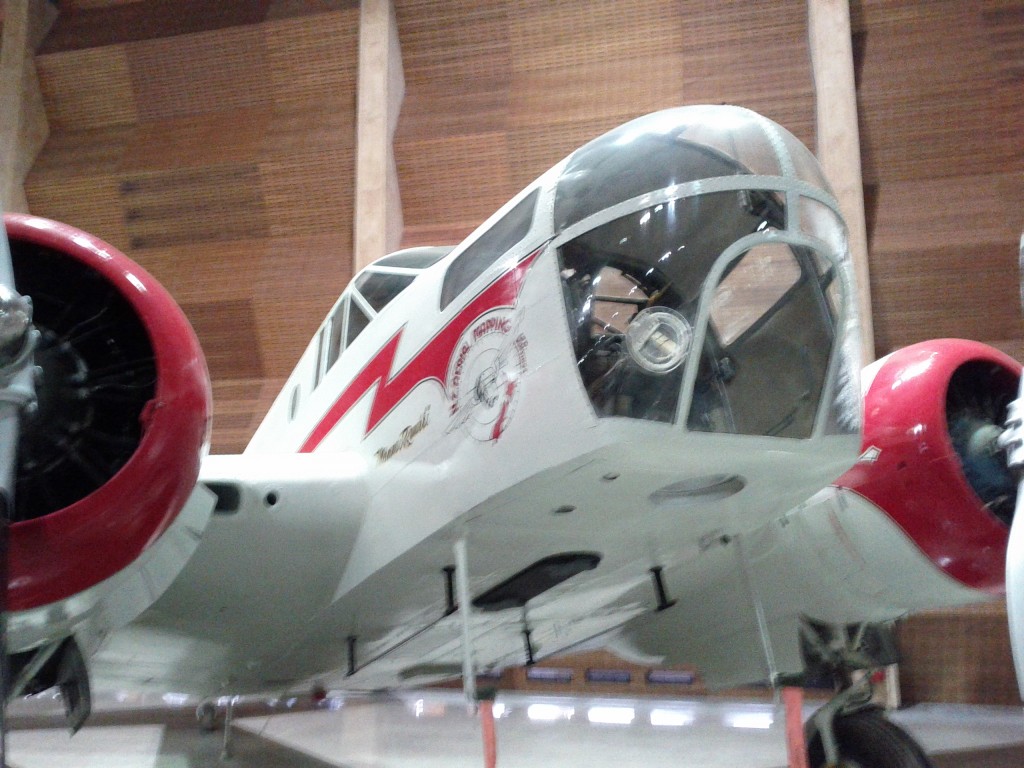 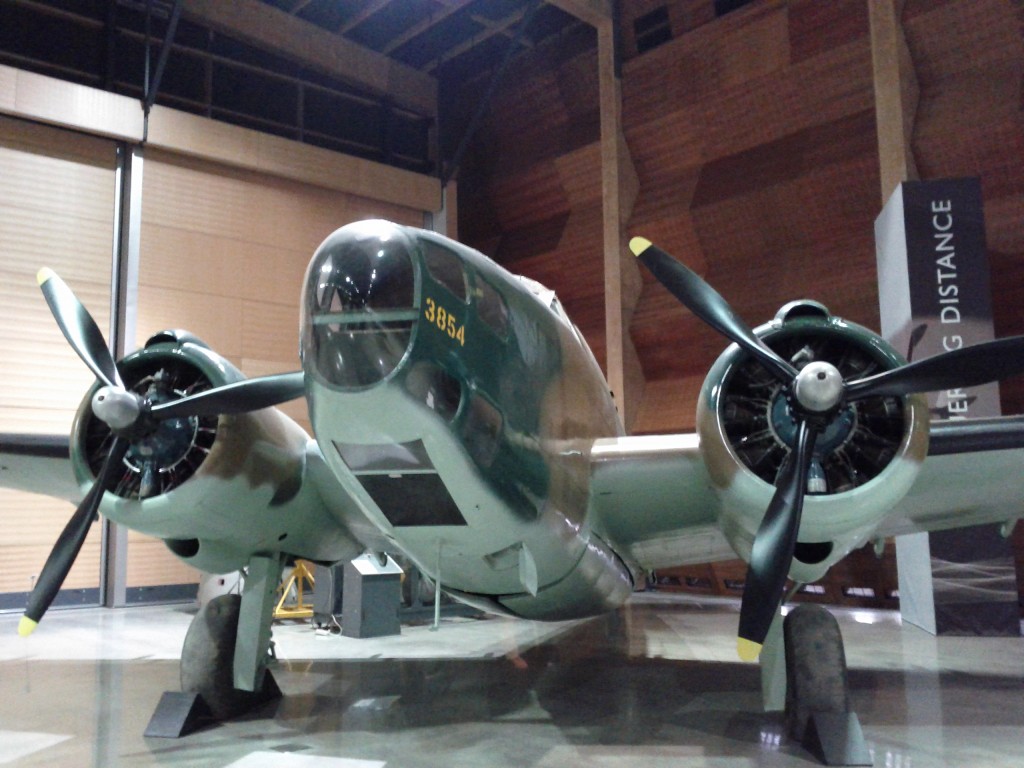 Large number of interesting bombers like this around the hall. 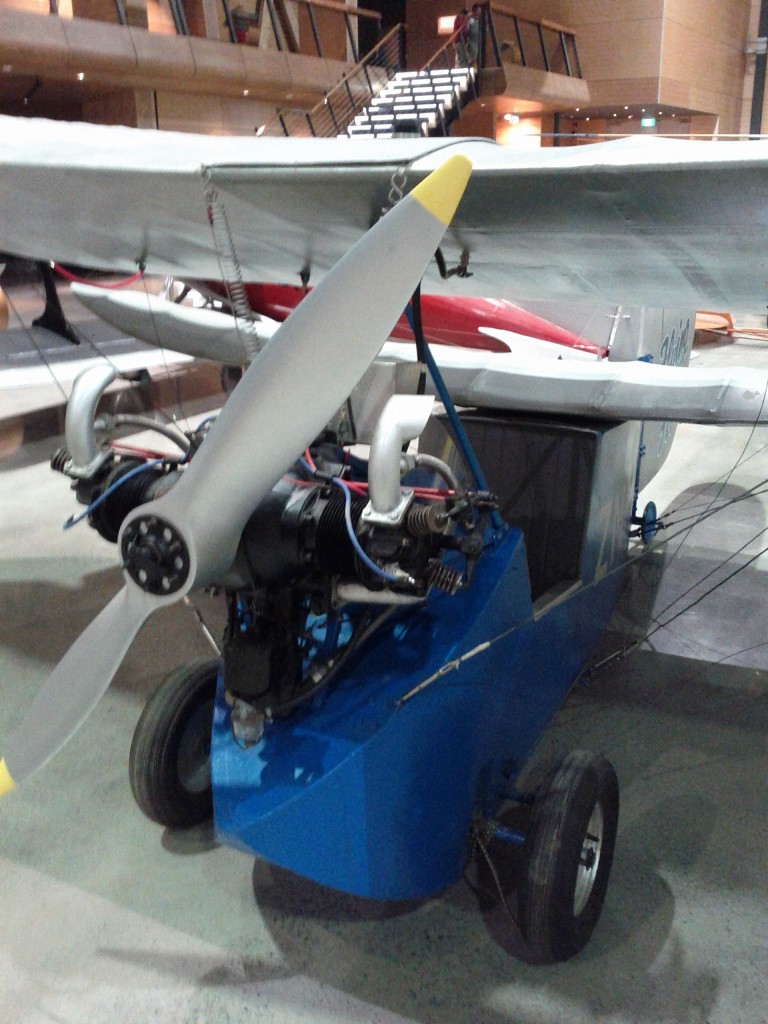 Overall it was a pretty excellent trip – we spent about 3 hours there, but I could have spent maybe 5 or 6 even, if you stopped to do everything and took the time to watch more of the scheduled activities and events.

It’s actually one of the few touristy things that I’d be happy to pay the entrance fee for, at $14 per adult, it’s pretty cheap – especially when compared to other Auckland attractions like Kelly Tartons ($34 per adult, maybe 2hrs activity at most).

It’s easy to get to with a car, there’s an abundance of parking, and there’s also a bus stop right outside if you’re going to brave the Auckland public transport system. :-)