Whilst in Wellington for a weekend a few weeks ago, I went on a walk around Makara with my good friend Tom, only I got a little too distracted to blog it until now.

Makara is a very small rural community near the coastline behind Wellington, only about 30mins drive from the Wellington CBD. Whilst you wouldn’t go there to visit the thriving shopping district or cafe scene (ha!), it is an interesting place for some walks up large hills with amazing views and a slight risk of deadly cliff drops or heart attacks from climbing the steep slopes.

Like most of Wellington, it’s a stony beach so you wouldn’t go there for the soft sand, warm swims and attractive sunbathers, but it does offer a bleakness that is strangely attractive. 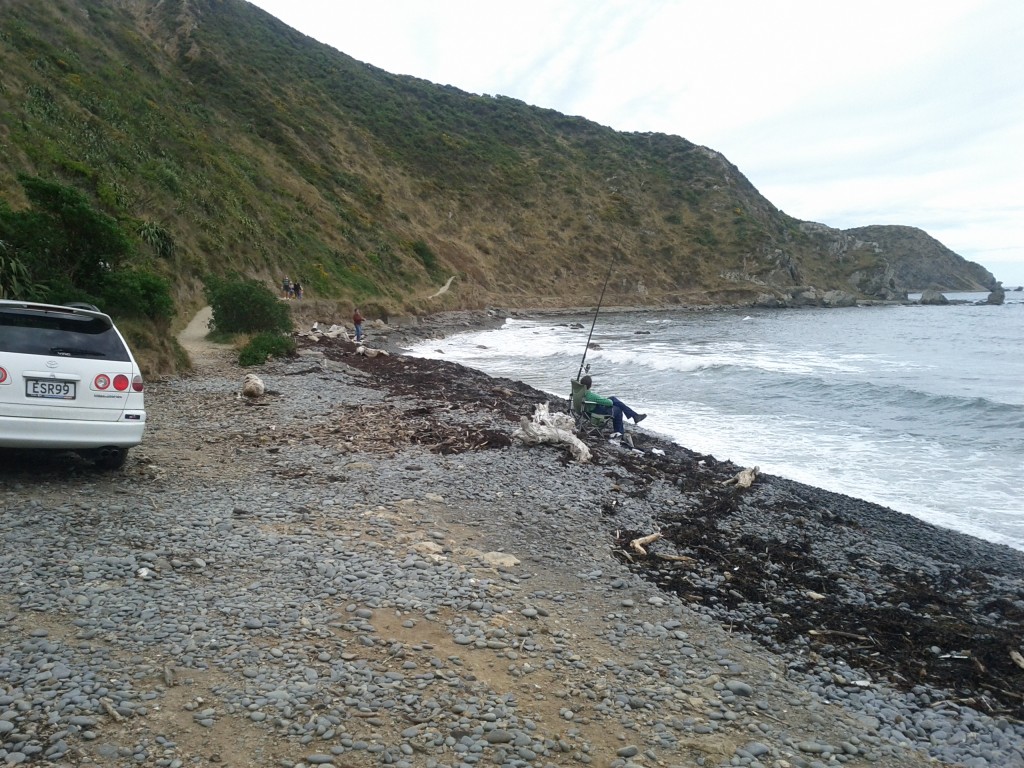 We took the Maraka Walkway which starts off going steeply uphill through some quite undefined tracks (hint: follow the flattened grass paths), before going up to old WW2 gun emplacements, wandering through the windmills and then back along the coastline.

If one desired, there are longer paths that can be be taken right through the wind farms and into other bays. In theory, if you went far enough along the coast, you would end up going around the southern most point of Wellington and reconnecting to civilization at Red Rocks, or even going up to the Brooklyn wind turbine. 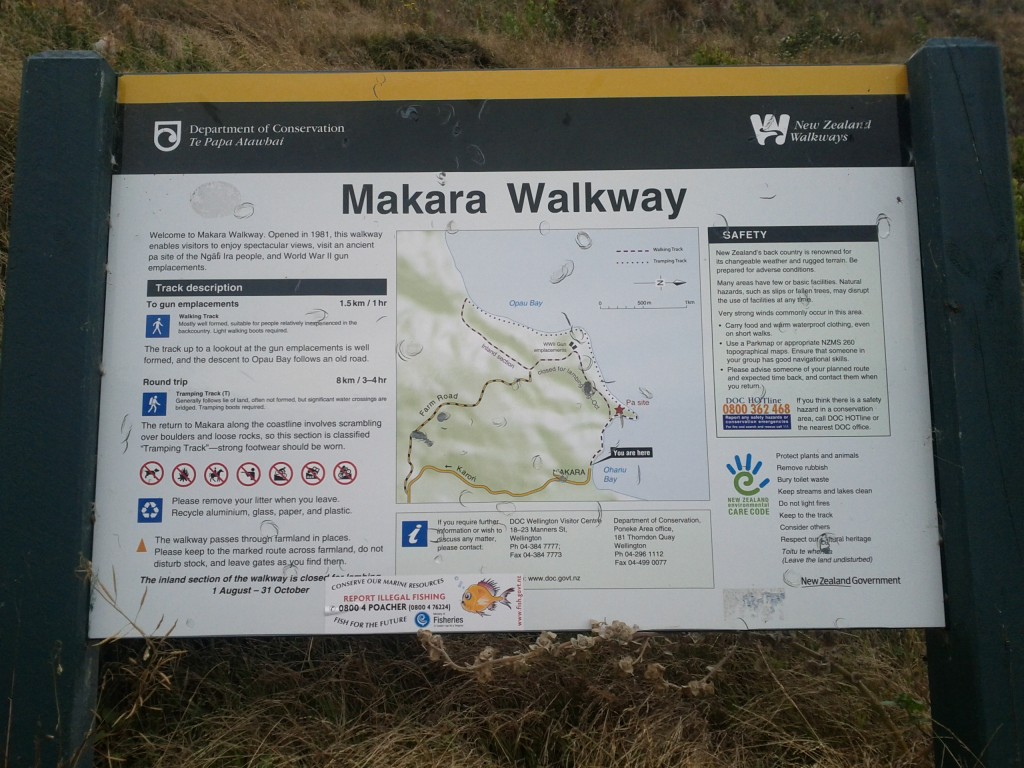 The map doesn't quite give a warning to the steepness, also they weren't kidding with the recommendation for some light walking boots, some of the areas are a bit too muddy and rough for sneakers. 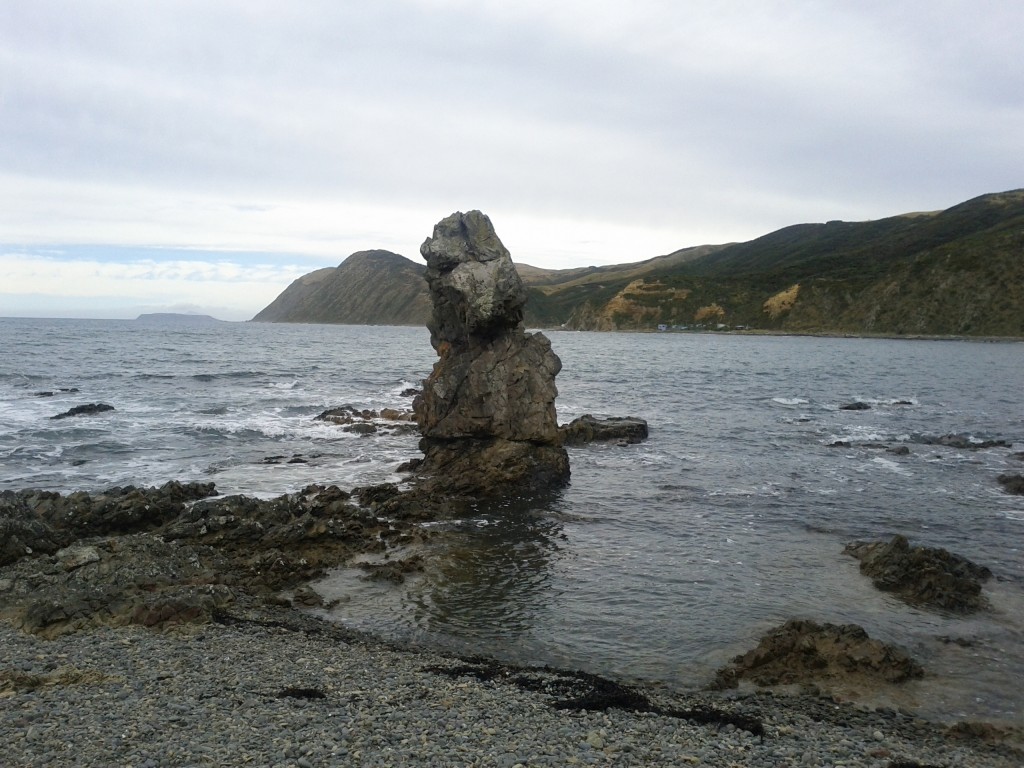 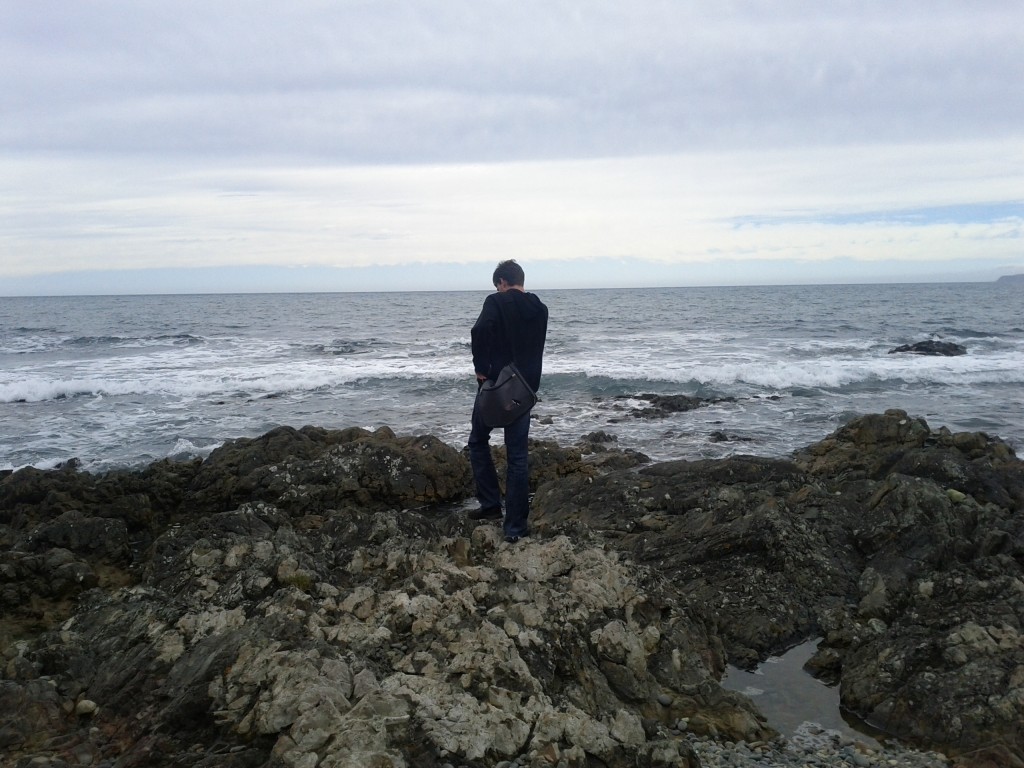 Oh mercieless sea, so strong yet so frail as you fall upon these rocks of land. Ponder thee Tom shall. 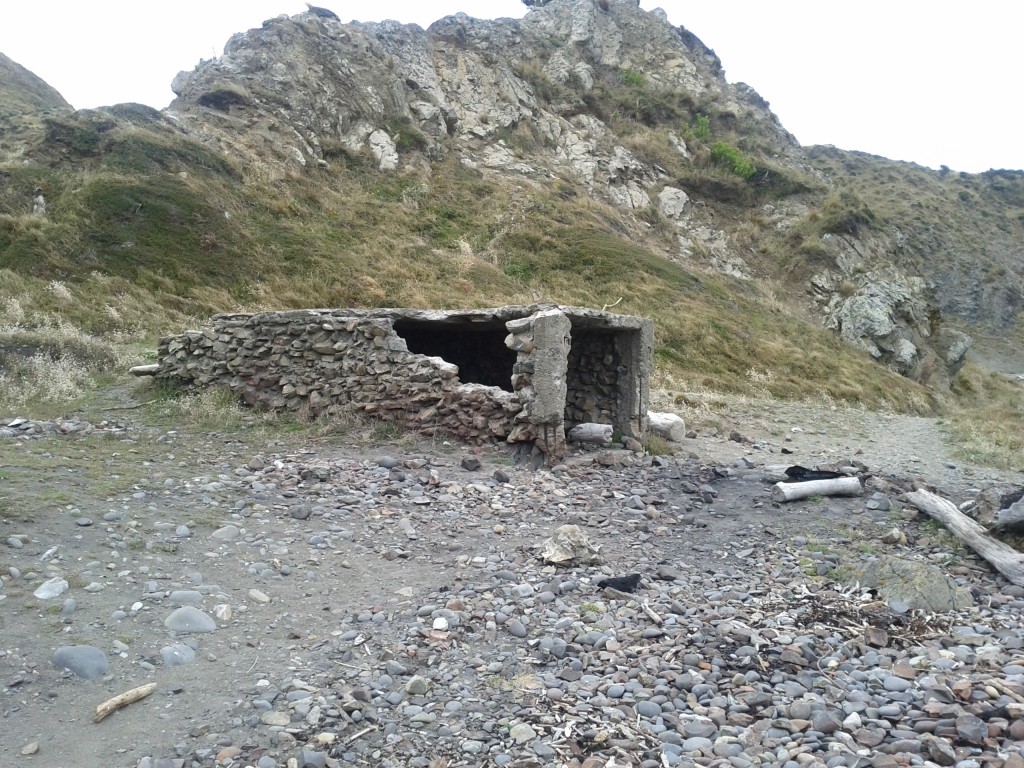 Unsure what this building is - it's in the right area on the map for the Pa site that we couldn't see any other trace of, but it's less than 100 yrs old as it's clearly built of cement and steel and not a Pa... 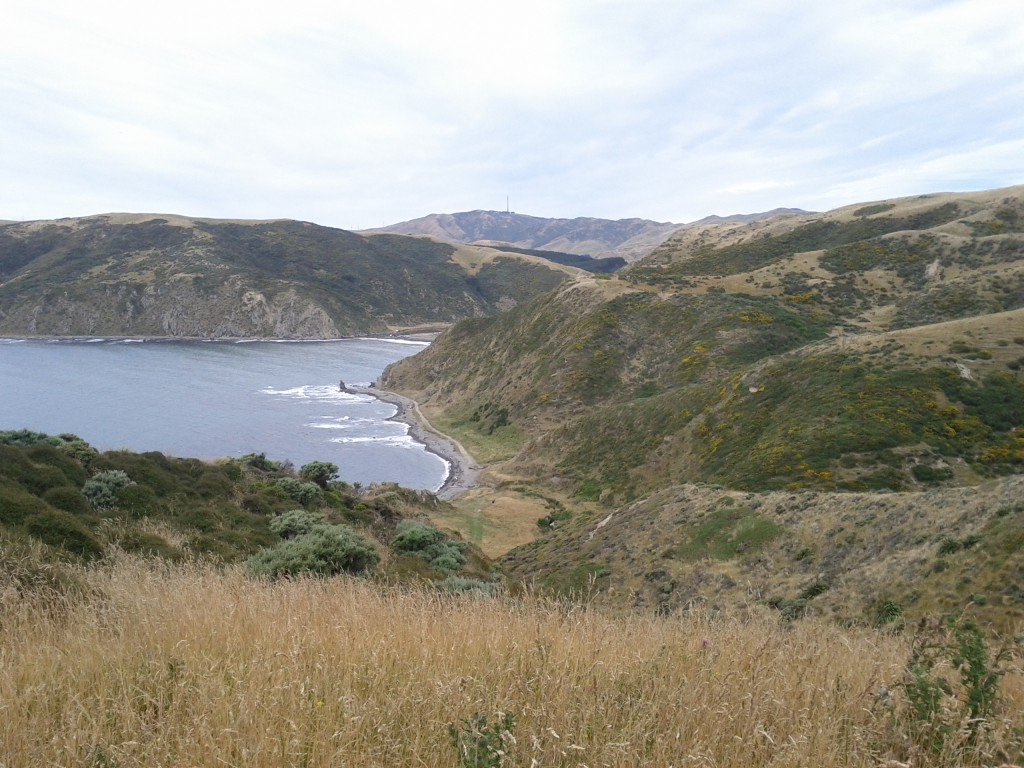 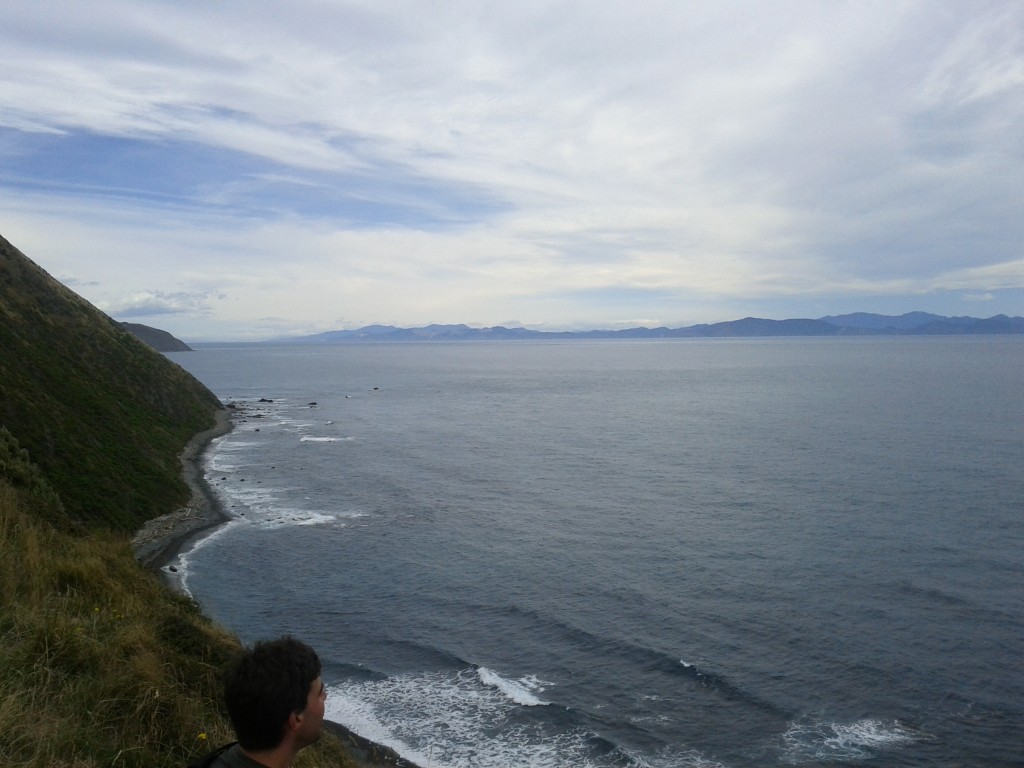 Looking out from a cliff towards the south island The path winds along these pretty steep hills, wouldn't want to go for a tumble down one. 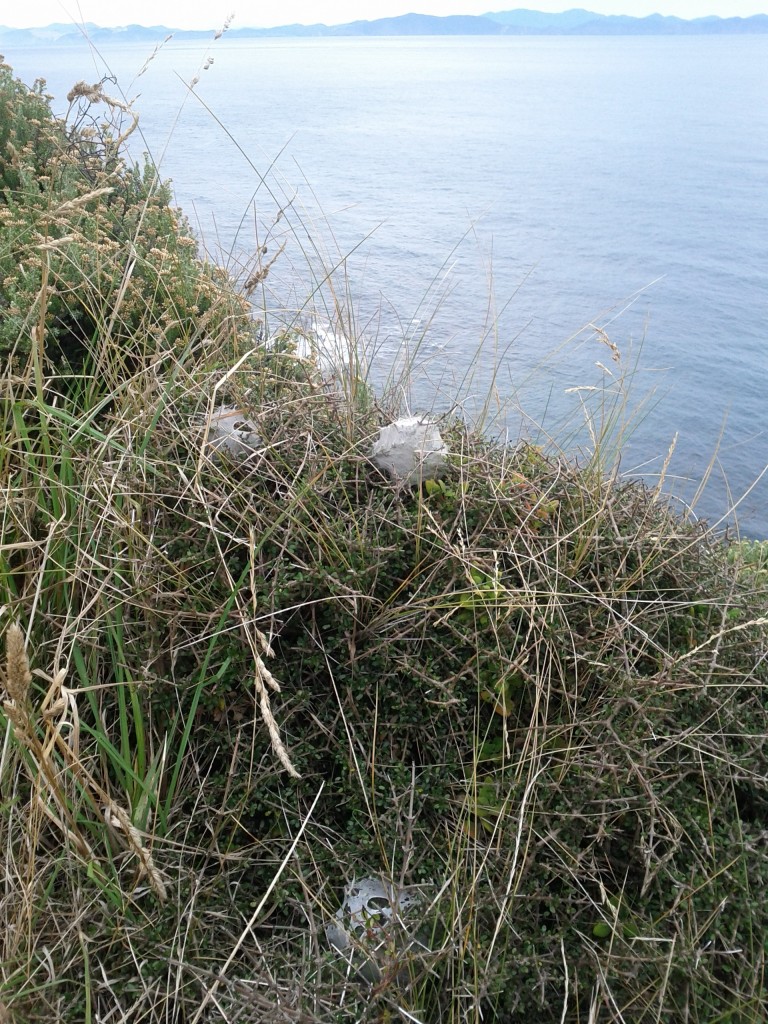 Based on the number of these spider nests around, I would *not* want to be doing this walk whenever it is that these things hatch :-/ Unfit Jethro is unfit and generally just a bit hot.

Whilst New Zealand never had enemy troops landing, we did have the odd axis vessel in our waters and a few shipping casualties and flyovers by German and Japanese craft.

During the war a number of gun emplacements were built to fend off invasion and there were American troops stationed in the country, although I don’t know why the Japanese and German forces wasted time/effort with New Zealand, it’s too far away from any action and Australia would be a much better target.

After the war these were mostly dismantled and the guns taken away, although the concrete emplacements were left as-is. 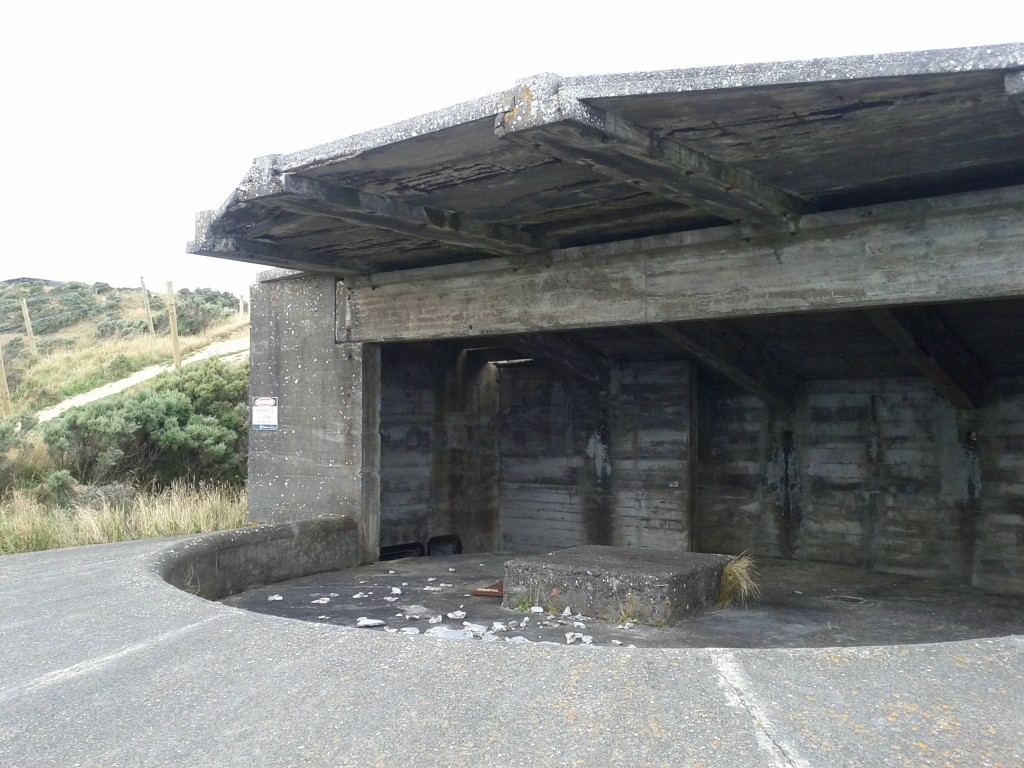 WW2 gun emplacements, sadly the guns are long gone, all that's left are decaying concrete structures, now fenced off due to their unstable nature. 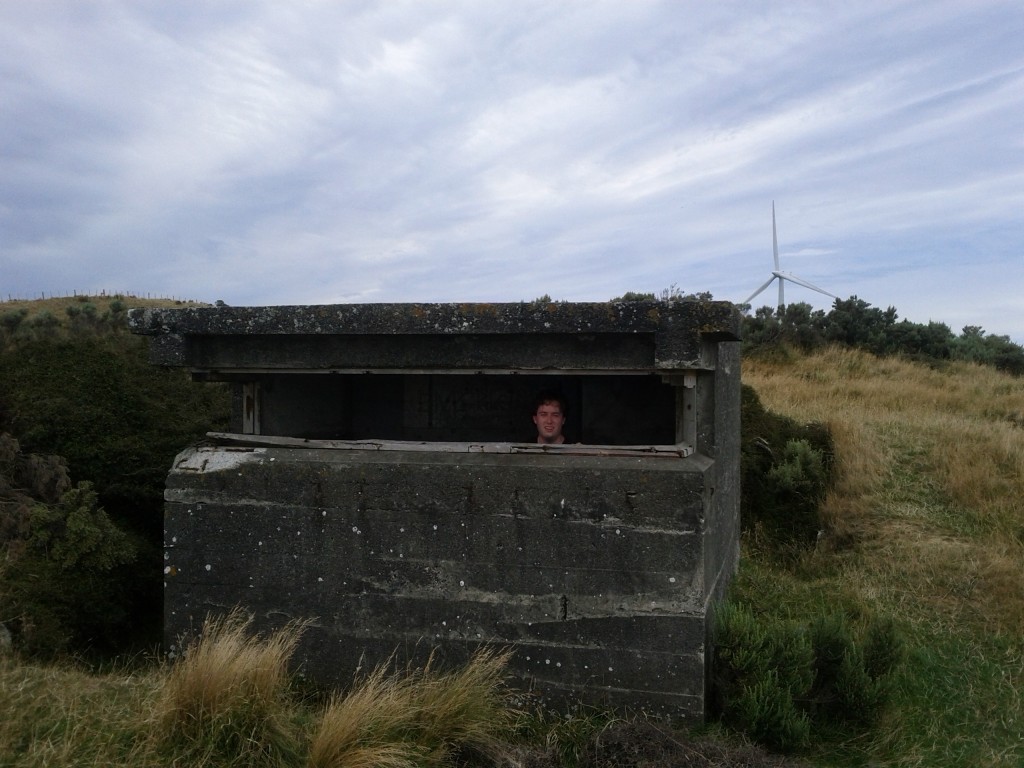 Friendly sheep! (Makara Farm is spread over these hills)

The other man-made attraction in this area is the modern Makara windfarm build in 2007-2009 and has 62 turbines producing up to 2.3MW each as Project West Wind (the budget did not extend to original project naming it seems).

I love wind turbines, they look pretty over a countryside, are a clean and effective form of generating power and combined with hydro, could allow New Zealand’s energy production to become completely sustainable.

This particular wind farm had history dating back to 1995 and a number of fights with a group known as the Makara Guardians, made up of a lot of the residents of the area to fight the turbine installation.

This particular selfishness of groups like Makara Guardians really gets to me, New Zealand needs energy and clean renewable sources such as wind and hydro are the best way for us to get them, yet they’re opposed thanks to the “not in our backyard” mentality and quoting invalid pseudoscience to try and justify their arrogance. Would they prefer a coal plant in Makara? Or no power?

Thankfully the environment court ruled in favor of allowing the project to go forwards so the farm was built and from what I see, with minimal impact to the landscape and environment – the sites of each turbine are tidy and minimal and without unpleasant overhead wires between each turbine.

They are also amazingly quiet, it was a light breezy day day, but we couldn’t hear anything until right up close to them and even then they were still far quieter than on-street car noise or other city sounds. These things are big! No geek could resist a functional diagram and pictures of construction! :-D

After geeking out at Turbines, we headed down to Ohau Bay and then along the coastline all the way back to Makara.

I will note that whilst the map earlier showed this as a path, it’s really not…. once on the beach, there’s a very minimal pathway that’s mostly covered by rubble from the hills or driftwood from the beach, and in a few places actually runs out entirely and the “path” ends up being climbing over rocks whilst the waves crash around you. I have no idea what happens at high tide, it might not be possible to cross some areas at all.

Whilst I got away with sneakers, it was really a case of barely… I’d highly recommend getting some decent walking/tramping boots if attempting this walk, particularly if there’s a chance that the weather might not be the greatest. Of course, I walked right though it. :-/ Yo dawg, we heard you liked driftwood, so we put some driftwood on your driftwood! Pretty in a bleak way. Apparently this counts as a "path" :-/ Wouldn't want to be out here during a storm.... Over all it was a great trip and certainly a bit more challenging walk than the usual well paved ones found around Wellington. It’s pretty exposed so you want some good weather, but if it’s a bit overcast it helps since there’s little shelter from the sun.