Since living in Sydney, I’ve been out to Manly a couple times, including for a walk around the North Head trails which showcase some of Australia’s military history and fortifications.

Manly has a lot going for it, offering great beaches, walking trails and a strong ecosystem of different shops and food venues. And with easy access from Circular Quay via a scenic 30minute ferry ride, it’s a great day outing for me, especially since Circular Quay is only a 20min walk from my flat.

One thing I have noticed on my ferry trips out to Manly, is that there’s a lot of scenic bush and bays all along the North Sydney coast time from the Sydney Harbour Bridge right out to Manly. I therefore decided to make Sydney CBD to Manly my next walking adventure in Sydney.

Of course, those readers familiar with Sydney will say – “but Jethro, that’s nuts, Manly is miles away!”.  Well dear reader, I can confirm for you – Manly is a painstaking 30.04km pain-inducing death-march from Sydney CBD, and I even have the GPS trail for you to follow if you wish to re-create this pain in your own life. :-)

It’s an extremely interesting walk, along the way you pass through opulent suburbs, the back of Sydney Zoo, numerous coves and beaches, a number of hills, bush, WW2 fortifications and two major bridges.

Please excuse the line breakage on the map – Google Track didn’t handle some GPS plot absences particular well, I’ve touched up as best as I can, but couldn’t figure out a way to connect segmented lines. There’s also the period from Spit Point Bridge to Manly itself where my phone battery died, so I’ve drawn in the lines to a mostly-accurate level, but it messes with the total distance stats reported and leaves some weird graphic artefacts.

It’s best viewed in the full Google Maps interface – I’ve tagged certain areas of interest, it’s also worth noting the location of Ferry docks, since there’s a number of good attractions that you may wish to ferry out directly to go and see.

I took a few photos along the way – the trip is very scenic, I really need to go back with a DSLR as I came across heaps of different things I would have loved to capture in a better level of quality.

Sadly Lisa didn’t want to join me on this walk for some strange reason, so you’ll have only pictures of pained geek and scenary, rather than any actual eye candy from my trip photos: 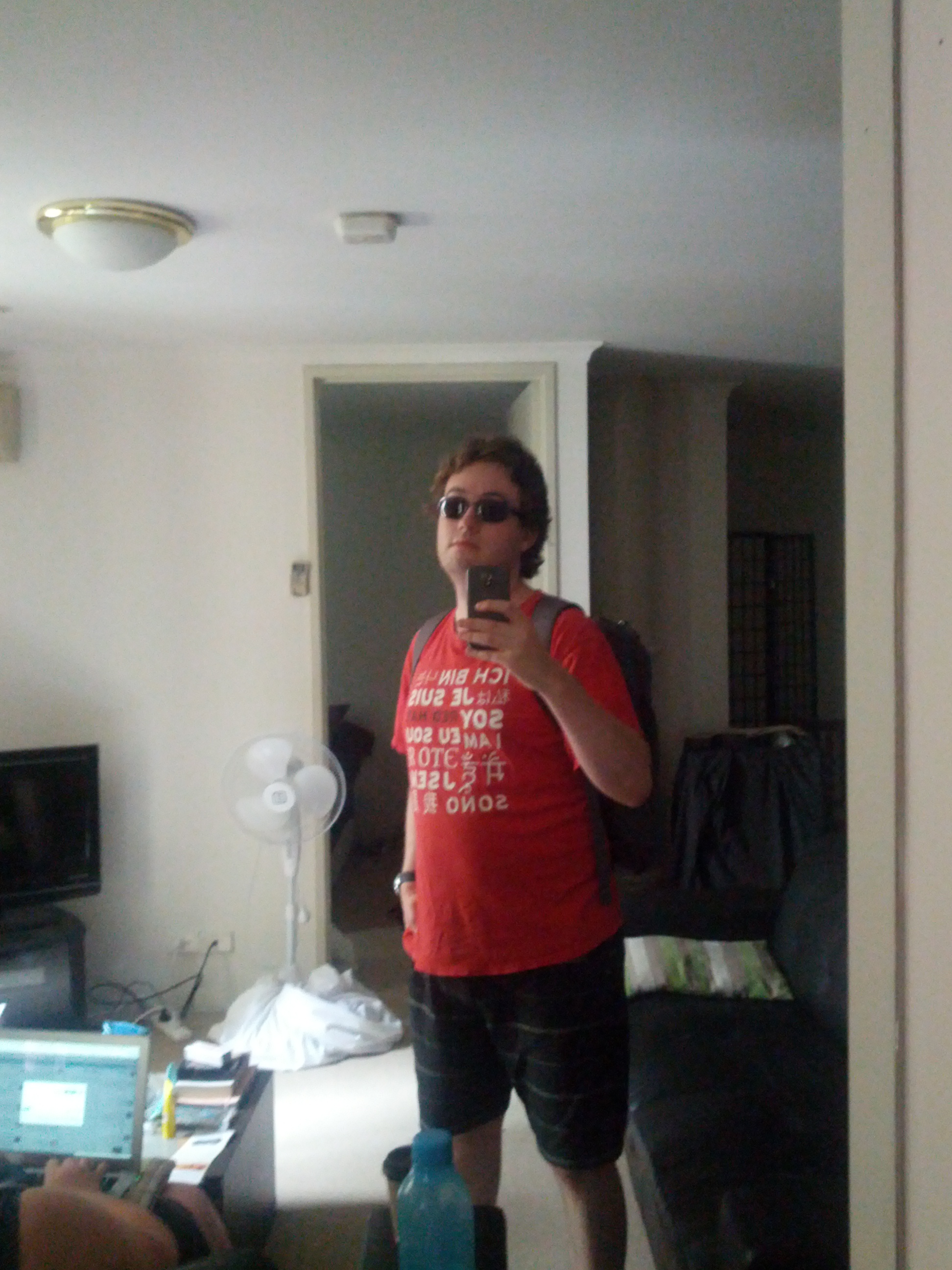 Full of optimism, I set forth from my apartment with my trust RedHat t-shirt to bring geek culture to the bush.

The first stage of the walk is through Sydney CBD and over the Sydney Harbour Bridge – I have plenty of photos from a previous walk across if you’re interested. The bridge is always an interesting stroll and only takes a couple minutes offering amazing views the whole time.

Once off the bridge in Milsons Point, the walk took me through the suburbs and coves directly around North Sydney. The area is certainly wealthy, but there’s odd pockets of housing or apartments that appear otherwise. 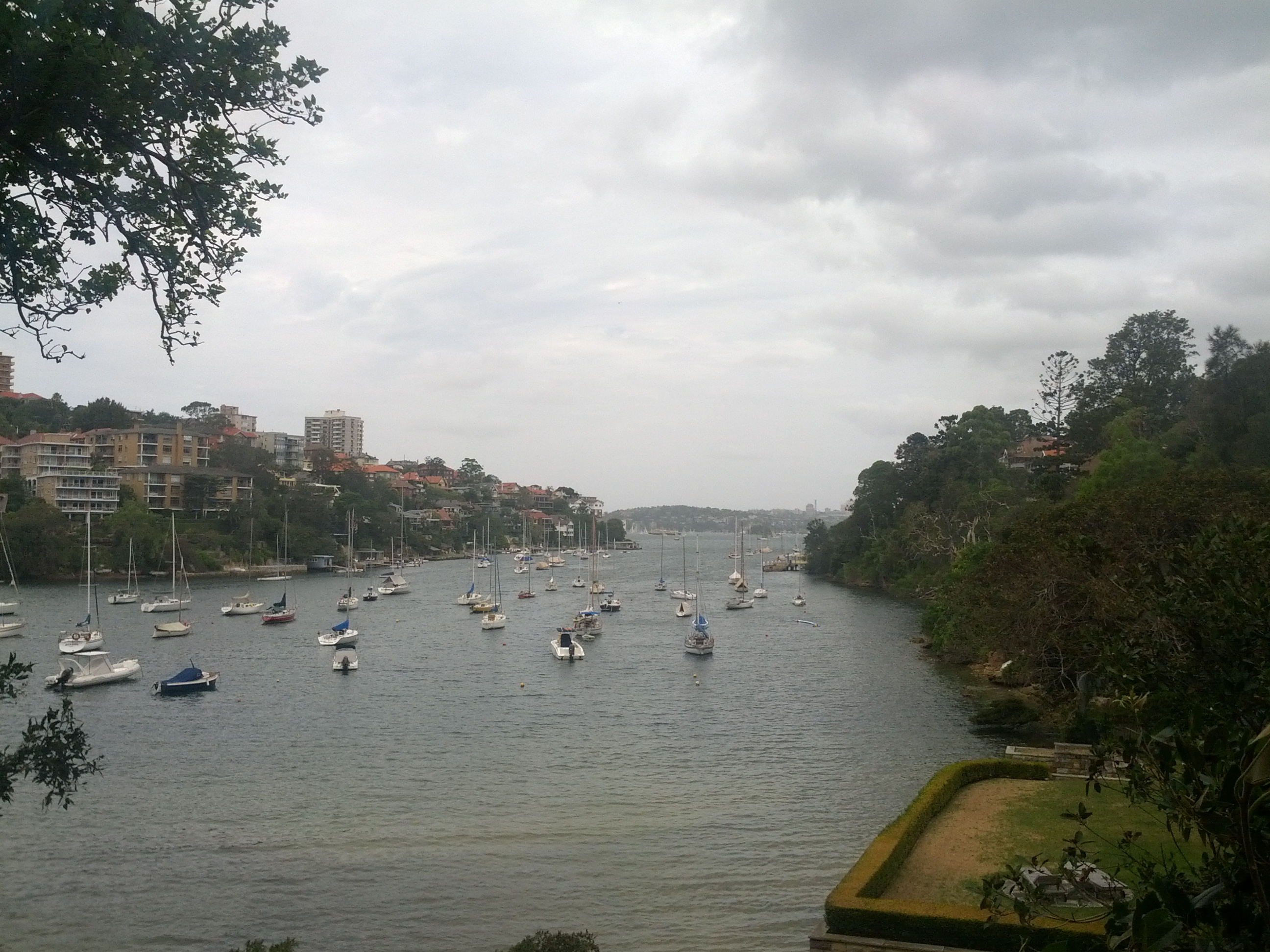 The whole route is littered with small coves and marinas like this one. 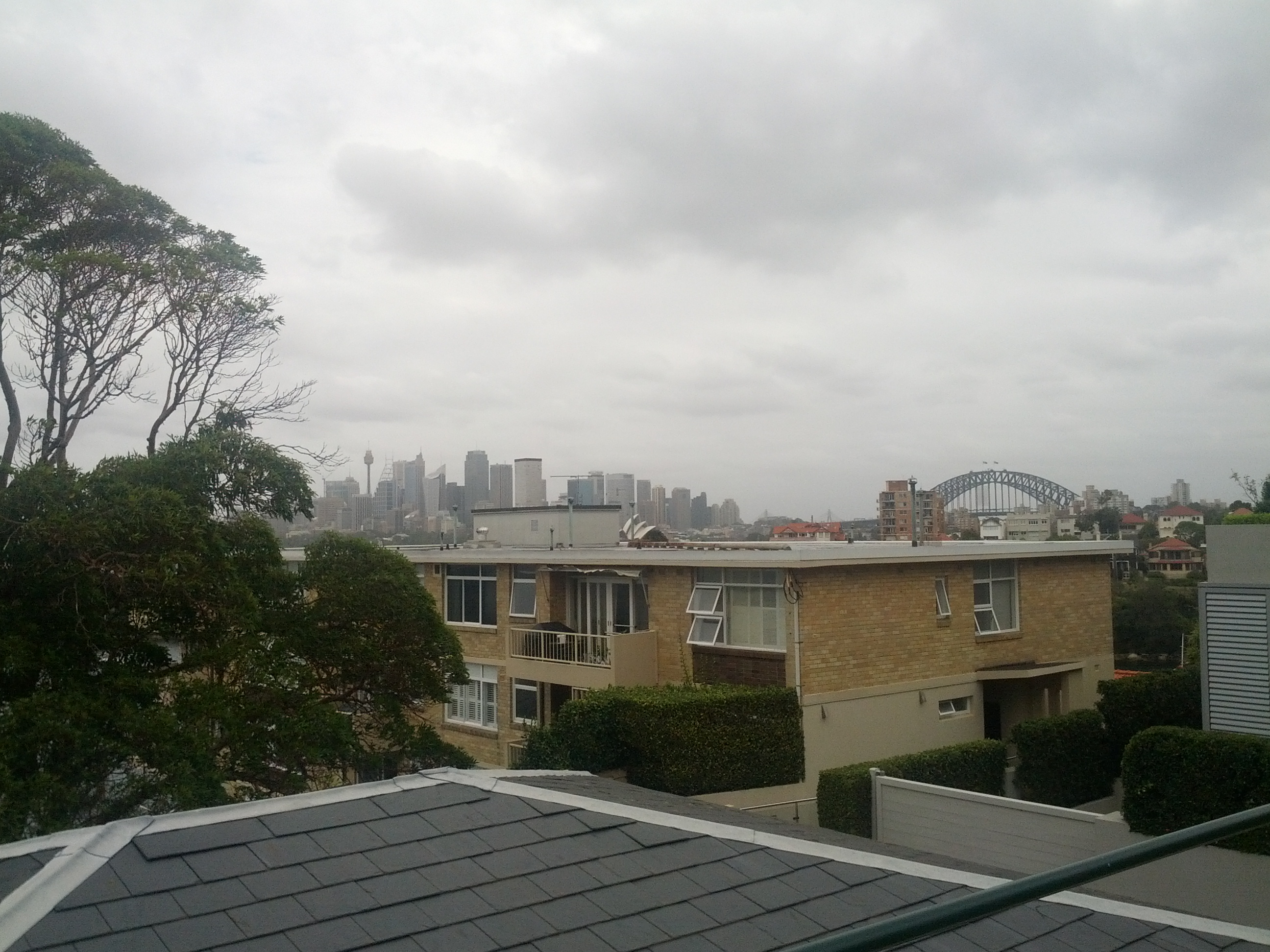 Looking out back towards Sydney 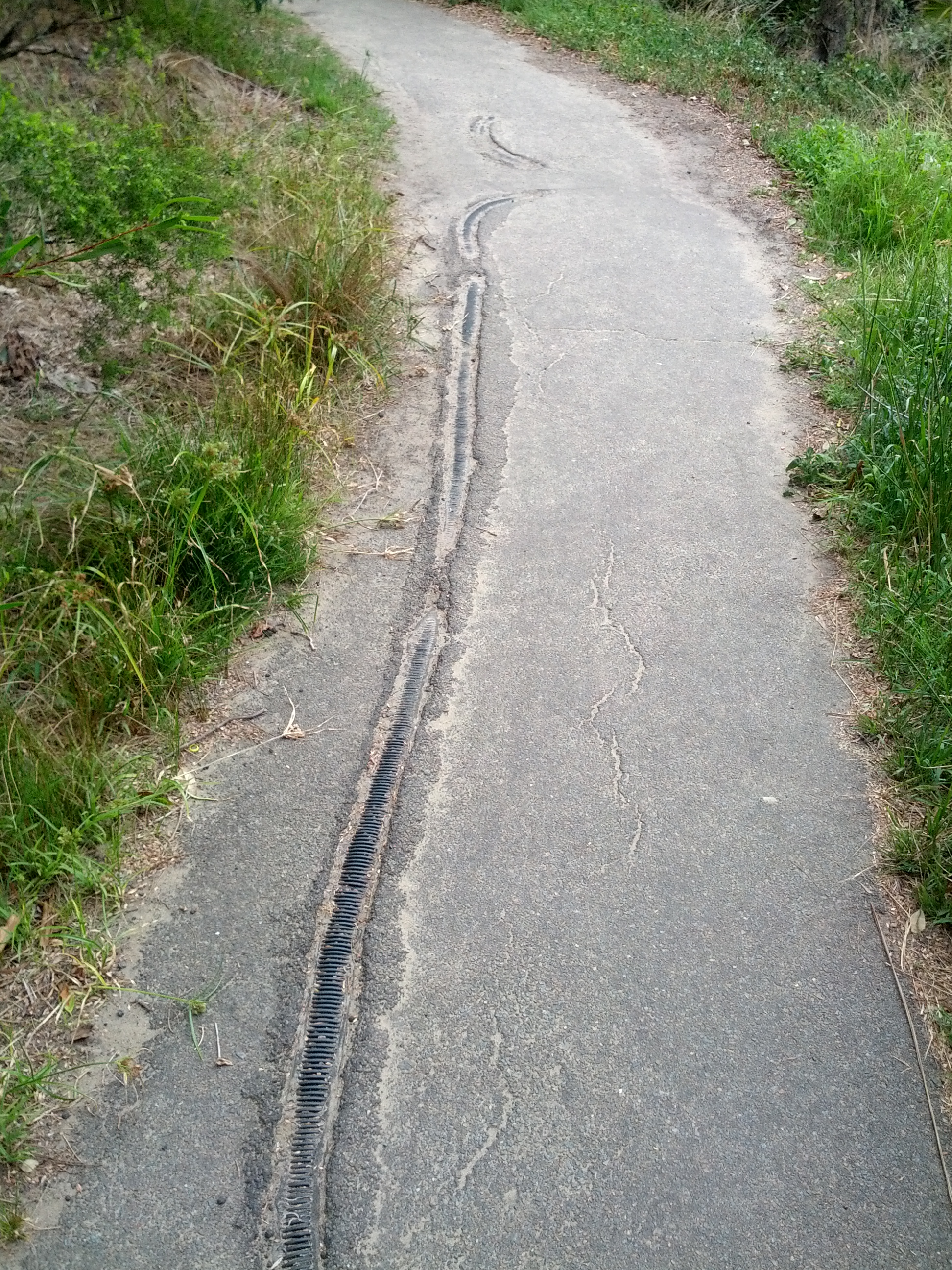 Amusingly odd to have man made items pushing their way through the path, rather than tree roots.

The walk through these suburbs is nice enough, but the real gold starts once the beach and coastline tracks start, these offer a much desired escape from the city noise and people and some amazing views of the harbour and Sydney itself. 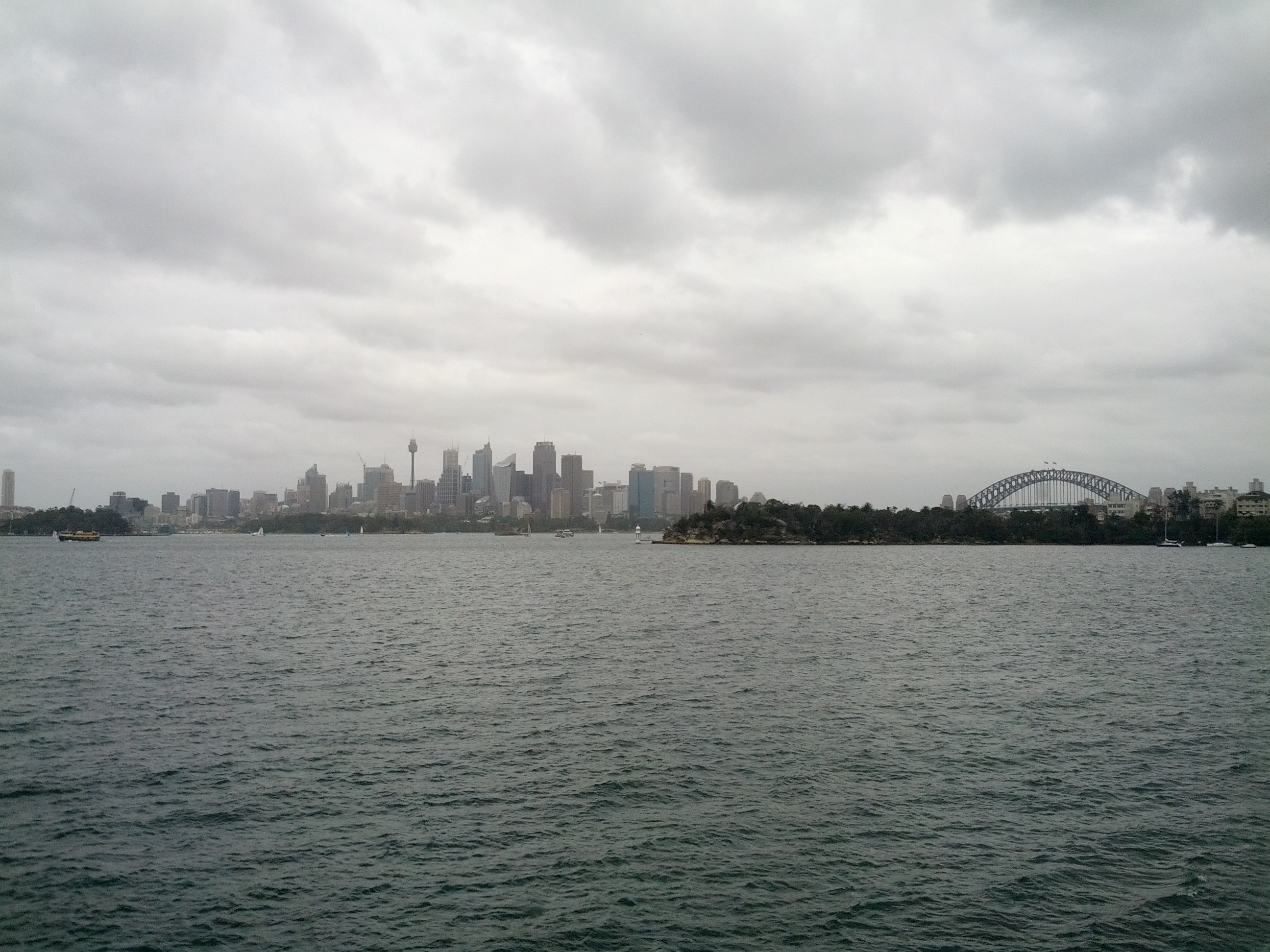 The walkways that have been installed behind the Sydney Zoo are particularly good, these paths are well formed and often form wooden stairs and walkways for a good few KM of coastline. 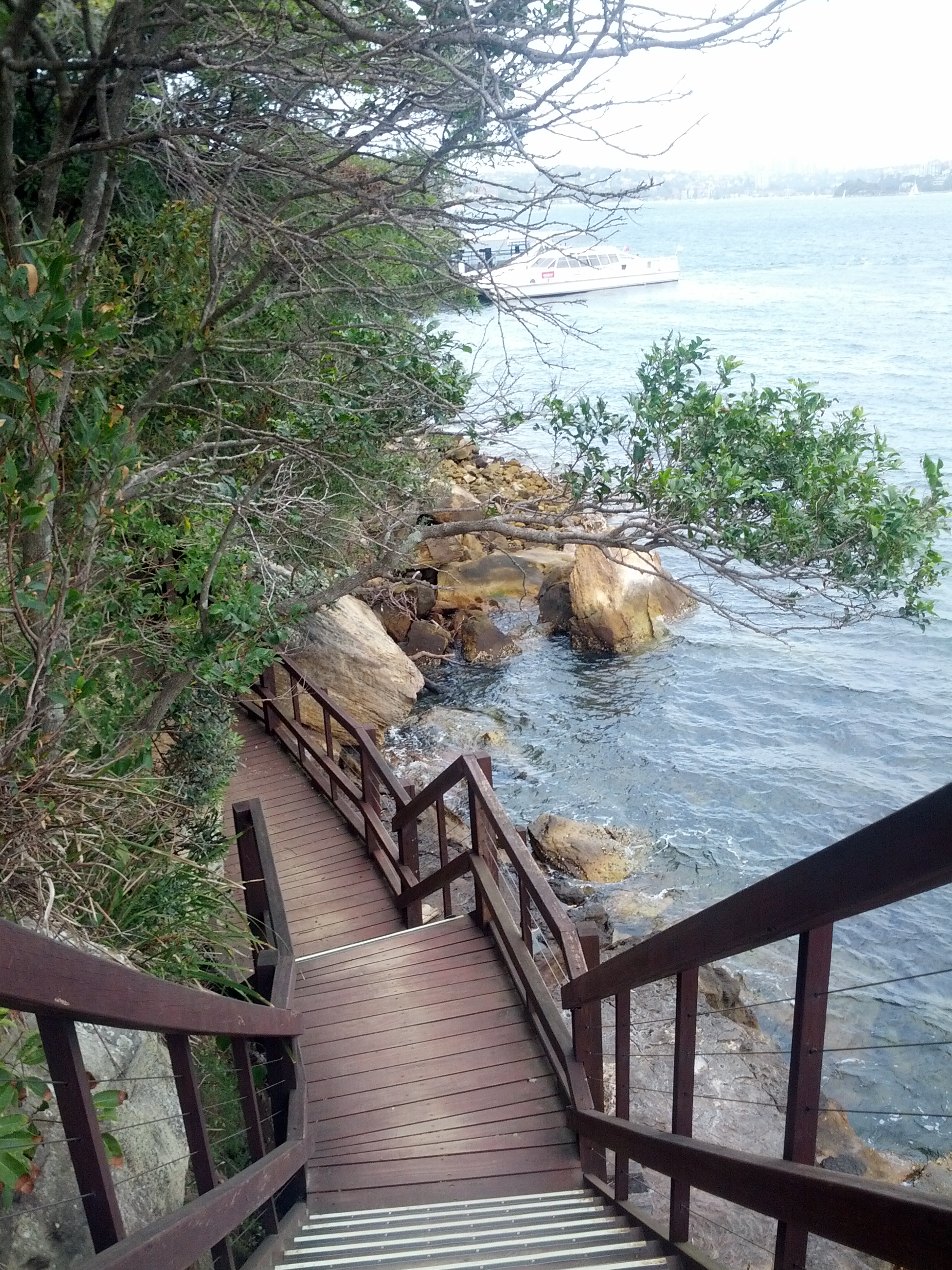 Walking out behind Sydney Zoo towards the ferry dock. 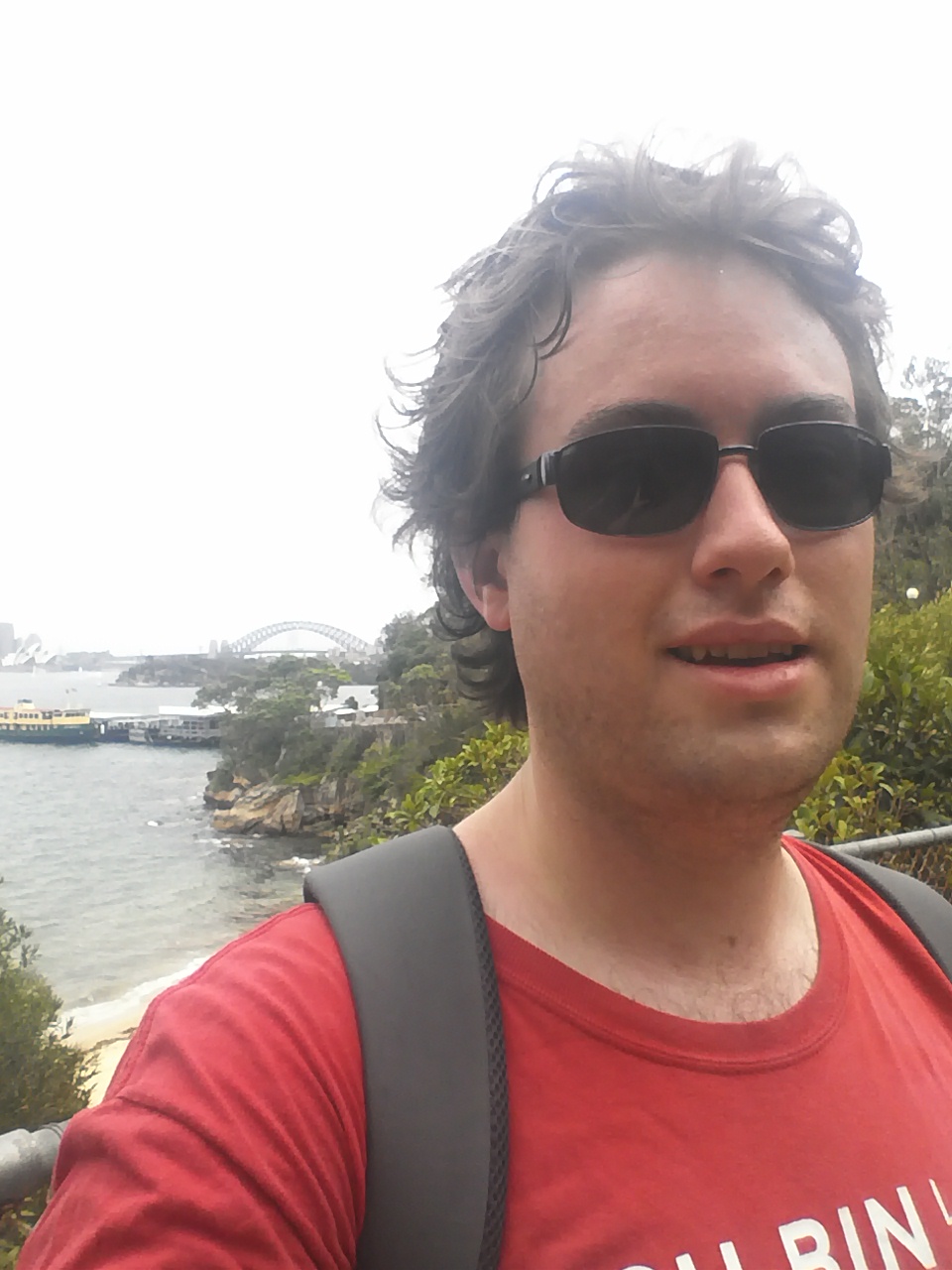 Thankfully the day was overcast and only low 20s, otherwise I’d be looking a lot worse for wear. A number of trees along the route with this weird base hollowing. 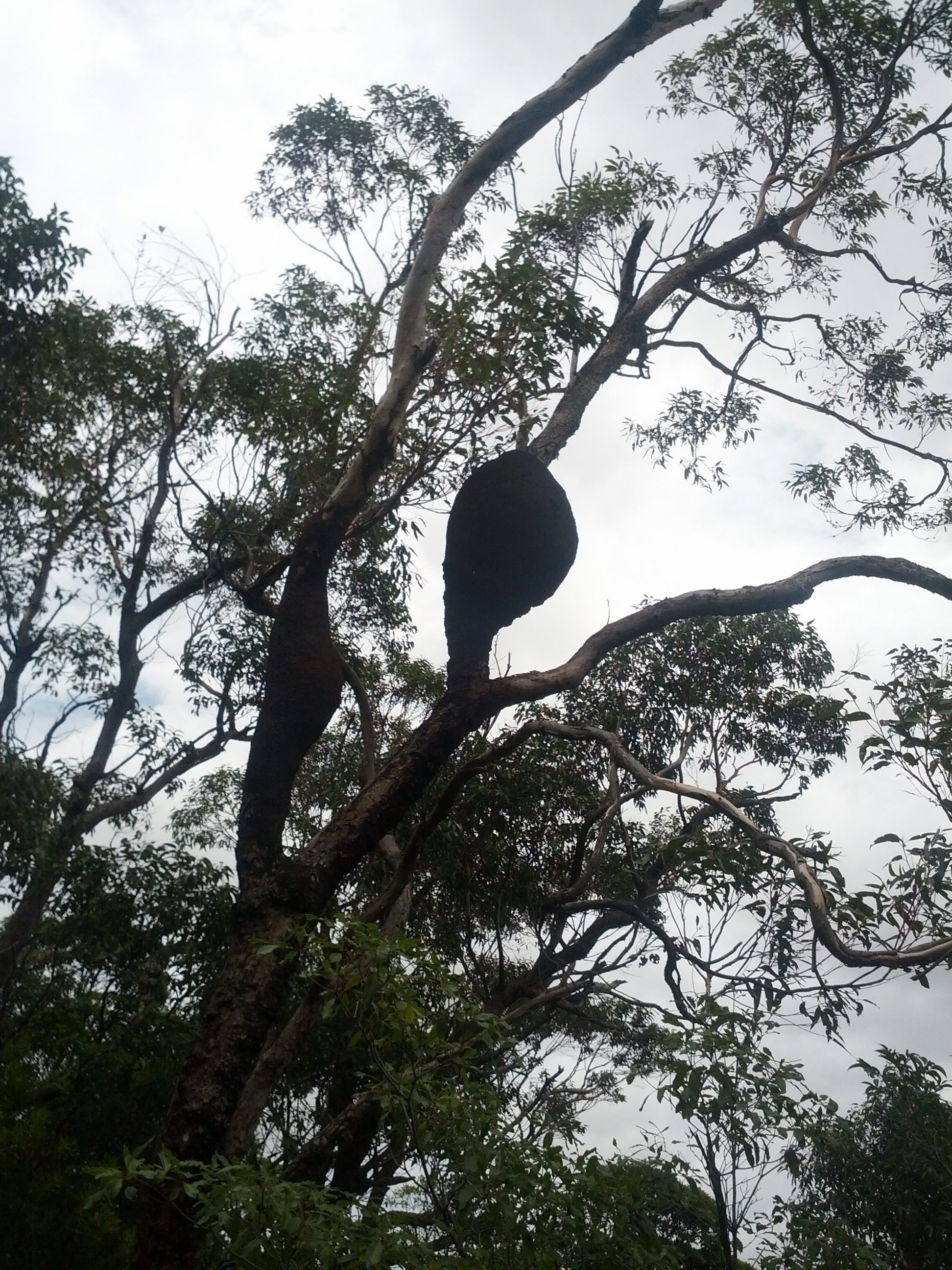 Also a number of trees with this weird growth on them – seems to be too many for them to be beehives… dropbear nests? 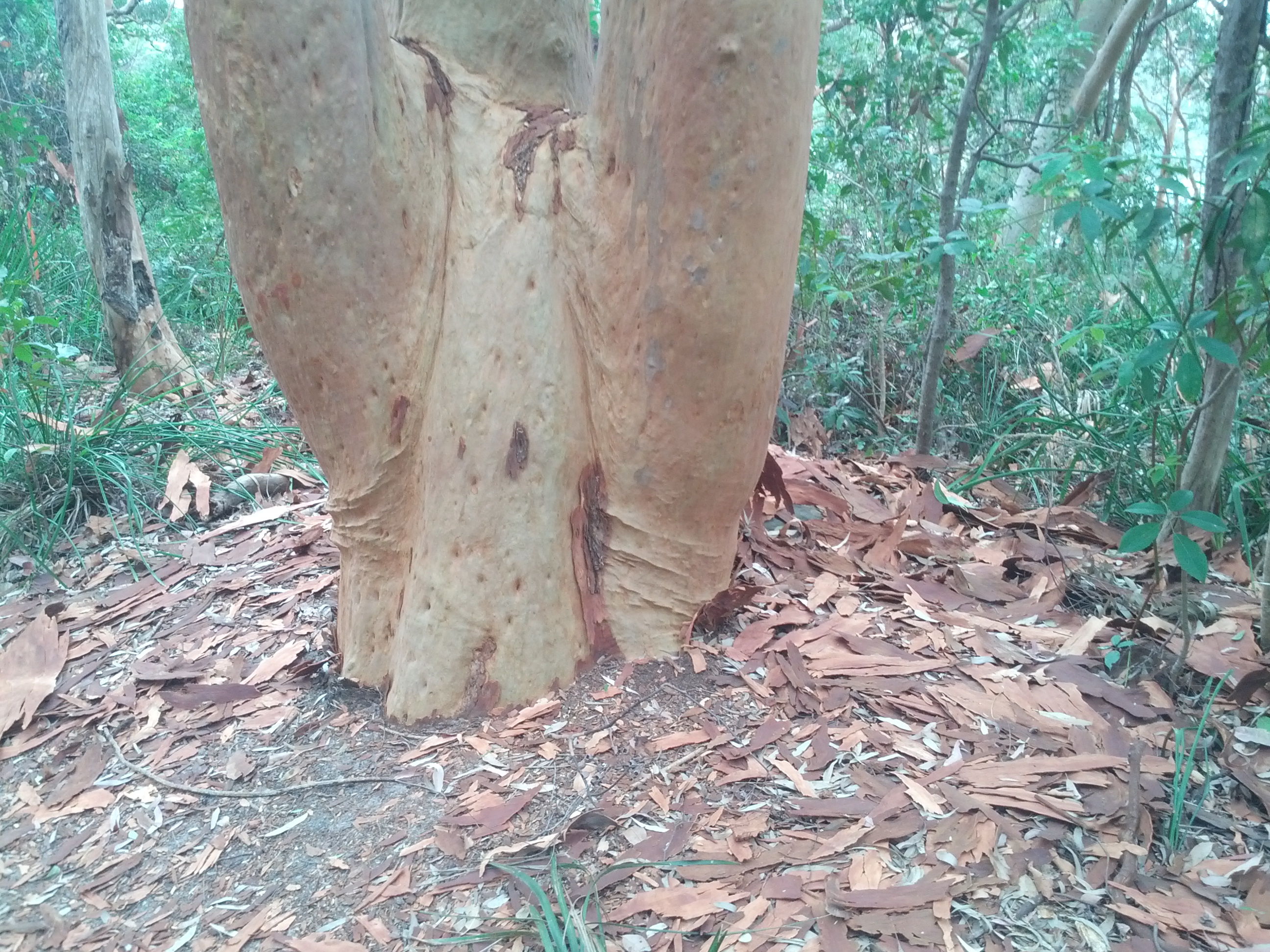 Weird bark stripped trees – came around many of these, the trees have all their bark stripped off and lying around them – unsure as to why.

Halfway between the Sydney Zoo and Chowder Bay where the well built Zoo trail ends, there’s Bradley Head, an area of parkland with a small lighthouse and the distinctive tripod mast from the original HMAS Sydney WW1 era ship. Following the coast around from Bradley’s Head and through Chowder Bay, leads to Middle Head, home of the Middle Head Fortifications that guarded Sydney Harbour. With direct line of sight to any ships attempting to pass through Sydney Harbour, it offered an ideal defensive location, featuring both cannon and disappearing guns – similar to the ones in Devonport NZ, however there’s no longer any guns located at Middle Head. 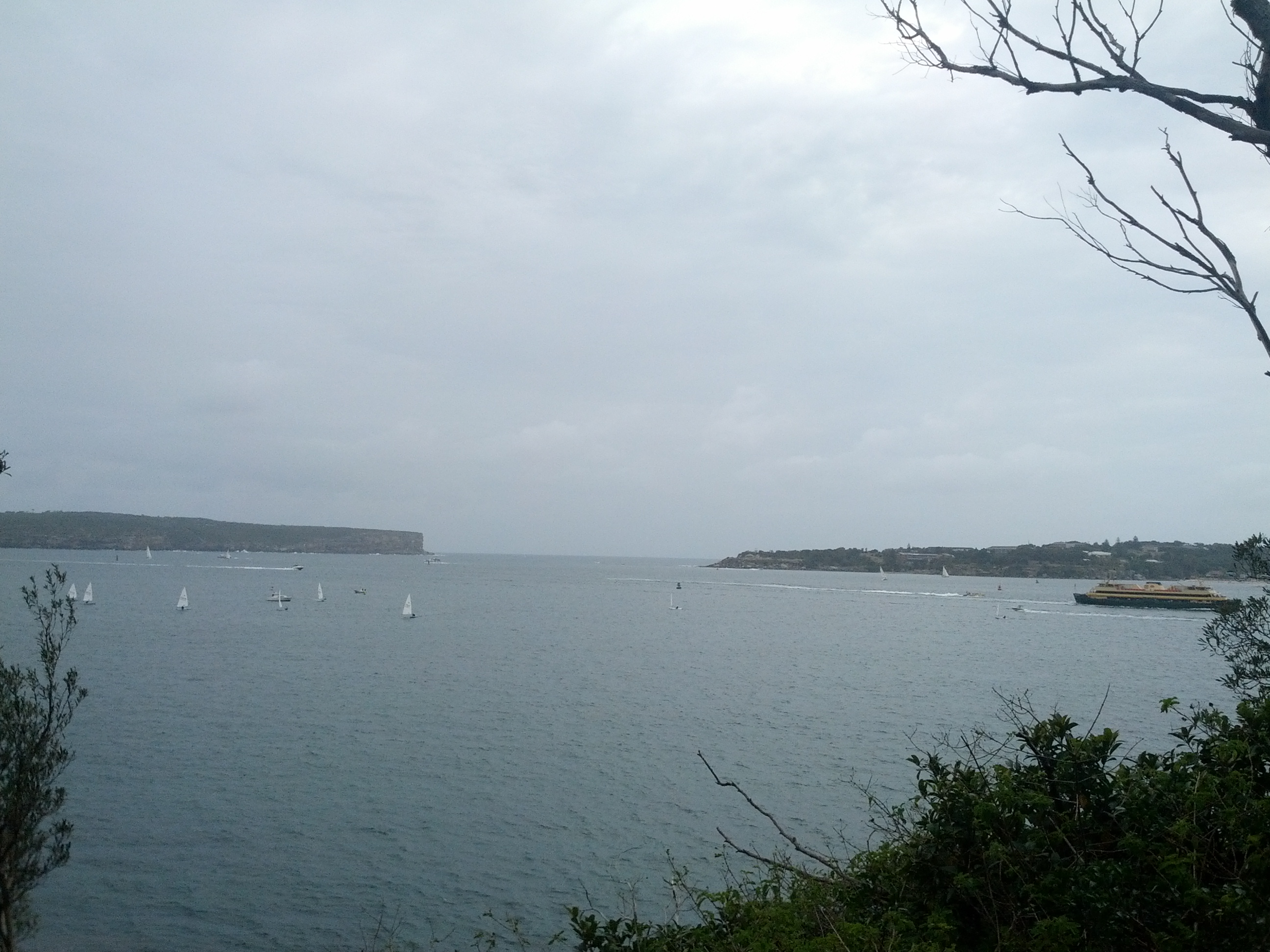 View out from Middle Head towards Sydney Heads, the entrance to Sydney Harbour. Old fortifications: everyone loves lying around in them with a balloon tied to their body. Unsure if this was a half-assed demolition job, or whether the building broke apart over the years. Geek, with exercise add-on. At this stage I was feeling a little tired, but still needed to head down to Hunters Bay, and then back up a big hill before I could then go down across Spit Point Bridge.

There’s quite a bit of stuff to explore out at Middle Head, it’s something that I’ll have to make another visit to in future to properly explore – there’s no quick ferry route to Middle Head, closest terminals appear to be either the zoo dock, which will require a few more KM of (pleasant) walking. Walking down towards Spit Bridge. Just about every cove I see has a marina situated in it, must be almost as many boats as cars in Sydney.

The walk along Spit Rd to the Spit Bridge isn’t particularly great, as it’s a main road (2x 2-lanes roads) the way down, so this section of walk has all the charms of walking alongside a motorway, however it’s the only way across (short of swimming). Spit Point Bridge! I just managed to run across as the lights were flashing before it started lifting. Around this time my phone decided it didn’t want to handle more than 4 hours doing GPS track plotting and died, so the remainder of my walk to Manly has been drawn in manually on the Google Map above.

There is a coastal route the whole way from Spit Point Bridge to Manly, at about 10km. Having already done 22km by this stage and it getting late, I decided to cut back across some of the suburbs, rather than finding my way though the unfamiliar suburbs and do a shorter 7km trip.

In hindsight I should have continued up Spit Rd and onto Sydney Rd, taking the coast path part of the way made the walk back up to join Sydney Rd longer and harder than it needed to be. Pain, oh god the pain. In some ways it was good that my phone died, so that pictures of me looking even worse couldn’t be taken.

I’m keen to do the proper Spit Bridge to Manly walk, so maybe I’ll make that segment a separate trip one day, or if I’m ever crazy enough, re-try the walk starting from Manly and walking back to the city.

I eventually made it into Manly, rapidly devouring an iced bun (mmm delicious 2000+ kJ energy) and a coke, the champion feed of any athlete (I was out of muesli bars ok!!) and got the ferry back to Circular Quay.

Being able to sit at the stern of the ferry and see all the coves I had walked around during the 30mins ferry journey back was actually incredibly relaxing, certainly a good ending to the trip. The only problem is that the half hour break in walking meant that my body started cooling down and it was not pleasant getting moving once back at Circular Quay. I managed to strain one of my ankles slightly – the rest of me hurts like crazy, but in the usual exercise way, so it should come right in the next couple of days.

General stats from the trip – I averaged 5.21km/h walking speed – my actual walking speed is more around 5.9km/h, I suspect time spent looking at sights and suburban traffic lights messed with those stats somewhat.

The total distance was 30.5km (some GPS measurement inaccuracies in that of course) – if I was able to keep that rate up daily, I would be able to walk from Wellington to Auckland in one month (of course reality is that there is a lot more time needed for breaks, detors, difficult terrain, etc).

I’d certainly recommend parts of this walk to anyone interested – however you have to be fucking nuts to do the whole thing like I did – I’m still hobbling around my apartment like an old man in pain.

2 Responses to Sydney CBD to Manly