I’ve been using Google for search for years, however it’s the first time I’ve ever come across a DMCA takedown notice included in the results.

Possibly not helped by the fact that Google is so good at finding what I want, that I don’t tend to scroll down more than the first few entries 99% of the time, so it’s easy to miss things at the bottom of the page. 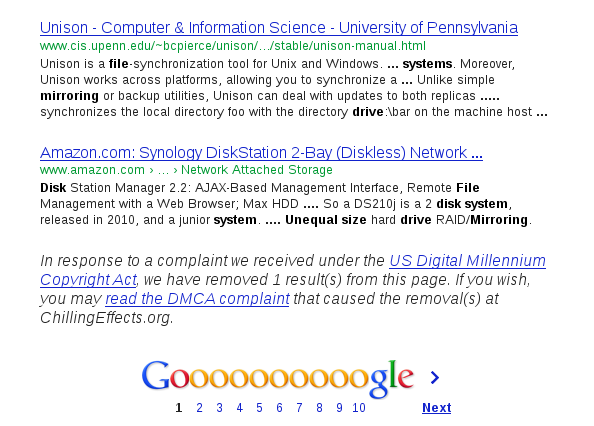 Turns out that Google has been doing this since around 2002 and there’s a form process you can follow with Google to file a notice to request a search result removal.

Sadly I suspect that we are going to see more and more situations like this as governments introduce tighter internet censorship laws and key internet gatekeepers like Google are going to follow along with whatever they get told to do.

Whilst people working at Google may truly subscribe to the “Don’t be evil” slogan, the fundamental fact is that Google is a US-based company that is legally required to do what’s best for the shareholders – and the best thing for the shareholders is to not try and fight the government over legalization, but to implement as needed and keep selling advertising.

In response to concerns about Google over privacy, I’ve seen a number of people to shift to new options, such as the increasingly popular and open-source friendly Duck Duck Go search engine, or even Microsoft’s Bing which isn’t too bad at getting decent results with a UI looking much more like early Google.

However these alternatives all suffer from the same fundamental problem – they’re centralized gatekeepers who can be censored or controlled – and then there’s the fact that a centralised entity can track so much about your online browsing. Replacing Google with another company will just leave us in the same position in 10 years time.

Lately I’ve been seeking to remove all the centralized providers from my online life, moving to self-run and federated services – basic stuff like running my own email, instant messaging (XMPP), but also more complex “cloud” services being delivered by federated or self-run servers for tasks such as browser syncing, avatar handling, contacts sync, avoiding URL shortners and quitting or replacing social networks.

The next big one of the list is finding an open source and federated search solution – I’m currently running tests with a search engine called YaCy, which is a peer-to-peer decentralised search engine that is made up of thousands of independent servers, sharing information between themselves.

To use YaCy, you download and run your own server, set it’s search indexing behavior and let it run and share results with other servers (it’s also possible to run it in a disconnected mode for indexing your internal private networks).

The YaCy homepage has an excellent write up of their philiosophy and design fundamentals for the application.

It’s still a bit rough, I think the search results could be better – but this is something that having more nodes will certainly help with and the idea is promising – I’m planning to setup a public instance on my server in the near future for adding all my sites to the index and providing a good test of it’s feasibility.